With season four in full swing, I’m feeling pretty Plus Ultra about My Hero Academia! You guys adored my article analyzing Bakugo’s personality type, so I figured it was time to revisit the world of quirks and superheroes with a long-overdue Type Casting! 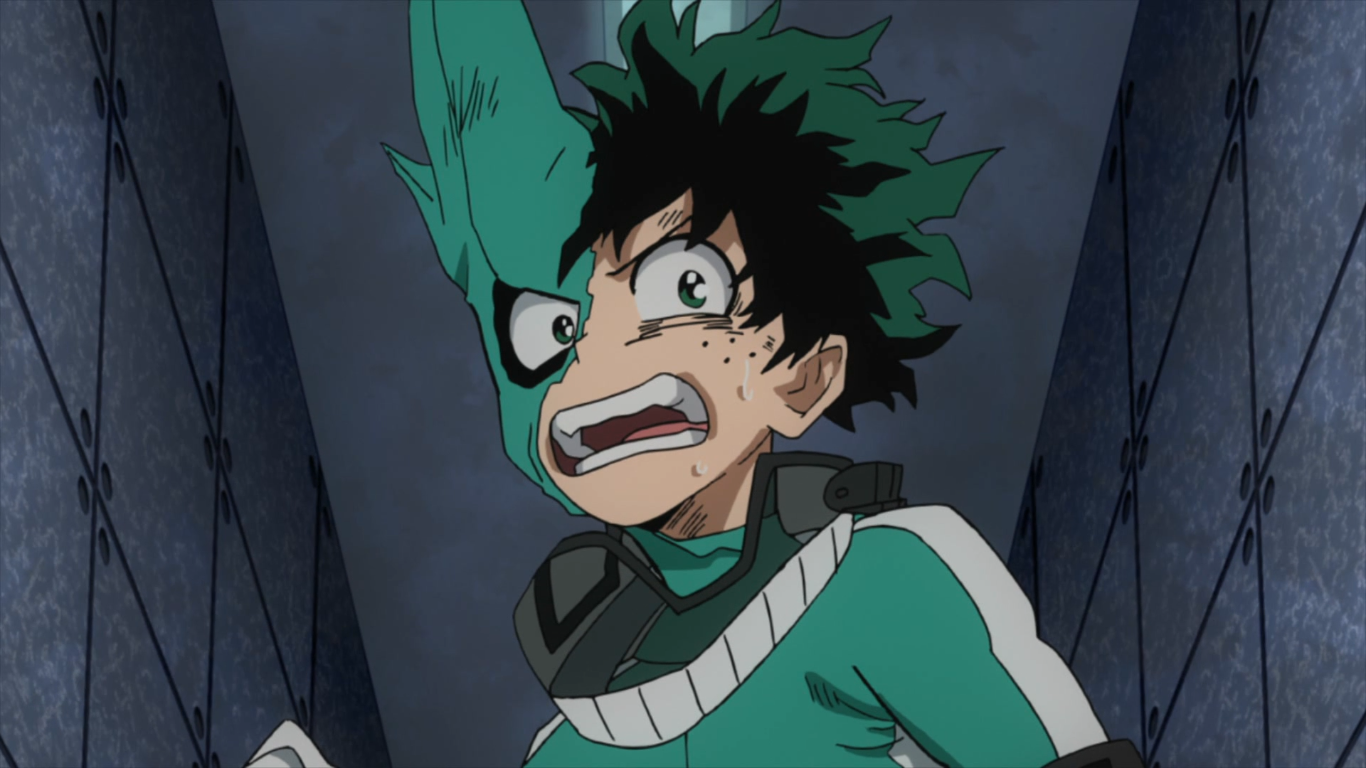 Upon first glance, Midoriya appears to be a textbook Type Five. Fives are the thinking, analytical type, possessing vast knowledge on a subject and spending a majority of their time thinking about it, researching it, or discussing it with others.2 And given how Midoriya obsesses over superheroes… well, it seems like a no-brainer! 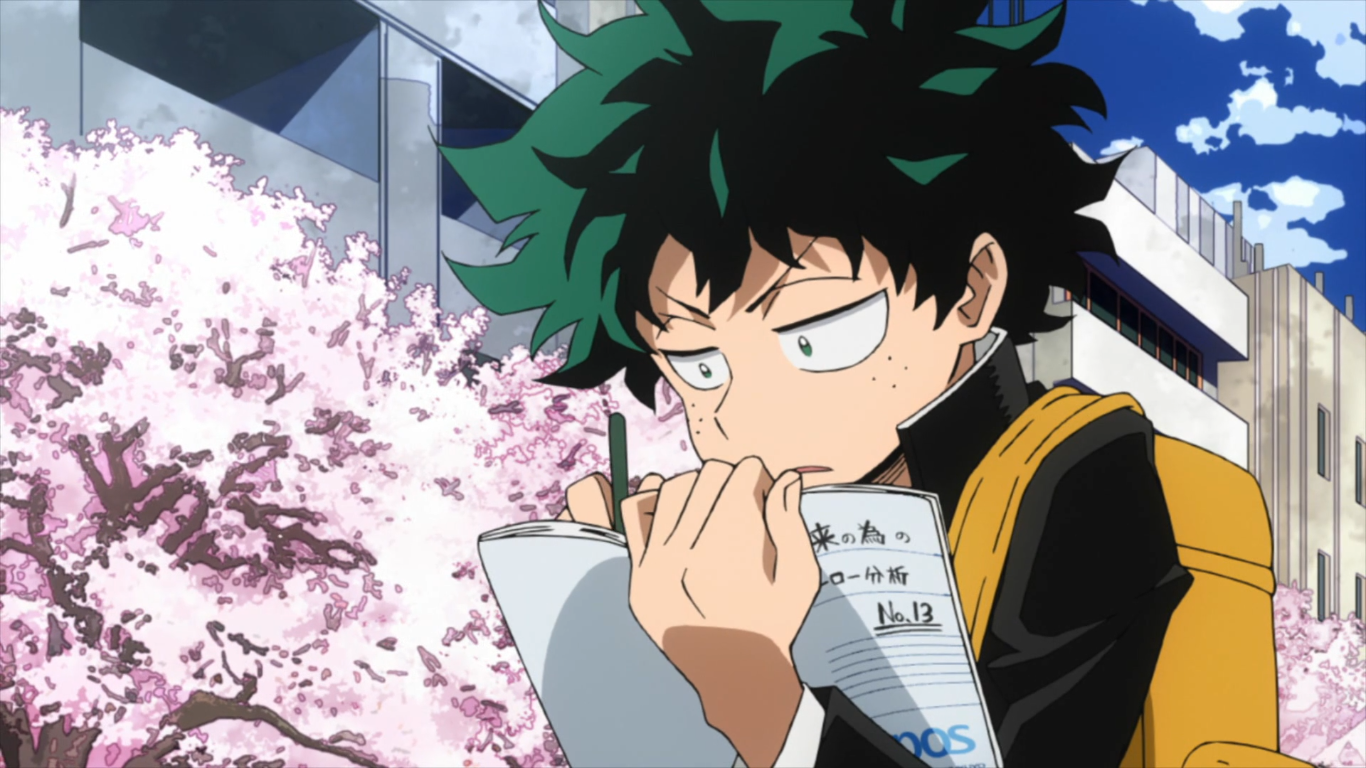 However, the Enneagram doesn’t measure a person by how they perform but why they do the things they do.

Let’s go full cowling on this one.

I assumed this Type Cast would be a breeze. There’s no character in My Hero Academia who does more thinking than Midoriya. From analyzing heroes and villains to coming up with solutions to even the toughest of challenges, Midoriya has an obsession with heroes, and all his classmates know it. 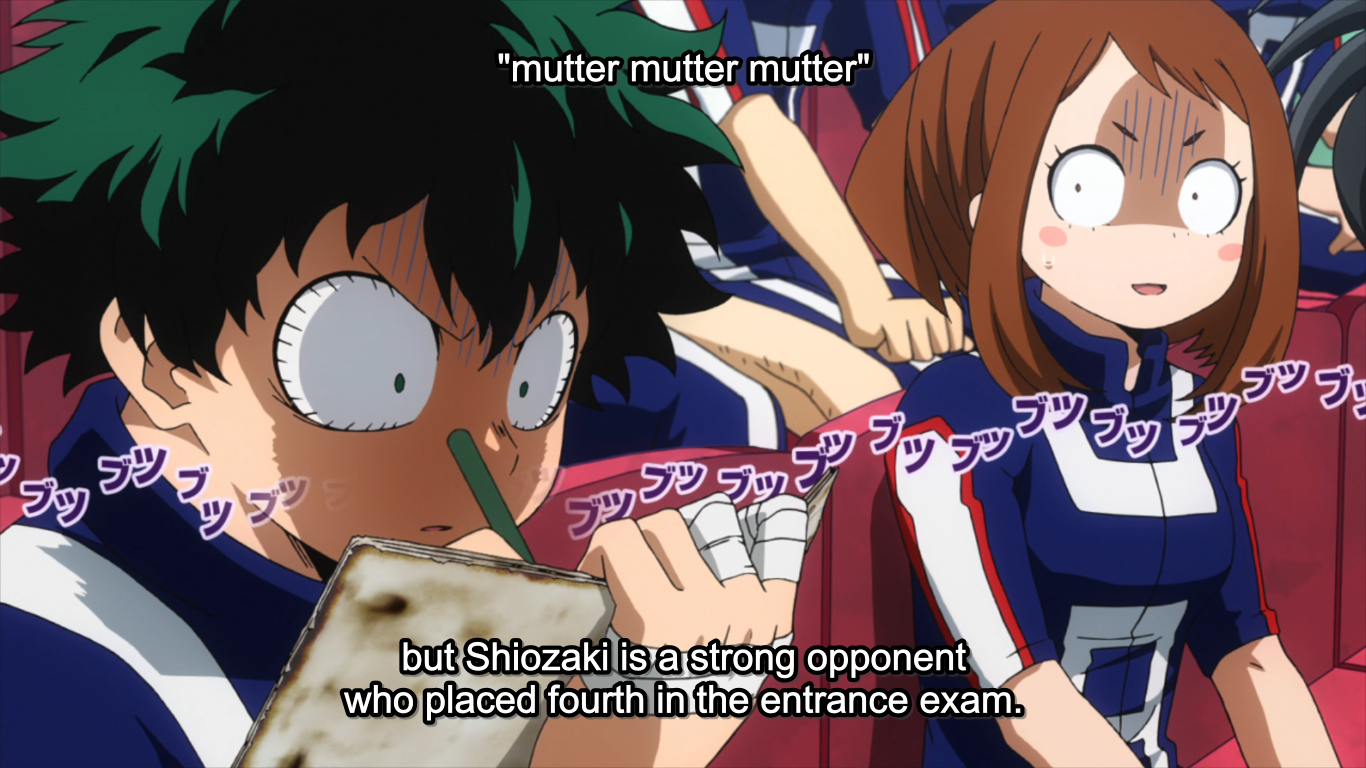 However, I quickly realized this typing might not be as clear-cut as I’d thought. While some elements of the Type Five’s description fit Midoriya perfectly, a good chunk didn’t quite match up. Take how the Enneagram Institute describes Fives’ reaction to their insecurities, for instance:


Behind Fives’ relentless pursuit of knowledge are deep insecurities… But rather than engage directly with activities that might bolster their confidence, Fives “take a step back” into their minds where they feel more capable…3

Midoriya does obsess over heroes and internalize much of the information he gathers about them, but rather than simply nurturing this “head-knowledge,” Midoriya is always quick to apply what he’s learned. Midoriya has plenty of insecurities, but he never deals with them solely by retreating into his mind.

In addition, “more than any other type, Fives want to find out why things are the way they are. They want to understand how the world works…”4 But Midoriya doesn’t possess this same dogged need to understand why heroes’ abilities work the way they do, nor why the hero world is built the way it is. Midoriya doesn’t need this “understanding” of the hero world… he just wants to know different abilities and a practical way to apply his knowledge.


[A Five’s] identity is built around “having ideas” and being someone who has something unusual and insightful to say. For this reason, Fives are not interested in exploring what is already familiar and well-established; rather, their attention is drawn to the unusual, the overlooked, the secret, the occult, the bizarre, the fantastic, the “unthinkable.” Investigating “unknown territory”—knowing something that others do not know, or creating something that no one has ever experienced—allows Fives to have a niche for themselves that no one else occupies.5

Again, this doesn’t seem to fit Midoriya; he doesn’t particularly care whether he’s the one coming up with new ideas, nor is he especially interested in making brand-new discoveries. And he certainly doesn’t concern himself with obtaining knowledge no one else has.

Hm. So maybe Midoriya wasn’t a Five after all. I began trying on other personality types to see what stuck.

Perhaps Midoriya was a One, who focus on being morally good. But… that fit even less than a Five. Ones are obsessed with judging themselves and others based on their perceptions of right and wrong, good and evil;6 and while that sounded promising at first, there’s one key problem: Midoriya is a decidedly non-judgmental person. Despite regularly standing up for what’s right, Midoriya never passes judgment on the villains he faces, instead solely focusing on protecting others. Not to mention, Ones are “focus[ed]… on making rules and procedures for the progress and improvement of themselves and their world.”7 But while Midoriya is always working to improve himself, it’s never for the sake of forming rules and procedures. No, a One’s core just didn’t fit Midoriya.

Well, if not a One, how about a Nine? Nines are renowned for their gentle natures and desires to create peace and resolve conflict. Sounded pretty similar to Midoriya’s desire to create a peaceful world where people can live in safety.

But this was problematic as well. You see, while Midoriya seeks inner stability, he doesn’t do so to the point of ignoring problems as Nines might:


[Nines] can… be too willing to go along with others to keep the peace. They want everything to go smoothly and be without conflict, but they can also tend to be complacent, simplifying problems and minimizing anything upsetting.8

Nines are not often reactive to the situations around them because they don’t want to make further waves.


Nines are… concerned with security and with maintaining some kind of status quo… Nines like to remain easy-going and unflappable. Nines… show little sign of being upset by the day’s ups and downs… [T]here is stubborn resistance and an unwillingness to be upset or troubled by conflicts or problems.9

And Midoriya lacks this quality entirely. Rather than calmly accepting situations so as not to disturb his inner sense of calm, if anything, Midoriya frequently overreacts to situations, such as during the provisional license exam when—despite his prior experience in real crises—he encounters a scripted “natural disaster” and cries out in concern, thus failing to ease the fears of a nearby actor posing as an injured civilian. 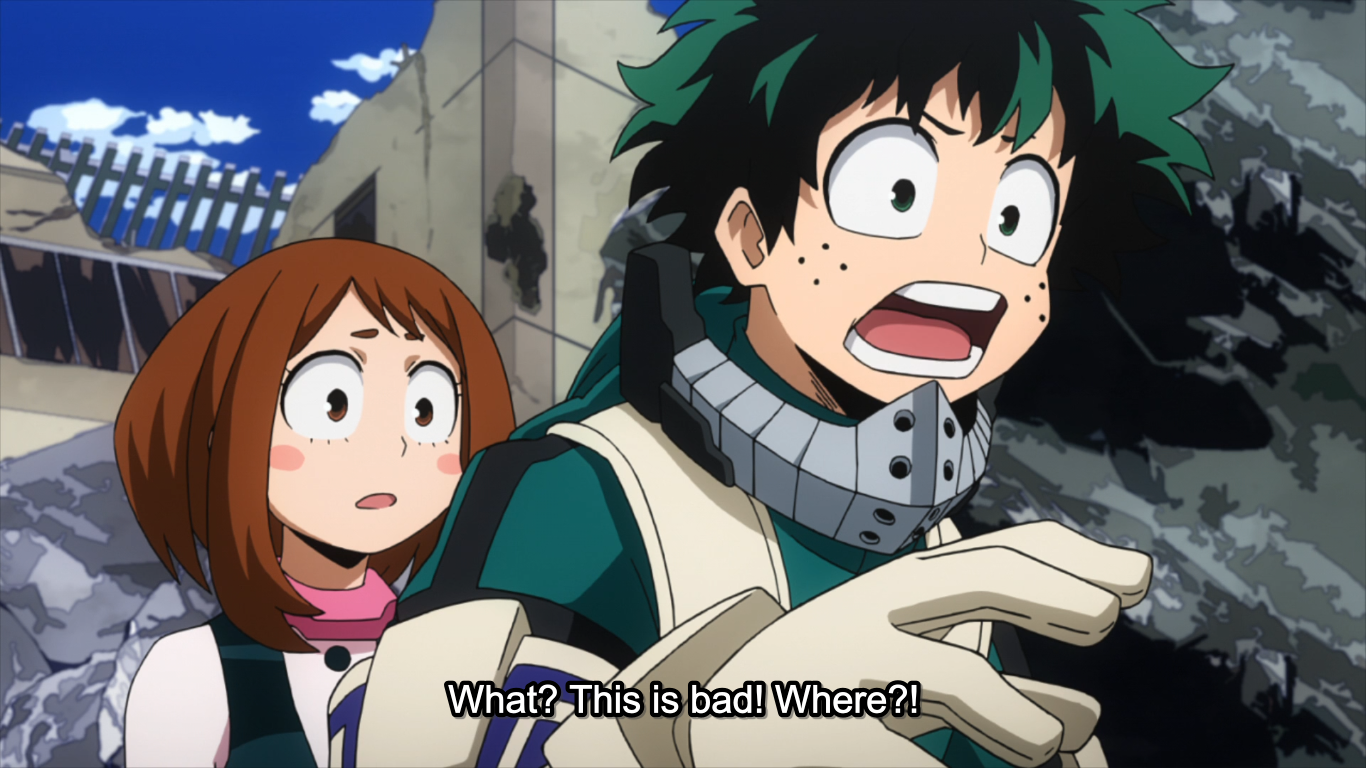 Five, One, Nine… I’d been over them all. And I’d already ruled out the fun-loving Seven or the dominating Eight. I was running out of types, but I still hadn’t found the one that clearly fit Midoriya. Had the Enneagram finally failed me?

No. I couldn’t give up yet. Once again I ran over Midoriya’s key qualities, searching for the answers that eluded me. Heightened observational skills… Practicality and a drive to act upon what he’s learned… Focus on security and protection… Emotional outbursts caused by fear…

This was all starting to sound vaguely familiar…

I knew a person’s basic fears could often be more helpful in Enneagram typing than any other qualities, so I began to focus on this aspect of Midoriya. What was the cause of his fearful outbursts?

Well, more often than not, his outcries were a result of his emotional distress and, on occasion, his anxiety regarding how to resolve a situation when he felt incapable of doing so. 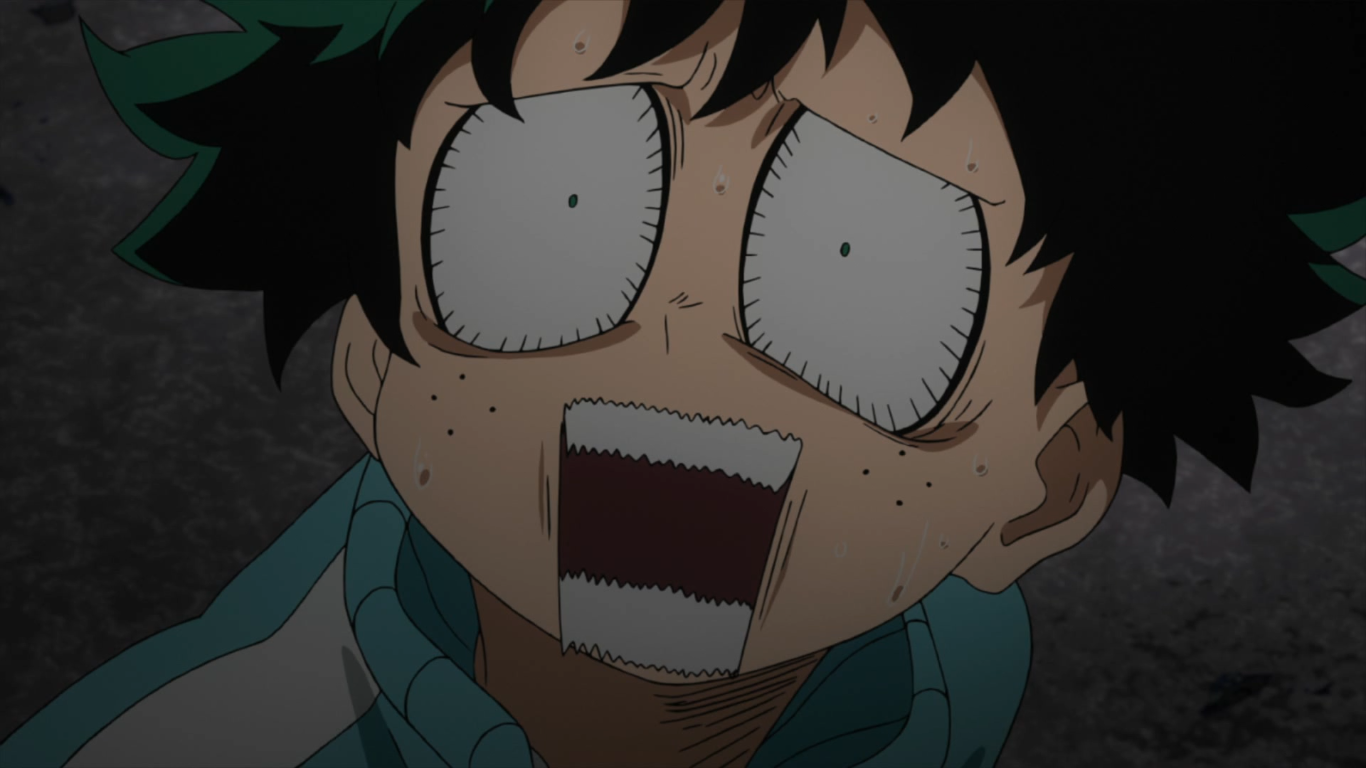 Debilitating insecurity and pervading anxiety… Could Midoriya be an anxiety-riddled Type Six?

Some of you may recall my first mention of Sixes in Mikasa Akerman’s Type Cast: Sixes are “[t]he committed, security-oriented type” according to the Enneagram Institute.10 Since a Six’s greatest desire is “[t]o have security and support,” their greatest fear is to be left “without support and guidance.”11

But while Mikasa is a poster child Six, constantly clinging to her anchor Eren to make sense of a cruel world crippling her with anxiety, Midoriya seems to lack this same obsessive fear and clingy behavior. Could these two vastly different characters really be the same personality type?

There was only way to find out: compare fearful Sixes with the type I had initially assumed Midoriya was, the cerebral Type Five.

As it turns out, Sixes and Fives actually have a lot in common; according to the Enneagram Institute, “Fives and Sixes are both Thinking types and, when educated, can both be quite intellectual.”12 However, there are a few key elements that differentiate these two personality types.

“Fives are, generally speaking, bolder than Sixes in their positions and creativity, but also far less practical… Sixes tend to be more linear and analytical in their thinking because they are interested in troubleshooting, in prediction, and in establishing methods that can be repeated.”13 So while Fives focus on the abstract and attempt to come up with creative concepts,14 Sixes are perfectly content to abide by established methods that have proven effective in the past;15 this is because Fives are more concerned with the thinking and/or concepts themselves, while for Sixes, thinking is just a means to an end: an exercise to come up with practical solutions they can then act upon.16

Again, we see that the Six’s focus on practical application is far more in line with Midoriya’s behavior than the impractical, abstract-thinking Type Five.

In addition, while Fives generally rely on their own personal research and expertise rather than on others’ (often thinking “‘everyone else is likely to be less well-informed’”),17 Sixes actually thrive in situations where they can learn from others and cite previous experience.18 Interestingly, this quality makes Sixes generally better-suited to the classroom than Fives:

Academia teaches students to work with advisors and mentors, to cite sources and back up arguments with quotes from authorities, to follow proper procedures in papers… all type Six values.19

And while Midoriya does collect a vast array of his own research firsthand, he also has no qualms learning from the prior experience of every hero (and villain) around him. Midoriya excels at learning, which results in his exponential growth in his capability as a hero, a trait his mentor All Might even explicitly points out.20, 21 This rapid growth is due to Midoriya’s observational skills, his ability to troubleshoot using others’ strengths to his advantage, and his tendency to seek out counsel and assistance when he recognizes he has a need. It’s Midoriya’s reliance on mentors like All Might, Gran Torino, Togata, and more recently Sir Nighteye that helps him expand his experience, his classroom prowess, and the extent of his abilities. In fact, Midoriya constantly relies on others’ expertise even over his own experiences.

Why? Because he does not trust his own experience or decision-making.

Midoriya constantly questions his ability to make the right call. He always puts himself down, attributing all his success to others and wondering whether any prowess he’s obtained was truly his to tout. Midoriya’s first instinct is to seek a resource beyond himself to rely on—just as Sixes become “frantic trying to find something to trust precisely because they do not trust their own minds to come to meaningful conclusions.”22 That is, they do not trust themselves.

The pieces were lining up, but assumptions had led me astray before. I’d have to go even deeper to determine Midoriya’s personality type once and for all… 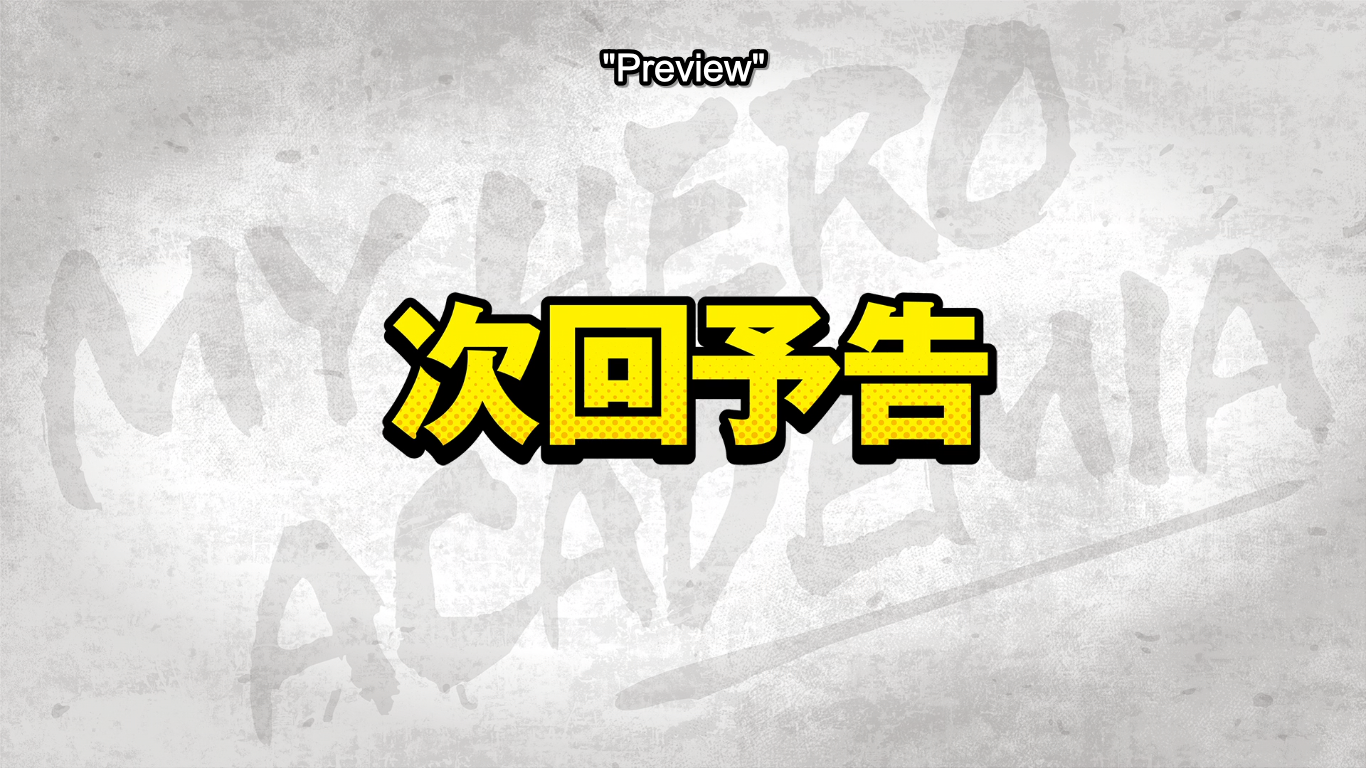 A crippling fear: to be left without guidance… A childhood dream to become the greatest hero… A hero’s ideals and why he fights to uphold them…

As I delve deeper into Midoriya’s subconscious, I find insecurities, childhood wounds, and a complicated friendship… But will they hold the answers I seek?

Go beyond! Plus Ultra!

---
Notes and References:
All photos taken from VRV.co; all .gifs are from Funimation.com unless otherwise specified. All images and footage are property of their respective owners; used under US “Fair Use” laws.

My Hero Academia and all related terms are the property of Funimation. And I am not affiliated with them.