The Attack on Titan anime

With Attack on Titan, there’s no character that tops official and unofficial fan favorite lists more than Levi Ackerman.1, 2, 3, 4 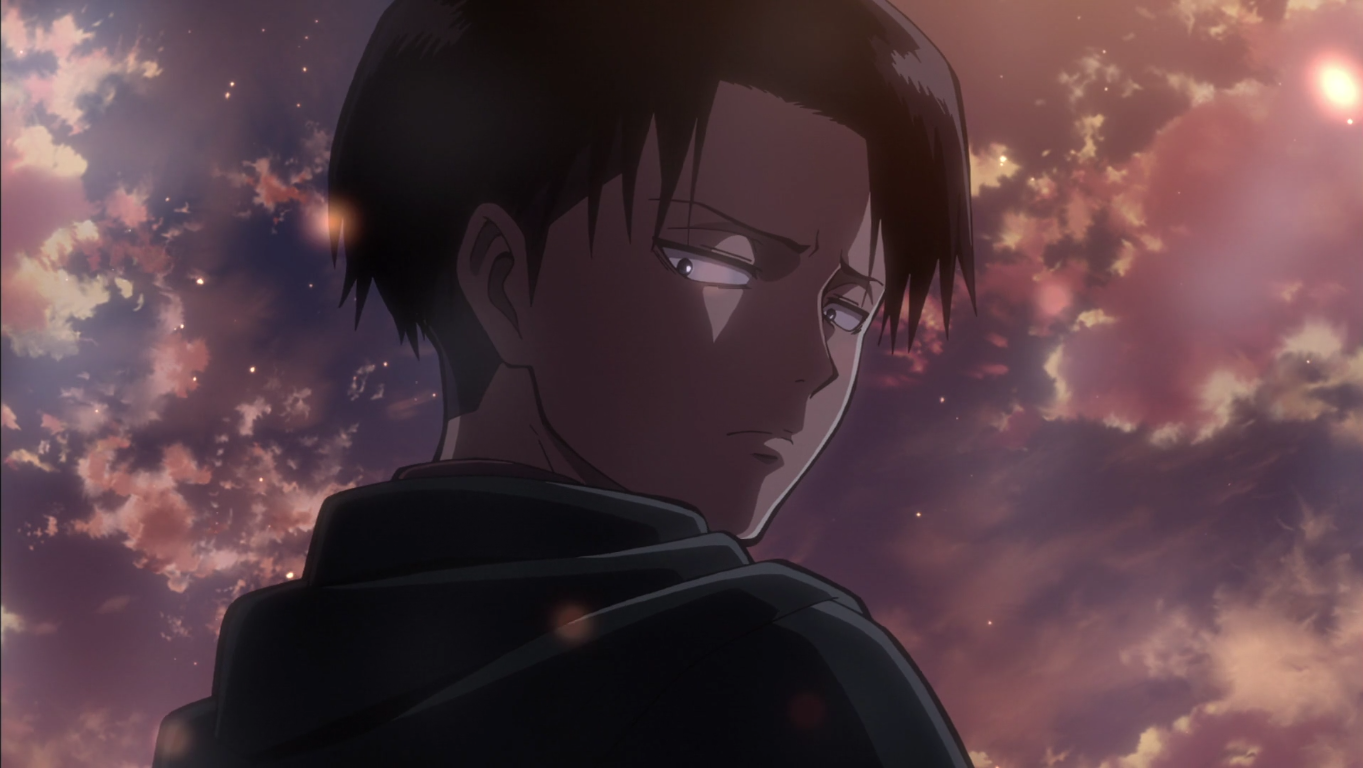 He’s the poster child of Attack on Titan, moreso even than the show’s protagonist, Eren Jaeger—the subject of almost uncountable fanart and videos. And while all this attention can cause some to pan Levi as a pretty face with no substance, even a cursory examination proves that’s not the case. True, Levi isn’t without the angst-riddled charms that so easily draw in the fangirls, but he’s far more than a calm, collected bad-boy; he’s a deeply complex and well-written character.

For example, Levi’s emotional isolation goes far deeper than your typical angsty bad-boy. Levi is not a lone wolf; he’s an outsider, in many more ways than one.

Every angst-riddled character must have some traumatic backstory, and in this regard, Levi is no exception.

Levi is the survivor of a horribly traumatic childhood. He was born the son of a prostitute, his mother choosing this lifestyle in a feeble attempt to earn money and escape the persecution that came with her family name.5 She died when Levi was just a child, leaving him utterly alone. The boy would have starved to death if not for his uncle Kenny, who finds the young Levi sitting in the dark by his mother’s decaying corpse, a sad sack of skin and bones with nothing to live for. 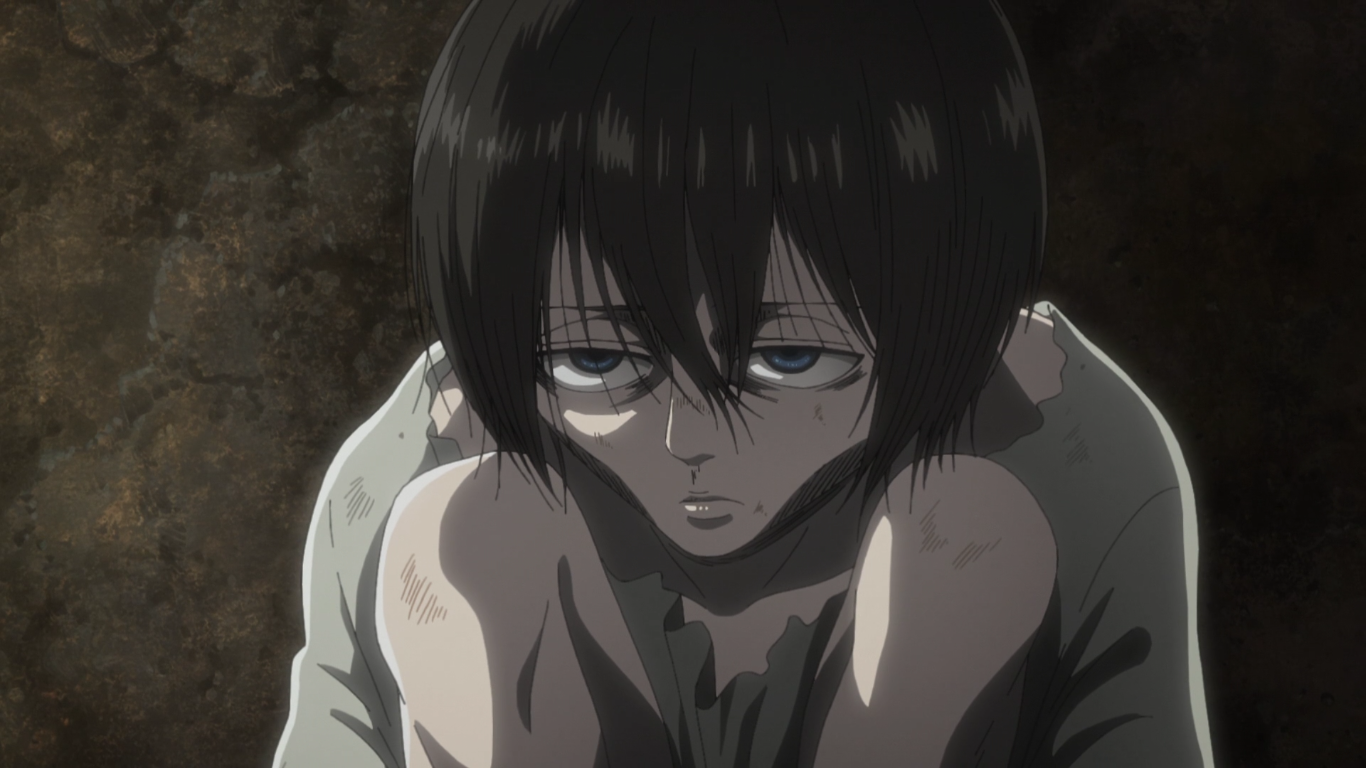 Kenny takes it upon himself to raise Levi, unable to watch his own flesh and blood starve, though he himself admits he was no father.6 Kenny is a serial killer, and he trains Levi in a similarly violent lifestyle to ensure the boy could survive in the brutal underground city they called home. But when Kenny deems Levi strong enough to get by on his own, he abandons the boy. Once again, Levi finds himself alone. 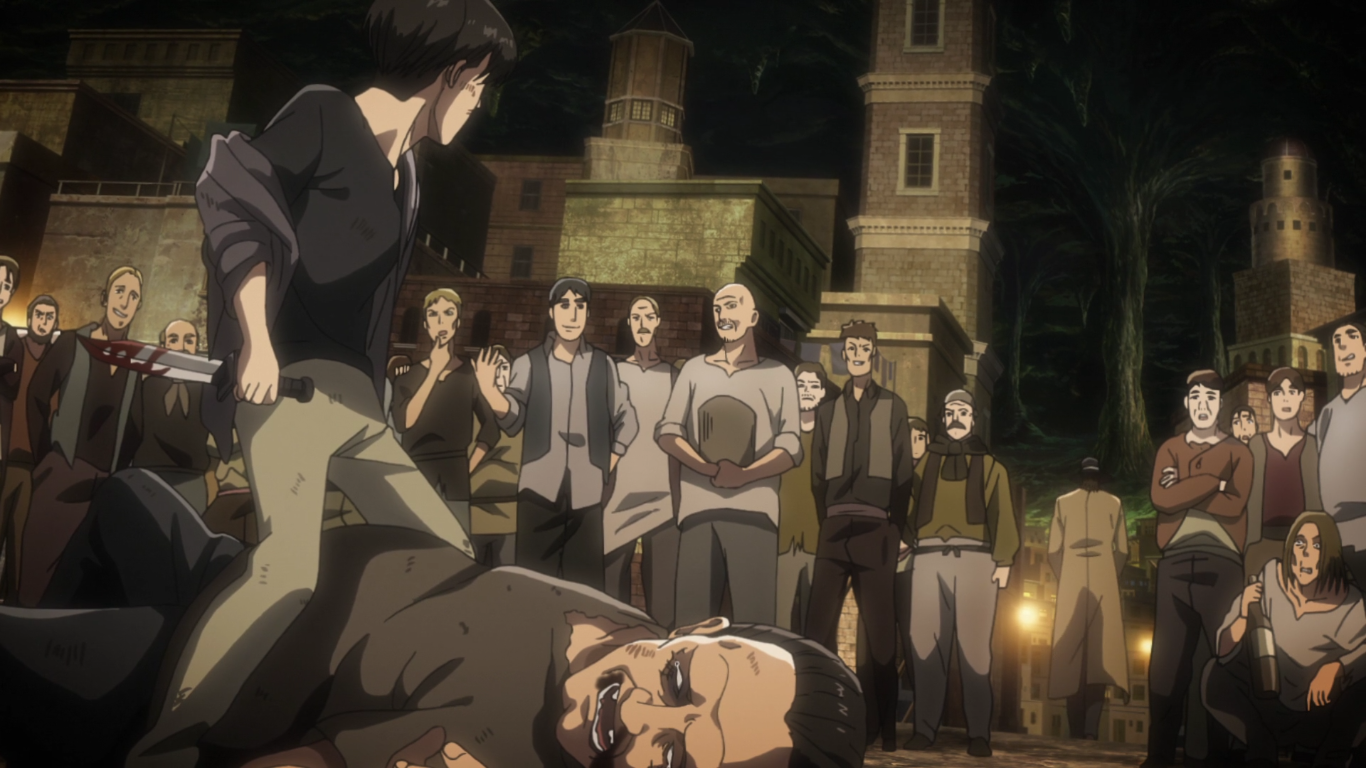 Forced to raise himself from that point forward and having already been abandoned twice, it’s little wonder Levi becomes independent to a fault. The viewer would expect him to become a lone wolf, a mysterious force determined to live on his own.

Love wolves seek solitude. They purposefully cut themselves off from communication with any others. But Levi has never wanted to be a loner. Even by the end of season three, he has only recently chosen a life of physical isolation due to repeated trauma—to protect himself… and anyone who gets too close to him.

Levi repeatedly loses anyone close to him, often to brutal, violent deaths. Over and over again, anyone Levi holds dear is torn away from him, often leaving him the sole survivor.

In parts one and two of the “A Choice with No Regrets” OVA’s, we learn part of Levi’s backstory, namely how he came to join the military and serve under Commander Erwin. While living in the filthy, crime-riddled undercity, Levi takes in two “strays” like him, cultivating their skills and watching their backs. For the first time in a while, he has a group of friends. A family, one could say. And together, they find a way to gain citizenship to the city above, where opportunities are plentiful and life is cushy: kill Commander Erwin.

However, they’re thwarted by Erwin himself, who’s no mere soldier but the leader of the death-defying Survey Corps and a madman among madmen. Still, this turns out to be a golden opportunity: Levi and his friends cut a deal with Erwin to drop the murder charges against them if they’ll join the Survey Corps. It’s the perfect chance to kill their target.

But the plan goes awry. Levi’s friends wind up dead, brutally killed by Titans on their first Survey Corps outing.

Despite Levi’s rage directed at Erwin, deep down, he doesn’t blame Erwin for the deaths of his comrades. Levi blames himself. 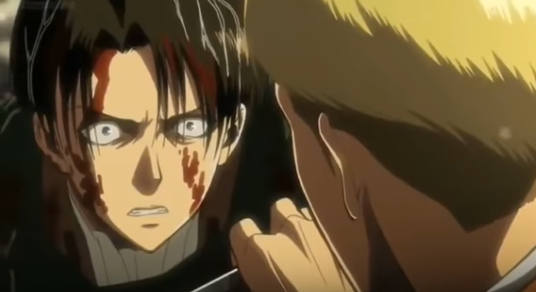 Once again, Levi is left with nothing, his only family stripped from him.

The pain is agonizing. But as Levi kneels in the ashes and blood of his past again, Erwin offers him new purpose. Levi becomes a killing machine in the Survey Corps: the unequivocal master of murdering Titans. Even civilians recognize him at a glance and know him by name as the Titan-slaying hero. 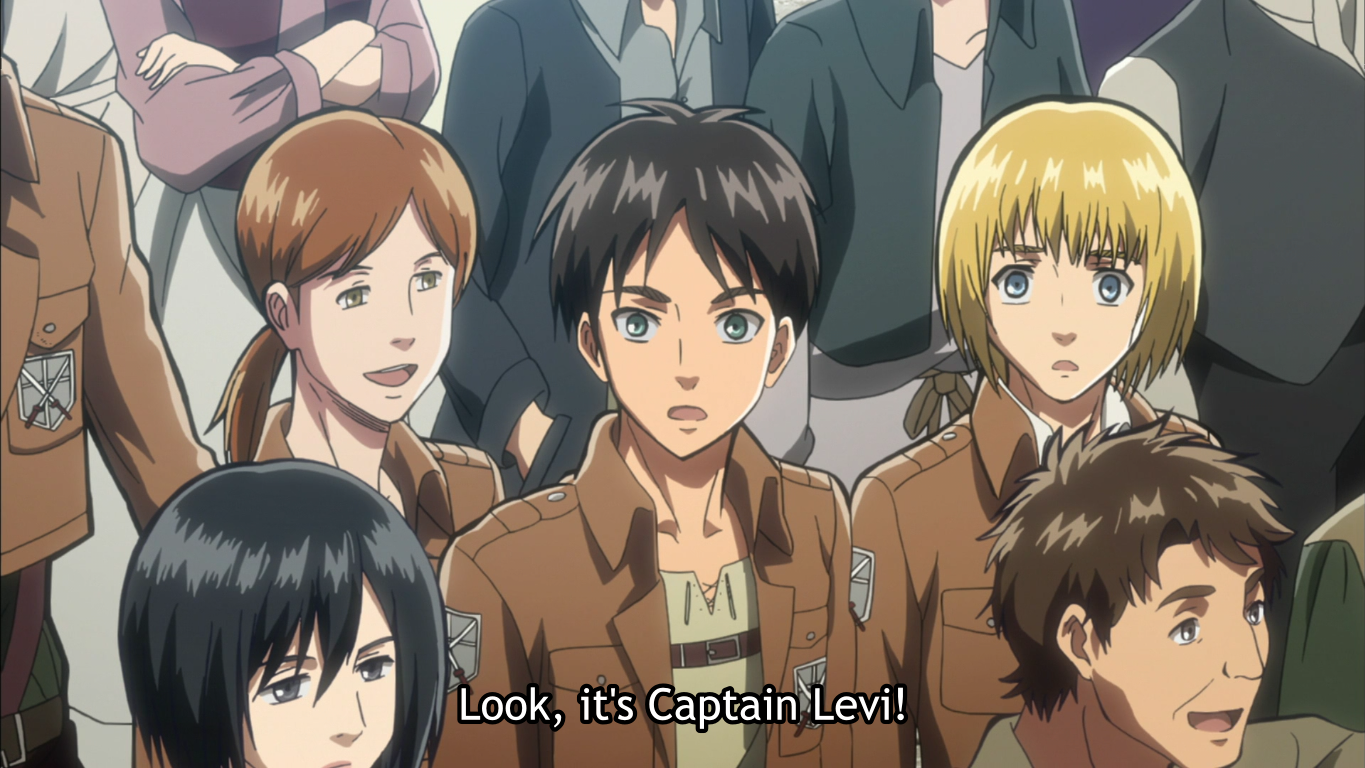 As the years pass, Levi gains a new crew, a squad he’s hand-picked: cautious, suspicious, deadly, and a bit eccentric, not unlike him.7, 8 They loyally follow him, trusting in his judgment, having forged bonds thicker than blood from their shared traumatic experiences fighting—and surviving—the Titans. 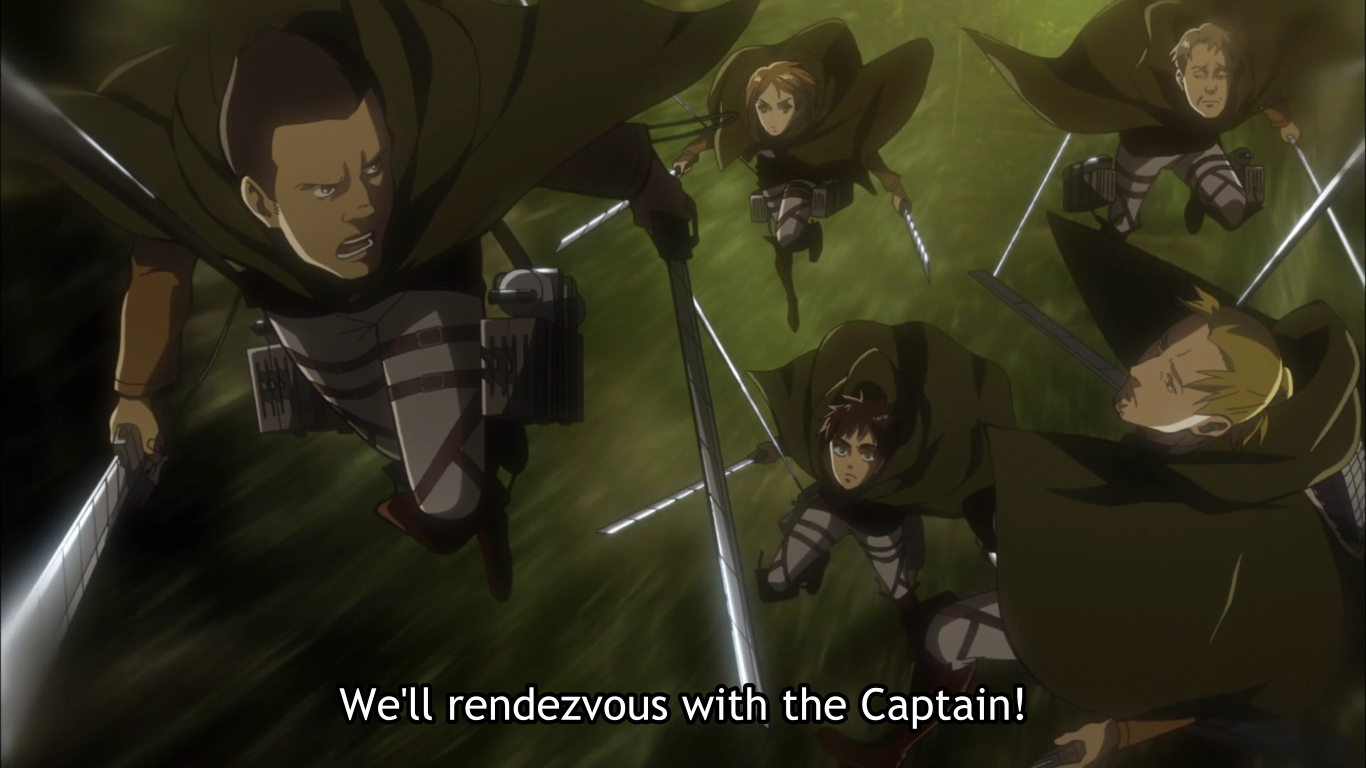 It’s still not enough. When encountering a sentient human-controlled Titan for the first time, Levi’s squad is exterminated—again leaving him its sole survivor. 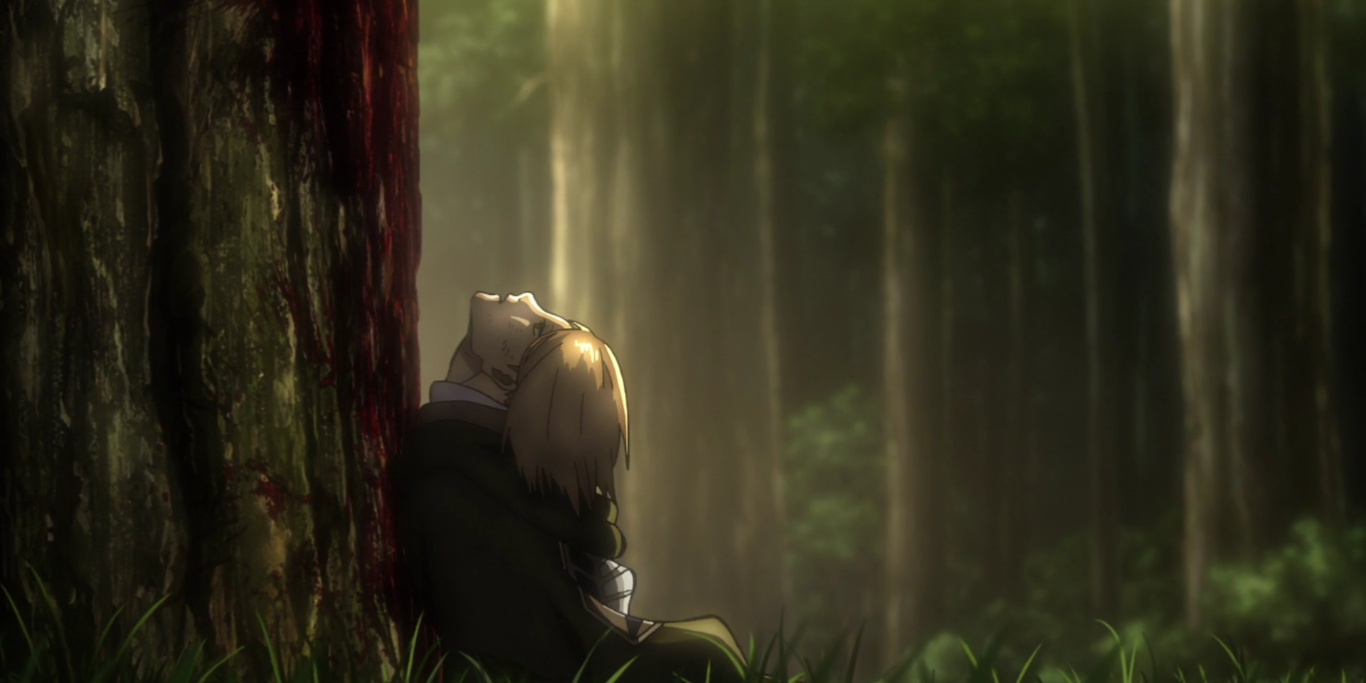 He’s beaten down. He’s exhausted. He’s devastated. Because for the third time in his life, he’s lost everyone he cared about. 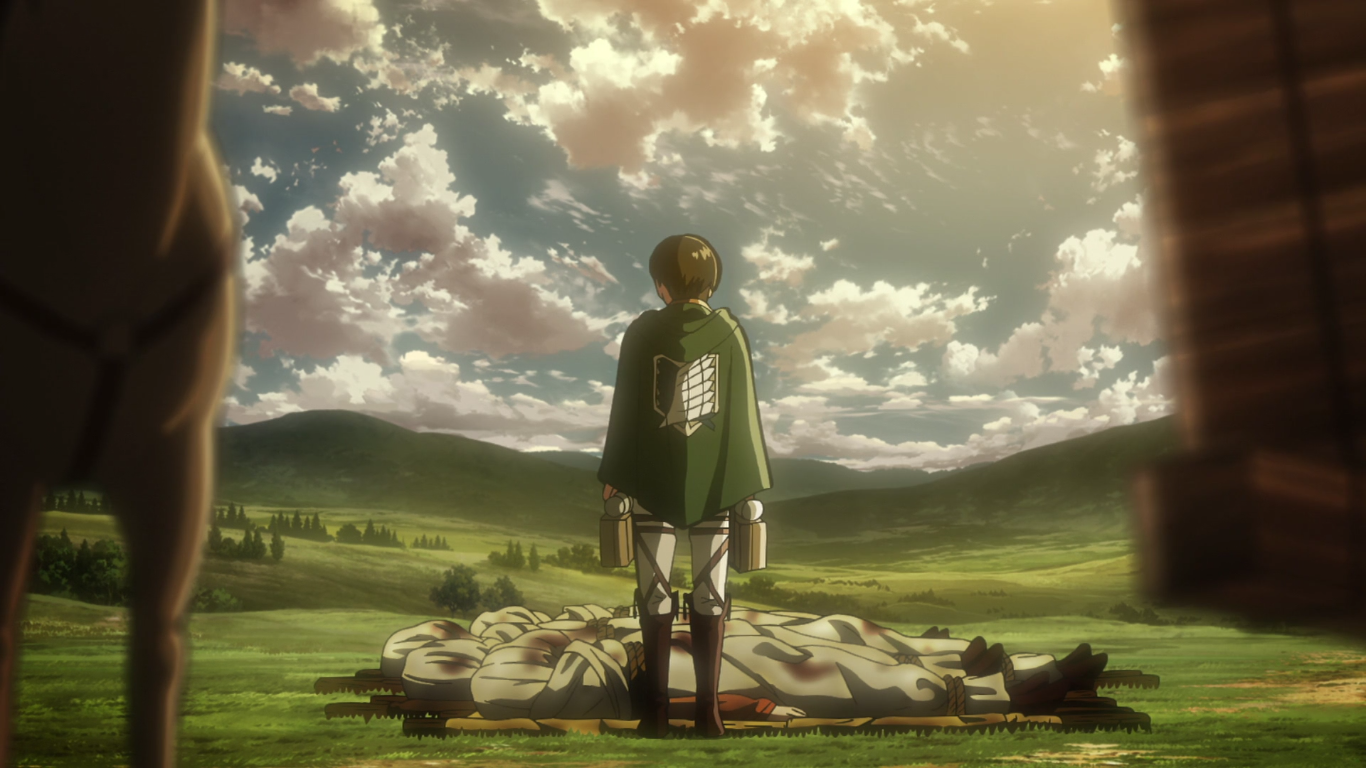 Not long later, Levi is given another squad, this one comprised of fresh recruits that include most of the protagonist, Eren’s, surviving friends. They’re young, but they’re hardly inexperienced: battle-hardened by their own near-death experiences with the Titans and, now, near-death experiences with the Military Police, who begin to hunt down the Survey Corps for alleged crimes against the crown.

Levi still trains his squad, guiding the young troops with precision and command. But it’s clear he’s even more distant from them than any group before.

With each new group Levi grows attached to, he begins to slip further and further away from them emotionally.

It began with Kenny, who he saw as his father; this loss resonated so strongly that Levi still felt confusion and resentment about Kenny’s inexplicable abandonment even as an adult. 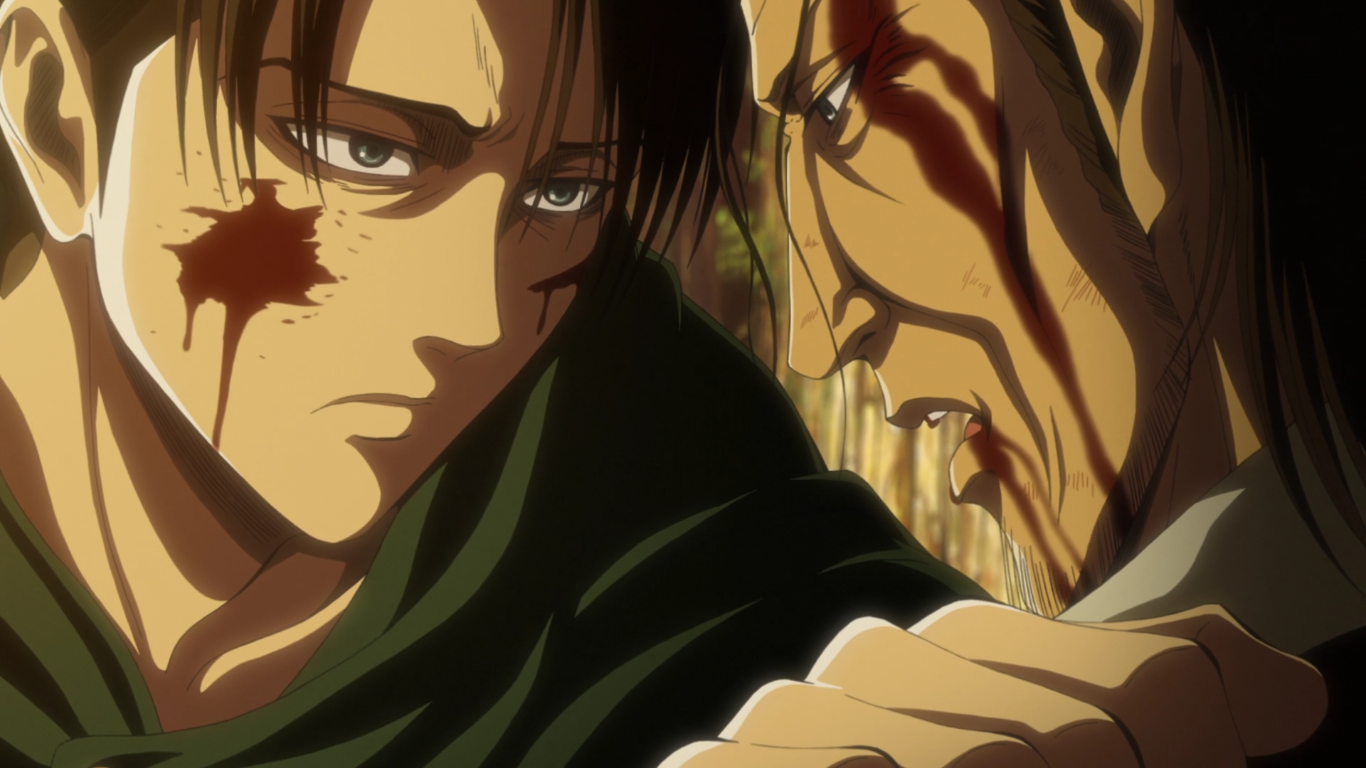 When he meets his friends in the underground, he’s a little more reserved. But they’re pals, and he’ll look out for them all the same. And then he gets them all killed.

So he gets a squad. And while some degree of professionalism is required due to being an officer, it’s clear Squad Levi (and the Survey Corps in general) don’t particularly abide by strict professional distance. Quite the contrary, the Survey Corps (and Squad Levi in particular) share a deep-seated comaraderie. But though Levi’s squad clearly adores him and would easily give their lives for him, their captain is a bit more distant, reserved. He barks orders, but he doesn’t spend much recreational time with them. He makes biting comments and commands, but he doesn’t have the same friendly bond with them as he did with his underground gang. He’s the squad’s officer, not their friend.

And then one squad dies, and a new one falls to him. And this time, Levi keeps his distance more than ever before. Rather than listen to the group squabble or chat, Levi physically removes himself from the squad in scenes outside of combat. Though he’ll intervene to scold the kids when they’re being too rambunctious, Levi typically remains out of view. He listens in on conversations… but he never joins in himself.

Like the night Eren and his best friends sit outside a tavern discussing their hopes and dreams the night before a vital mission. Levi listens in, hears it all… but never participates, remaining in his own isolated world. He remains outside the squad.

Or later, when so few of the Survey Corps troops return from that same doomed mission. As Levi’s squad discusses the sacrifices that were made—a conversation in which Levi himself is being accused of making poor decisions, a conversation Levi has every right to join in—still Levi remains in the background, hearing everything but not engaging with his troops. He doesn’t admonish them. He doesn’t agree with them. He doesn’t advise them. He just sits on the outside of the circle, alone. 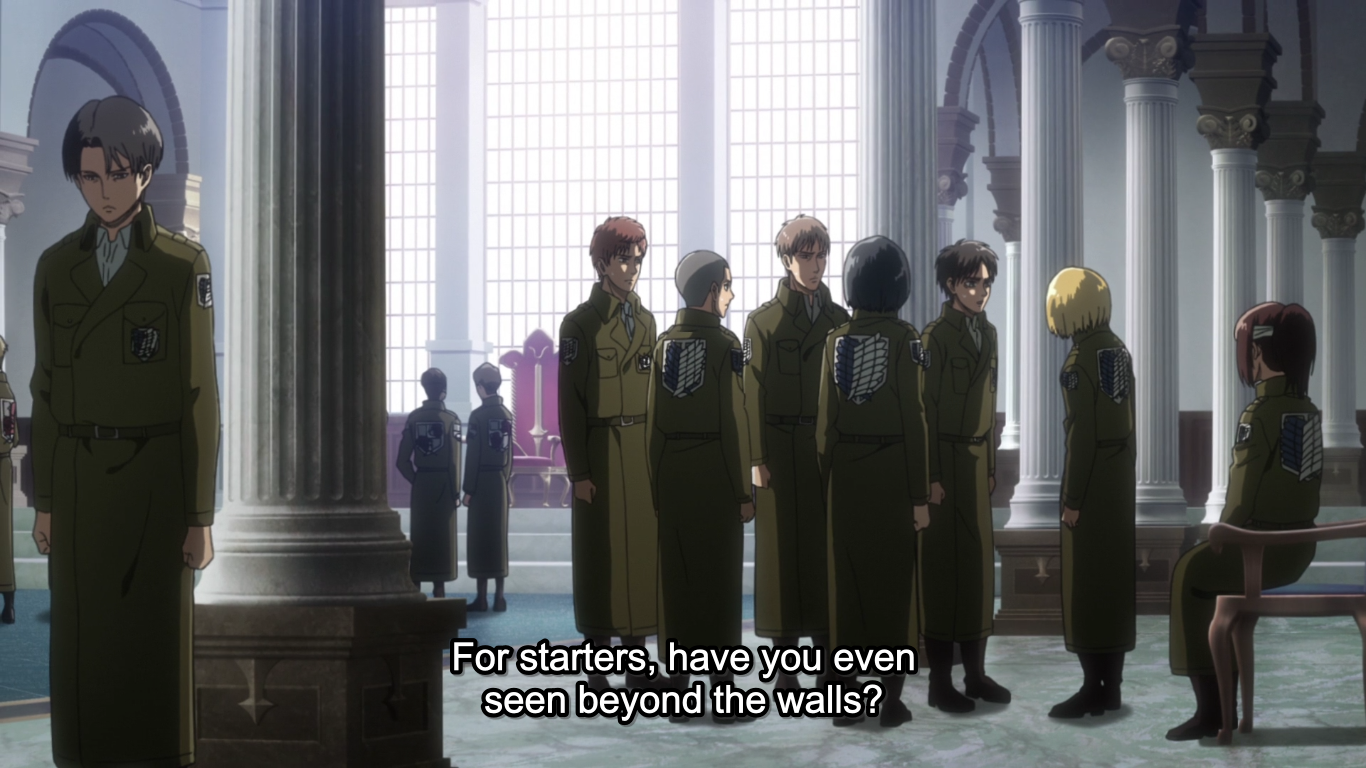 Levi has seen so much trauma that he can’t take it anymore; he can’t get too attached. He can’t stand losing more of his comrades again. Because anyone that gets too close to Levi gets killed.

I think this is one of the reasons Levi ended up pledging himself to Erwin’s forces and how they formed such a close bond despite their vastly different backgrounds and personalities. They both understand the pain of feeling responsible for the deaths of those close to them and under them, who trusted them.

The Outsider by Design

Erwin, despite seeming more socially open than Levi, is still a very private man and closes himself off in a less pronounced but similar way to Levi. Erwin very rarely discusses his true feelings, his insecurities, or his motivations to anyone—but when he does so, it’s most often with Levi.

Both of them have served as leaders, guiding others forward… and watching the people under their command get killed time and time again. And though both men excel at maintaining decorum and hiding their emotions under a stoic mask, they also both suffer from guilt at the horrific loss of life they’ve incurred.

The people they have lost weigh heavily on Levi and Erwin’s shoulders. But it is this very loss that allows them to connect with one another in an intimacy that few other characters in Attack on Titan share. It’s not Erwin’s second-in-command and Levi’s fellow captain, Hanji, who the men confide in. It’s not the experienced and wise Commander Pixis they seek guidance from. They turn to each other, knowing only they understand the guilt they feel.

These two men separate themselves from the rest not out of some angst-ridden desire to be alone, but out of guilt, shame, and trauma. They cannot bear the thought of dragging others down the path of death and destruction their lives—and the lives of anyone close to them—goes down. Yet circumstances demand they do so again and again.

The ones who sit in the shadows as their comrades talk, not wanting to take part… out of a desire to protect themselves from the pain of loss. 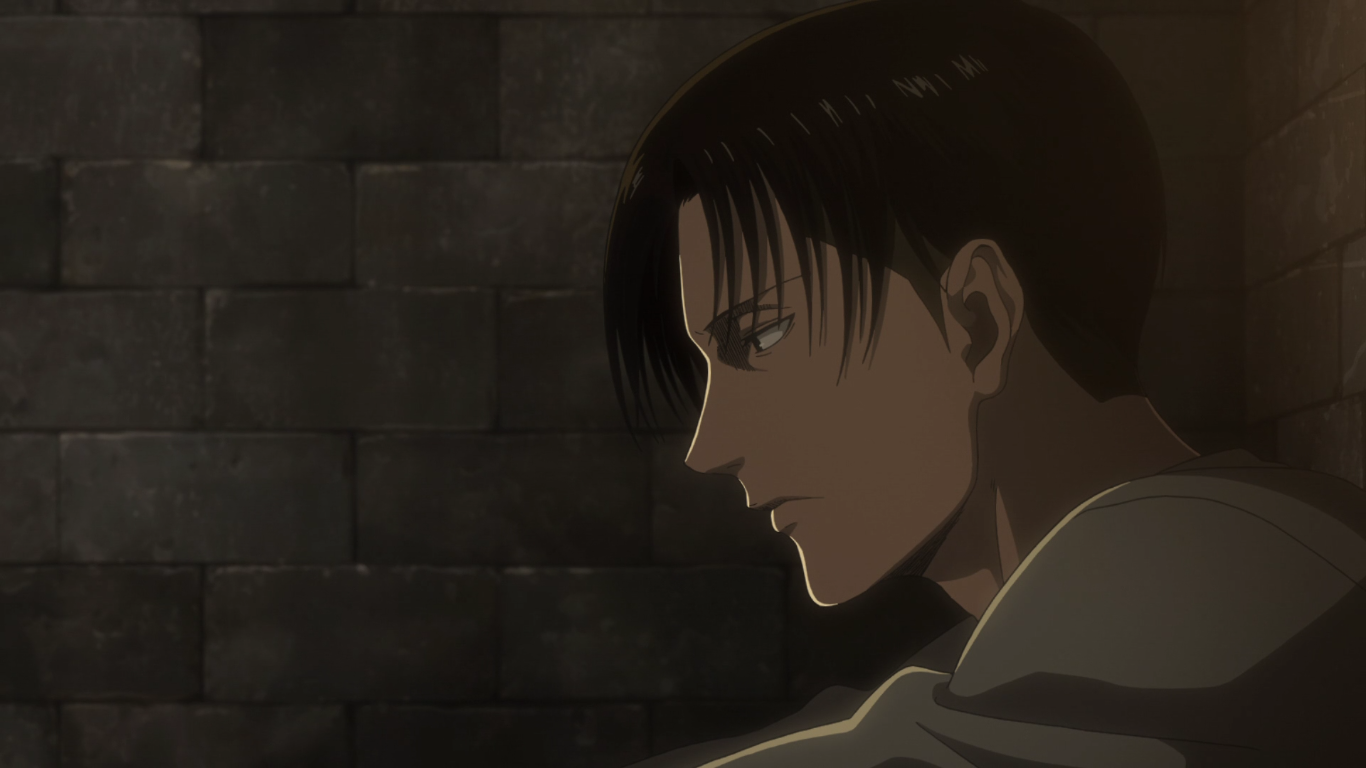 ---
As always, in the comments, please remember to be considerate of anime-only fans who haven’t read the manga. :) Spoilers will, unfortunately, need to be deleted!

---
Notes and References:
All photos property of their respective owners and used under US "Fair Use" laws. Unless otherwise specified, all are from VRV.co.

Attack on Titan and all related terms property of Funimation. And I am not affiliated with them.