Why I Love Anohana: The Flower We Saw That Day – And You Might Too


Aging is a strange thing.

Our current age is a snapshot of a fleeting moment in our lives. After all, the present is a tiny thing, only lasting for a single moment before it becomes the past. Memory, then, sifts through those snapshots, bringing a piece of the past back to our present.

My teenage years are long behind me, but I can still distinctly remember parts of them: like how frustrated I was all the time. How even the smallest thing felt monumental and overwhelming because it only added to the tremendous changes that were happening in my life: bigger emotions, greater hormones, and the profound issue of being trapped between childhood and adulthood, a member of neither group; an outcast in a time when identity—and belonging—are most necessary. Not realizing how heavily all this affected me, and not being equipped to express any of it due to my emotional immaturity.

Few media attempt to capture this sensation and speak to those currently undergoing it; they’re usually too busy trying to capture a teen’s obsession with sex. But teenagers are so much more than that. They deserve more. Need more.

They need stories written by people who distinctly remember what it was like to be in that confusing time of life. They need captains who can guide them through turbulent waters, to equip them with tools and wisdom that they can use to chart their own voyages through life.

And, I’d argue, it’s not just the teenagers who could use some of those charts.

Anohana: The Flower We Saw That Day may not be a life lesson map, and in its attempts to convey its message, it does stumble a bit here and there. But those few missteps do nothing to diminish its core: a work of art that addresses issues few media care to tread, in a delicate and lovely way that speaks to some of the most emotionally vulnerable in society.

Anohana follows former friends who are now anything but. After losing their dear friend Menma in a tragic accident ten years ago, five highschoolers find themselves frozen in life. Look no further than the protagonist, Jinta: a shut-in who’s all but given up on school or his future. 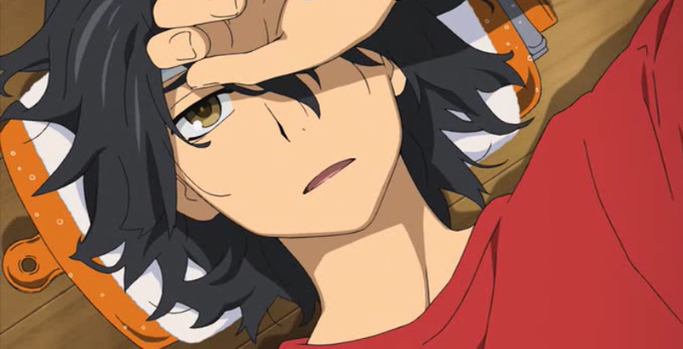 But when a vision of Menma appears to Jinta asking him to grant her wish, Jinta is forced to reunite the old gang to bid a final farewell to Menma. 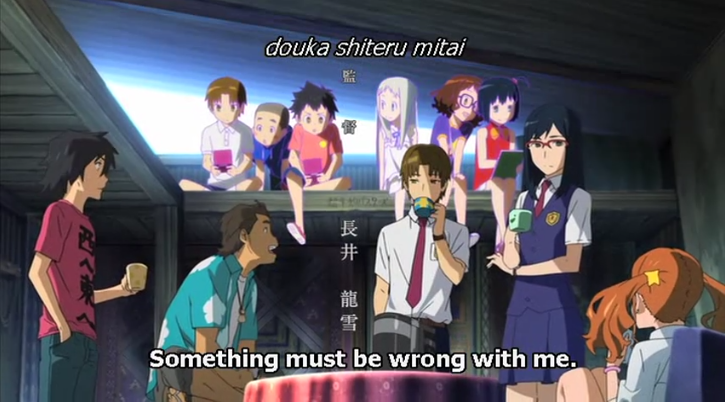 I love Anohana: The Flower We Saw That Day. And if you like coming-of-age stories, tales of friendship, life lessons, and characters who undergo emotional growth, you might too. 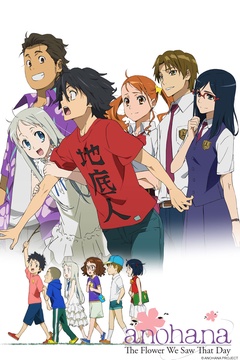 Though the majority of Anohana’s visuals don’t particularly stand out, its best visuals bookend each episode. Anohana’s opening and closing are nice to look at; but more importantly, they convey a great deal of information about the characters and the tone of the show.

I often skip openings and closings to quickly get to the meat of each episode. Most anime openings are superficial anyway, containing empty flashy visuals. By contrast, the storytelling of Anohana begins at the very start of its opening and only ends on the last note of the closing song. The opening and closing songs (“Aoi Shiori” by Galileo Galilei and the “10 Years After” version of “Secret Base ~Kimi ga Kureta Mono~”) perfectly set up the melancholic but wistful, hopeful, and nostalgic tone of the show. And to the tune of the atmospheric music, the visuals teach us important aspects about the characters.

We learn from the first ten seconds of the opening that this group of six friends was reduced to five, and that the insufferably intelligent Yukiatsu took the loss the hardest, still spending much of his time thinking about Menma. 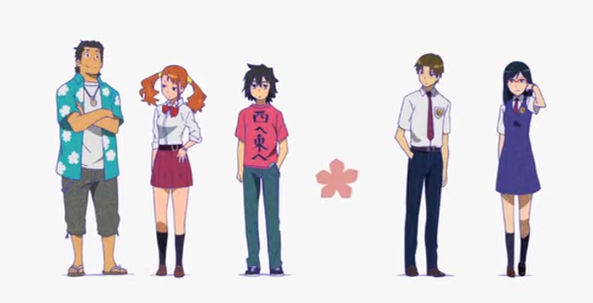 We learn that Poppo is one of the most spiritually-attuned of the group and that he is most willing to accept the existence of things beyond. 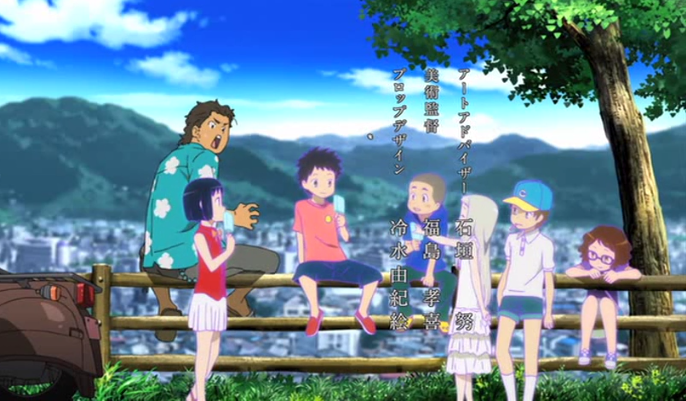 And that Anjo, despite having found new friends, still misses her old ones—while feeling trapped by her situation and her shame. 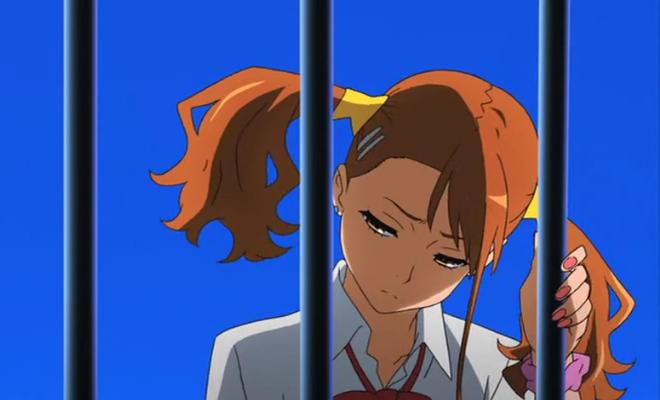 We learn that Tsuruko has been attempting to remain close to Yukiatsu this whole time.

And we learn that, contrary to Jinta’s standoffish and lone-wolf persona, his former friends still linger in the back of his mind. He still misses those days when he was a leader, a part of a community. 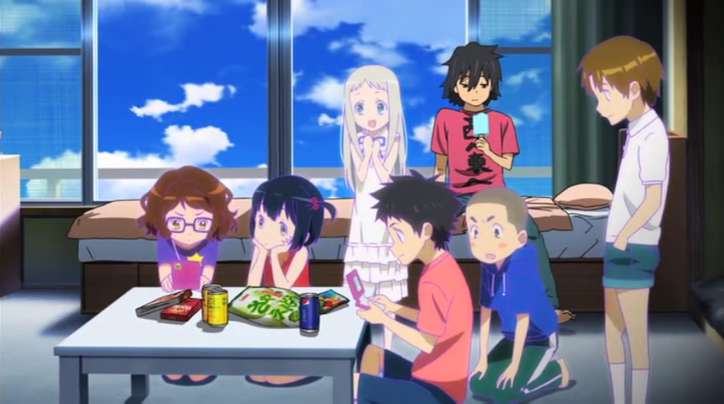 This permeative storytelling continues through Anohana’s closing, which similarly blends the music and visuals to show how the girls yearn to be close to one another as they once were. 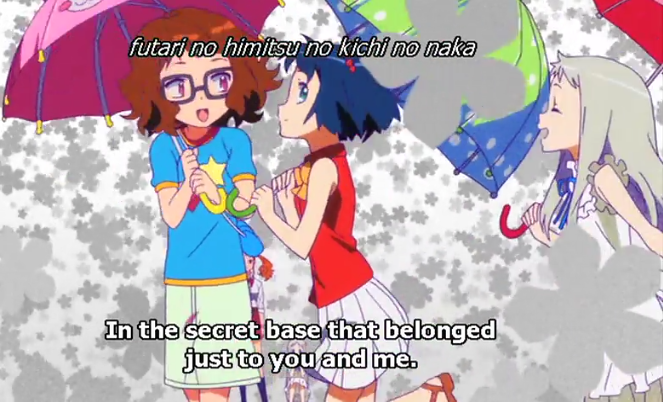 None of this visual storytelling would be possible without good character design, however. Fortunately, Anohana knew this and made sure each of the friends looked and felt unique, from Jinta’s shaggy black hair, which he hides beneath a beanie and glasses outside the house to cope with his crippling social anxiety. 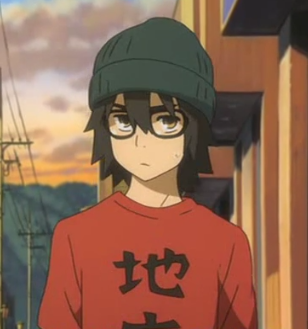 Or Anjo’s bright orange pigtails and trendy outfits, which simultaneously express her childlike innocence and her struggle to learn what it means to be a woman. 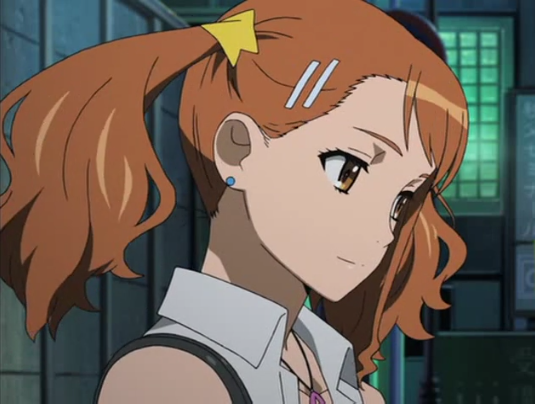 Then there’s Poppo’s towering, sturdy figure to reflect his enduring friendship and amicability.

Or Tsuruko and Yukiatsu’s more conservative designs, which speak to their collected outward appearance but belies their crippling inner turmoil. 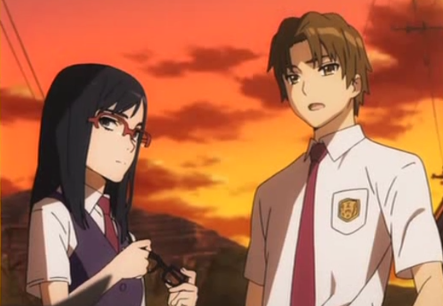 Anohana was equally careful in designing the characters as children. The story frequently revisits a scene ten years in the past, and there’s enough difference between designs to make the looks feel believable but enough similarities to know who’s who at a glance.

(It doesn’t hurt that their designs as children are adorable.)

Look at all those squishy faces!

Still, nice character designs are nothing but pretty pictures without substantial character to bring them to life. While I didn’t connect on the same level to the entire cast, I understood each person’s motivation and actions by the end of the story. Many of the characters were particularly complex and realistic, and I found one in particular, the spunky but introspective Anjo, almost alarmingly relatable to me. 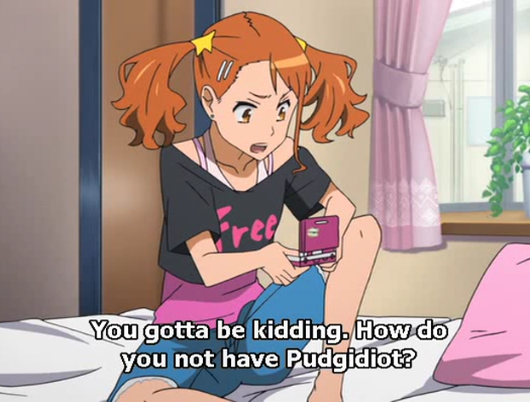 (It has nothing to do with the fact she’s a total nerd, I swear.)

Most of the characters are absolute delights, so while you may not like them all, there will definitely be at least one or two to latch onto that will make watching the others at least interesting if not enjoyable in their own right.

It’s just a shame that some of these characters don’t get enough time to develop.

Overall, the show paces itself well. Anohana takes its time introducing each of the main group of characters, allowing us to get a feel for who each one is without overwhelming us. They do this while never straying too far from developing the main two characters. However, the show’s pacing isn’t quite perfect.

For instance, development of some characters leaves a bit to be desired: certain characters get exponentially more characterization and development than others. The reserved Tsuruko and the exuberant Poppo suffer most from this, only revealing their true feelings and insecurities near the end of the show. The “hints” at their inner lives are small, short, and almost imperceptible compared to the attention that’s given to Yukiatsu, Anjo, and Jinta. This is unfortunate, because while Tsuruko and Poppo have just as much complexity as any other character, they’re only given their moment to shine when it’s already too late.

A brief arc also suffers from less-than-ideal pacing, running the risk of frustrating the audience. However, this arc isn’t without its merits, as it could have added a much-welcome layer of mystery with just a few tweaks to the visual presentation and directing. (Though more on that next week.)

It was a delight to step into this anime with few expectations and see the mystery and deeper themes slowly unpack themselves. Though on the surface Anohana appears to be a typical slice-of-life anime, it’s anything but. In reality, Anohana is a poignant story about loss: how to cope with it and how to overcome the guilt that so often comes attached. 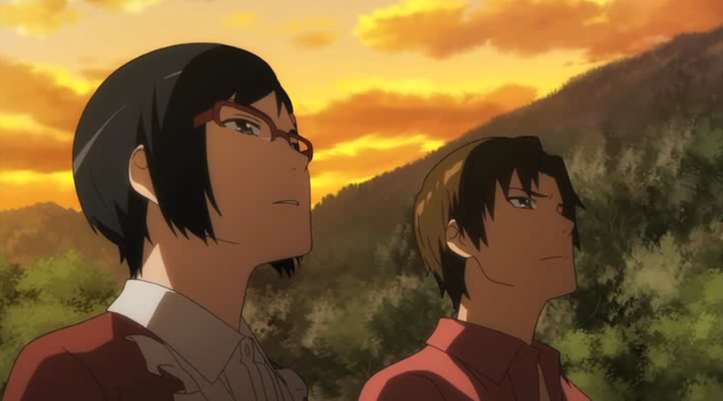 Each of the main cast of characters experiences arrested development: ten years older but having barely moved forward, still trapped as five-year-old children.1 Most adults struggle to handle their emotions properly, let alone teenagers who are still learning so much about life. And, as if it well remembers this struggle, Anohana portrays and speaks to this age group so delicately, so expertly. Miraculously failing to fall to the cliché, Anohana captures the trapped, confused, and vulnerable teenage years. As it peels back each character’s facade to reveal their underlying guilt and insecurities, Anohana also holds out hope that they don’t have to remain this way. 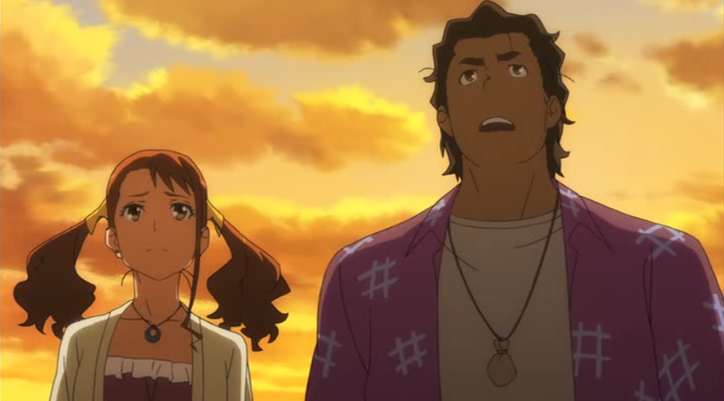 It’s a story I know I needed to hear, and I’m so glad I found it in the flower we saw that day.

---
If you’d like to enjoy the story yourself, you can watch Anohana for free on VRV.co or Crunchyroll.com.

All photos property of their respective owners and used under US "Fair Use" laws. Unless otherwise specified, all are from VRV.co.

Anohana: The Flower We Saw That Day and all related names and terms are the property of Aniplex of America..