Discussion: Fan-made vs. Official - A Double-Standard?


Guess who got internet back? :D You guys ready for a juicy discussion?

Okay, so I’m a huge fan of Star Wars. Which means it’s been heartbreaking to see the fanbase splinter over the past few years. Love Disney’s Star Wars content or hate it, I think the acquisition is one reason so many fans are rabid for “good” Star Wars content: something that lacks controversy. Something that everyone can agree they enjoy.

Ironically, this precarious situation for Disney is a great place for fan-made Star Wars content to thrive.

One particularly big event for Star Wars fans occurred the day popular YouTuber Star Wars Theory released his highly-anticipated (and highly ambitious) Darth Vader fan film. Judging from the 11.4 million views and the 640,000 likes the video has earned as of this article’s publishing date,1 I’d say it was pretty well-received. 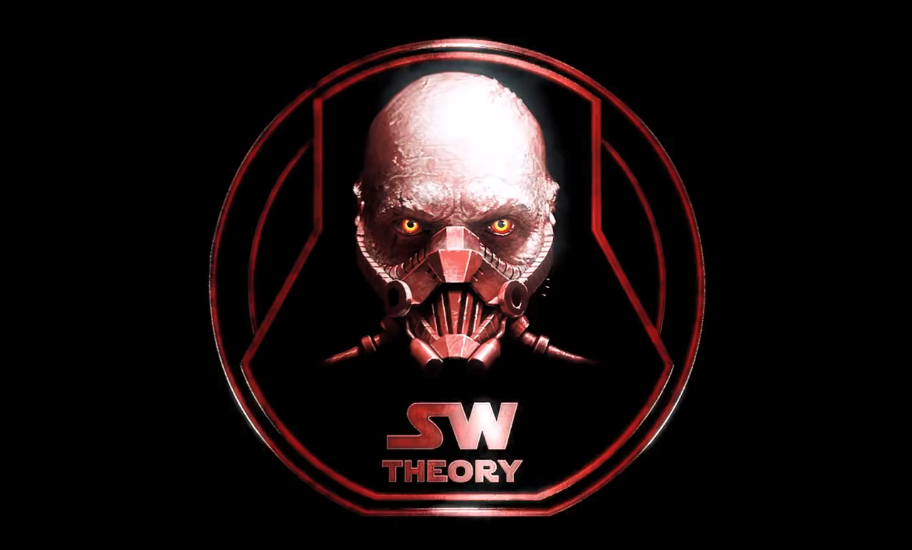 I was among those viewers who enjoyed the experience, but as I watched the fan film, my mind couldn’t help but wander to the current Star Wars situation and controversy. I could already hear fans typing in the comments how this fan film was far better than anything Disney had produced in the Star Wars universe.

Turns out, I wasn’t far off the mark. Though there were a few voices of dissent (8,600 dislikes,2 making for a paltry 1.3% disapproval rating, and one comment that the fan film was “a video game cutscene at best”3), a vast majority of comments gushed over the fan film... 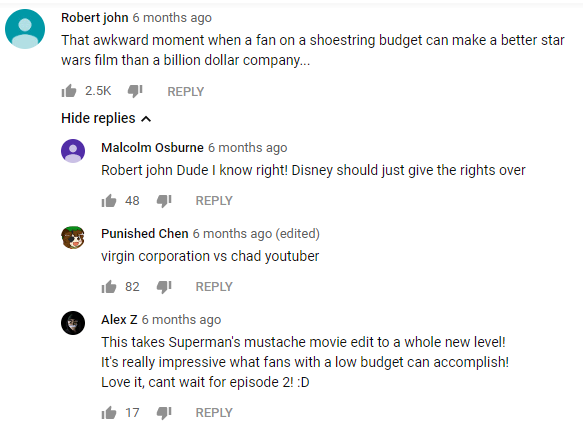 Those comments made me wonder... is the fan film really that good?

Don’t get me wrong; it does contain some fantastic acting, but it’s clear it’s made on a small budget. Which, of course, it had to be. But the fact remains, the film can’t compete with a major studio’s massive budget. For instance, the special effects. While passable for a Star Wars fan film, they’re clearly not up to par with a multi-billion dollar studio. Were Disney to create a film with this same level of special effects, they’d be a laughingstock (or at least, moreso than they are already to a number of fans).

Still, I doubt this fan film garnered as much criticism as its “canonical” counterparts. As shown before, a vast majority of the comments on the fan film were positive. Compare this to the controversy swarming Disney’s Star Wars films, especially The Last Jedi, and I had to wonder if the praise for the fan film was completely fair.

Positivity toward fan-made projects is a trend not just in the Star Wars fandom but many other communities as well. Fan-made projects simply tend to get less criticism than official ones. And it makes sense to lavish praise on something that’s a labor of love versus an official film which is, by design, made to bring in money.

And of course, the trend of overwhelmingly positive reception toward a fan-made project can be explained in part by a couple facts: 1) fan-made projects are geared toward people who are already fans of, and thus biased in favor of, that content. Official projects, by contrast, must attempt to bring new people into the fandom in order to thrive financially. And 2) there are fewer people watching fan-made content than the official stuff. Due to that far smaller audience, any critics against it will be fewer in number than the amount of reviewers checking out official content. This means there will be overall fewer poor reviews, even if the ratio of bad to good reviews may be higher for a film with a smaller audience.

However, even when we take these two elements out of the equation, there still seems to be natural bias in favor of fan-projects. Again, look no further than the overwhelming number of positive comments on Star Wars Theory’s fan film.

But do you think this is truly fair, or could this be fan bias getting in the way of objectively reviewing content?

Of course, my first instinct was to say: “Well, is it really fair to compare a fan-made project with limited funding to a multi-million dollar budget?” Because of course the fan project is going to be less polished with that much less money.

However, at the same time, if a fan project can deliver an experience that fans want more than something made with millions of dollars... maybe there are points we can compare, after all.

I think whether it’s fair to compare the two depends on which aspects you’re comparing.

I’d argue that for something such as special effects (where the budget does play a huge part in quality), it’s fair to separate fan projects into a different category than official ones for the sake of critique. There’s really no point to comparing apples to oranges. After all, how ridiculous would it be to compare a child’s crayon drawing to the Mona Lisa? They’re two projects created on vastly different levels and, I’d argue, must be critiqued as such.

But I think there are other elements of a film that don’t necessarily require a vast budget to produce, such as the writing and even perhaps the directing. I think we can—and possibly should—compare these elements on the same level. A fan-made project has just as good a chance at creating a memorable, well-written character as a big-budget studio, and both creators should be held to the high standards media has set. By the same token, if a fan film can’t even get the appropriate atmosphere or characterizations correct for that universe, it has every right to be criticized severely.

Interestingly, Luke Stephens, a video game reviewer on YouTube, discussed this very situation in a video detailing his initial impressions of the game Days Gone:


I’d prefer it too if we could just look at Days Gone as a standalone title, irrespective of other studios’ work. But I don’t think that’s entirely fair to do. Specifically, if we look at what Sony Santa Monica did with God of War or what Rockstar did with Red Dead Redemption 2... it seems to me highly naive to look at these in a vacuum. The reality is that these games have set trends and standards, and that’s a good thing. The fact that Red Dead’s world feels so alive is good because it means that’s what players will expect... This is how we make progress and how the industry moves forward.4

Stephens continues, pointing out that it’s equally important to, at least to some degree, judge a product based on the “tier” at which it presents itself: “If Days Gone were being sold for $50, I wouldn’t be making a lot of these complaints—or at least not as energetically,” he says. “But the fact stands that it isn’t. It’s being sold to players as a main-line triple-A title; and in that regard, it simply falls short.”5

While Stephens is referring specifically to the game industry, he and I both agree that this same principle pertains to the film industry, as well.


You can go see a short film that was filmed by college students, and it can be really impressive for the budget and the experience level of the participants. But if there are major issues with the editing, acting, or writing, it doesn’t do anyone any good to ignore them just because you want to be able to be nice to the inexperienced party.6

Stephens hits the nail on the head for me. I think there are certain elements of filmmaking that are fine to compare on a different level depending on whether we’re discussing a fan-made production or an official one. However, I believe we all need to give a fair assessment to those aspects the fan projects can deliver on, evaluating them with just as critical an eye to ensure we’re encouraging art to meet and exceed standards of excellence.

But what do you think about all this? Is there fan bias toward fan-created projects? And, if so, is that a bad thing? Does it hurt the product, the IP, and/or the fandom? I’m dying to hear your take in the comments below.

(And, interestingly--unrelated full disclosure to those who care about reviews of Days Gone--Stephens did go on to make a far more favorable follow-up video upon completing the game. In case you were curious.)

---
Notes and References:
All photos are used under US “Fair Use” laws. Star Wars and all related names and terms property of LucasFilm and Walt Disney Studios. And I am neither endorsed nor affiliated with them.