Since realizing how important it is to me to provide constructive criticism with my less-than-positive reviews, I also realized how difficult it can be to offer ways to improve the writing of a film.

Nando takes the time to analyze the good, the bad, and the ugly about films--mostly superhero films, actually. While acknowledging a film's strengths, Nando walks through films step by step showing how one or two small changes they'd implement can change the whole story--or how he'd rewrite the whole film to tighten action, strengthen character arcs, and more.

Nando uses his exceptional grasp of pacing and film storytelling to construct rewrites of decent to abysmal films. Heck, I'd pay a premium ticket price to see his rewrite of the Justice League movie!

He does one-shot videos or, sometimes, entire multi-part series to totally revamp a film (as was the case with his Man of Steel rewrite). While I was one of the few people who enjoyed that film, Nando's rewrite was so tightly-written that waiting for each new part to release was as harsh as the most cruel of cliffhangers.

If you're into superhero stories, you have to give Nando a watch.


Buuuut if you're not really feeling like checking out something new, why not read something old and familiar? And since we're talking about superheroes, and superheroes are all about action, maybe you'll enjoy this snippet of a fight scene from The Victor's Blade, Book 1: "The Duel," in which my personal favorite snark-master, Zaelor, finds himself fighting a rather slippery opponent in a dark forest.
Posted by Jeannette Jonic at 8:00 AM No comments:

After getting some feedback from my readers, I've been tweaking things in Book 1 of The Victor's Blade. This here scene, which I'd posted an old version a while back, is just one of them. Which version do you like better?

Jaranin's storytelling skills are put to work during the summer festival as he tells a tale of a brave soldier and his dragon-slaying lover. The audience is mesmerized; things are going great... until Jaranin notices a certain someone in the crowd. 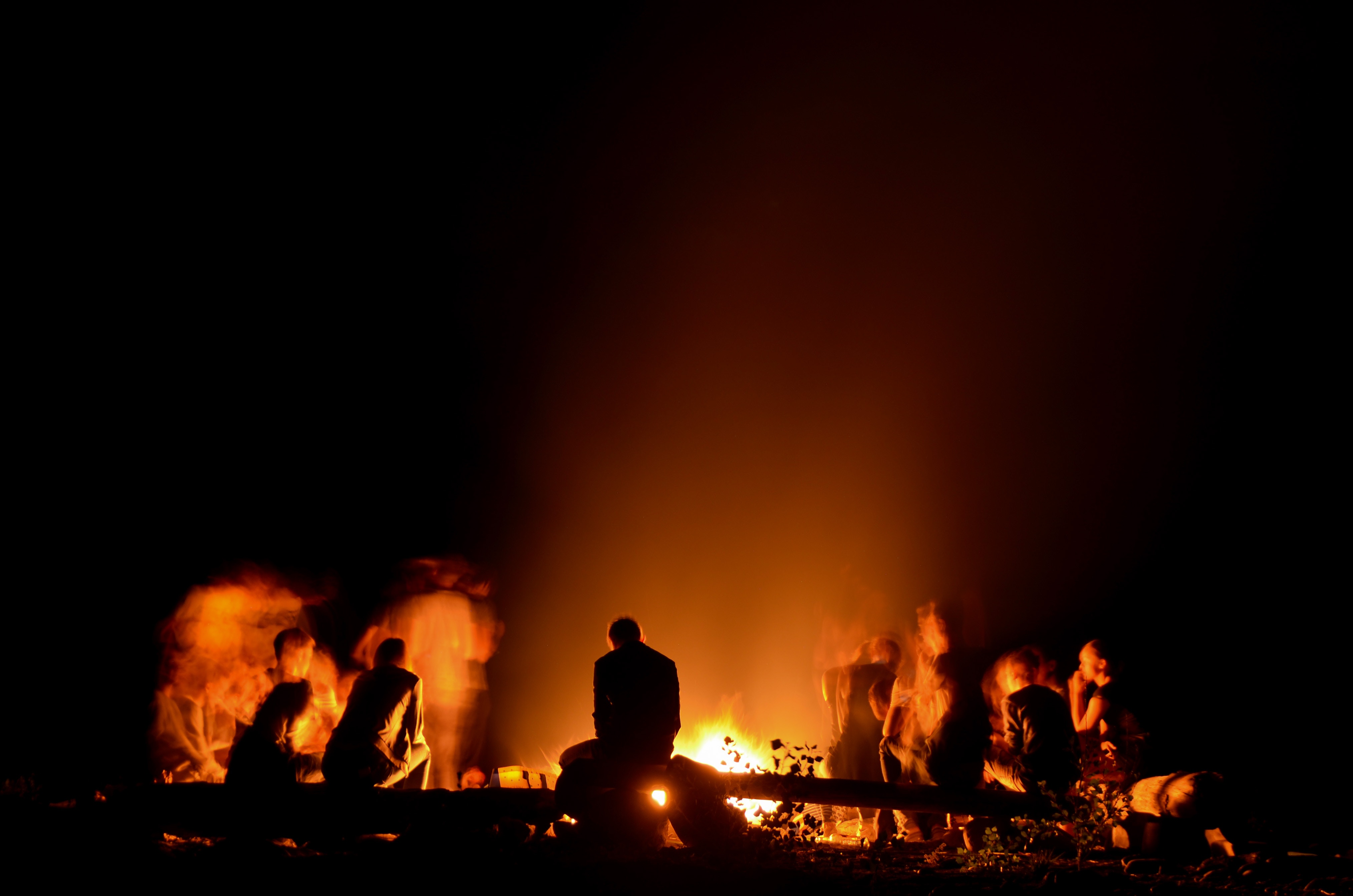 Photo by Joris Voeten on Unsplash

Jaranin swept his arm across the audience, letting his gaze pan across them again. Their gazes all followed.

“And there, glaring up at the beast with a warrior’s grin, though trapped between the dragon’s paws—”

He’d finally noticed Isalaina. There was something about the lighting… the glow of the fire playing in her hair, sparking in her eyes. She leaned forward on the edge of her seat, soaking in his every word.

Move, silly! he scolded himself. You just saw her ten minutes ago! That didn’t seem to matter much to his muted tongue or clouded mind.

Jaranin scrambled to find his place and nearly tripped over the hem of his robe. With a start and stammer, Jaranin extricated his robe and continued. “…Tr-trapped beneath the dragon’s paws was his one true love,” Jaranin swallowed, still unable to take his eyes off Isalaina, “The Dragon-Slayer. Alive and well.”

His whole face felt red-hot. “Together they felled the beast,” Jaranin continued, “he from the back and she from the front. And as she turned to him and smiled… he swore that she had never looked more beautiful.”

As soon as Jaranin had finished with a flourish and a bow, the spectators erupted into applause. Jaranin dismounted from the stage, nearly tripping again along the way.

Where are you? He wanted to plead as he gazed across the crowd. Where are you, where are you? Tiptoeing to glance over heads, he scanned faces, searching desperately.

And then he saw them: Isalaina and Elun, chatting together. As soon as she noticed Jaranin's gaze on them, Isalaina waved.

“Boy, wus that somethin’!” Elun chortled as he slid down the bench, making a place for Jaranin beside Isalaina.

Jaranin gratefully plopped into the newly-vacated spot between his friends.

Isalaina’s face was flushed. “You were exceptional.”

“And Isalaina, didn’t ya say his entrance was superb?” Elun chortled. “Didn’t ya say that? Go on, tell ‘im. Oi won’t mind if ya say et again, Is.” He elbowed Jaranin’s ribcage, grinning.

“All right, all right! Nothing caused us bodily injury,” Jaranin admitted as he ruffled Elun’s hair.

“This time,” Isalaina added with a giggle.

As if that were his cue, Elun abruptly hopped to his feet. “Well, Oi dunno about you two, but all that entrance-work has left me weak as a salmon in a sandpit.” He clapped his hands and rubbed them together. “So if ya need me, Oi’ll be showin’ Will Junior how to talk with yer mouth chock-full o’ leftovers and not chokin’.” He scampered toward the feast-tables.

“Be sure he knows about the ‘not choking’ part!” Isalaina called after him.

“He’s an odd one…” Jaranin chuckled.

“Well, no wonder we’re friends.” Isalaina countered with a smile. “Birds of a feather.”

“True…” Jaranin self-consciously cleared his throat. “You know, I think my performance would have been much better if I hadn’t nearly tripped over my robe…”

To her credit, Isalaina said nothing; but she did giggle.

“You were right,” Jaranin added soberly. “I should’ve let you hem it.”

She dismissed the comment with a wave of her hand. “I hardly noticed. I was too busy crying at that point. That story was beautiful; I loved it.”

He felt his face grow warm. “Thank you,” Jaranin replied, nearly cringing as his voice cracked.

Isalaina didn’t seem to notice, however, and silence fell. Fidgeting in his seat, Jaranin struggled to think of something to say. “So… I heard you won the archery contest for the third year in a row. Congratulations!”

“Oh, thank you!” She giggled nervously, and if he didn’t know better, he’d have said she seemed embarrassed. But before he had the chance to comment or tease her about it, Isalaina quickly added, “Although I’ve noticed I do much better when you’re busy gathering supplies for your entrance instead of fidgeting nervously behind me…”

“I’ll try to be more composed next time I can watch,” he rubbed the back of his neck with a hesitant laugh. She remembered? But that was five years ago!

“If there’s a next time!” Isalaina smirked. “I’m not so sure, after that performance. You’re festival storyteller for life now.”

“Well, I’ll have to get Elun started on my next entrance. He’s going to have to get used to topping himself year after year.”

Jaranin chuckled half-heartedly. He could almost feel little embers burning through his clothes all over again. “No fireworks. Promise.”

They shared a laugh.

----
[Excerpt from The Victor's Blade; all content subject to change.]


From Him, To Him
Posted by Jeannette Jonic at 8:30 AM No comments:

I first stumbled across video essayist Aleczandxr while preparing for my Type Casting post on Riza Hawkeye of Fullmetal Alchemist. The depth he delved into another character from that show, Solf Kimblee, was incredible, especially given how much it allowed me to appreciate a character I honestly hadn't cared much for nor understood well upon my first viewing of the show.

Aleczandxr frequently examines characters and themes from various anime, digging deep for some great insights. He's one of few writers who can clearly express philosophy and other difficult topics while still putting it into terms I can understand. And it doesn't hurt that his repertoire of reviewed anime has some of the greats such as Hunter X Hunter, Ghost in the Shell, Berserk, Fullmetal Alchemist: Brotherhood, and My Hero Academia.

Aleczandxr dabbles in some video game analysis as well, and his video analyzing his love for The Legend of Zelda: Twilight Princess convinced me that I need to replay the game just to experience my own love for it all over again.


Or, if you'd rather stick with my stuff today instead of checking out someone new, how about a scene featuring my favorite couple, Jaranin and Isalaina? Check back in half an hour to read an updated version of a scene I posted on the blog a while back!
Posted by Jeannette Jonic at 8:00 AM No comments:

April Recommendations (2 of 4): Weight of Cinema

I first noticed Weight of Cinema when they put out an incredible video series analyzing Avatar: The Last Airbender's writing and cinematography. It was well-edited, the voiceover/script work was phenomenal, and the carefully-crafted and loving analysis was a delight to behold. I'd find myself eagerly awaiting each new entry in the four-part series, and I felt a profound melancholy when it was finished!

I just finished watching their three-part series on Peter Jackson's The Lord of the Rings trilogy's themes and emotional impact.

I see they have a podcast too, and while I haven't checked that out yet, I certainly intend to in the future.

If you enjoy the kinds of content I put out, you'll enjoy Weight of Cinema's eloquent video essays for sure.


But if you're not really feeling checking out someone different (aw, it's okay, I'll keep you company!), you might find this series I did on the six elements of a story an interesting read.
Posted by Jeannette Jonic at 8:00 AM No comments:

There's nothing quite as memorable, unique, and soothing as Sage's voice--both his physical voice and his writing voice.

Each video begins with the visuals and sound of pattering rain, immediately washing over my soul and preparing me for another one of Sage's well-thought, quiet essays. As he says in his video "To Understand Rain," his videos are filled with a refreshing melancholy, a pondering stillness to them, just like the rain.

He covers a wide variety of media from video games to cartoons to superheroes, but most of the videos I've seen are his essays on anime. Despite having not even watched Naruto (and thus not having the enormous connection of nostalgic affection for it as most people), I found his video analyzing the portrayal of Shikamura's grief to be absolutely stunning... and profound.

Knowing how many of you enjoy anime (and how hard it can be to relax in this crazy, fast-paced world), I definitely recommend checking out some Sage's Rain videos.


But if you're really not feeling checking out someone new (but still in the mood for a little melancholy), check out this snippet from the then-prologue (well, now it's part of the first chapter...) of The Victor's Blade. Bonus: You get to see a glimpse of my mood back when I had only just begun rewriting an older draft of TVB Book 1.
Posted by Jeannette Jonic at 8:00 AM No comments: