Excerpt - The Misadventure of Donovan and Aevyrn, Part 1


You guys thirsty for an excerpt? I know I am. I happened to be going through some of my old files and found this baby. Gave it a little polish (as it's a bit of an oldie) and voila.

This sucker features characters and a fictional universe I developed alongside my friend Mitchell Anderson through an original fantasy roleplay we'd done. It started as a one-off and ended up becoming an entire book (and, of course, by the time I was done with it, plans for a series of books).

Donovan Luka is Mitch's character, though this particular "misadventure" is of my own creation.

Note (8-26-19): Noticed a mistake while reading back through these. Revised for consistency in later sections. 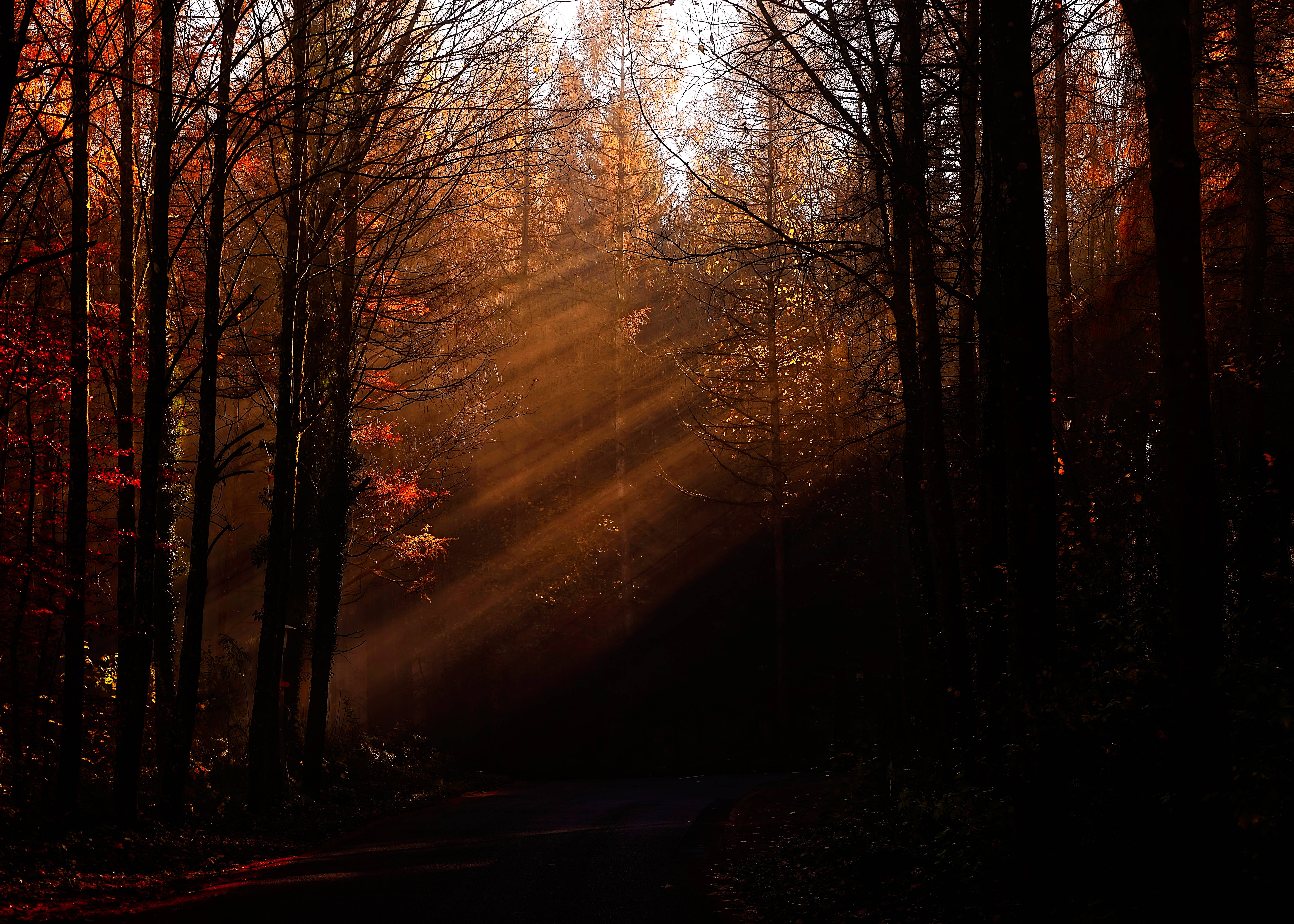 Branches snapped and leaves crackled beneath our feet as we stumped through the forest. We were two young men on a quest—handsome, dashing, fearless—and absolutely, positively knowing exactly where we were going. Naturally.

Donovan was a few strides ahead, as always, wading his way through mountains of leaves. As we walked, he pushed his way past whatever branches hung in his way—which were many, since my fellow elf was a good six and a half feet tall. I myself was on the shorter end, standing a few inches below him, but I still ducked every so often to avoid the drooping limbs.

“Are we nearly there?” I panted.

Donovan stuck his hand in the air, the signal for quiet. Without a word, he continued his lunge through the wood.

I snorted crossly but followed in my friend’s shadow.

Despite my exhaustion, hunger, and growing irritation at Donovan’s silent march, I had to admit that the forest was a lovely sight. Tall, thin saplings rose around us in every direction: their bared branches scraped the forest sky. Muted, mottled autumnal colors swirled around us: dusky brown, dim orange, and golden yellow. The crisp breeze that blew through the trees was nothing like the bitter winds of home.

Nevertheless, when you have been tramping for hours and have not eaten in three more, any forest—no matter how lovely—is going to lose its enchanting qualities quickly indeed.

“Donovan, since you insist on leading us straight into nowhere,” I finally huffed as I clapped my hands on my knees, panting for breath. “Then I hope you don’t mind if I take a well-deserved rest.” At that last word, I dropped my seat to the cushion of leaves on the forest floor.

Donovan paused where he was and slightly tilted his head in my direction, a ghost of a smile lurking on his features.

At least I’d gotten his attention. And gotten him to stop.

I remained as I was, staring at him, mustering up all the miserableness I could. Indeed, I was quite miserable without the mustering, especially as I was frying under my woolen overcoat and hat. Not the best clothes for a forest hike, as I now knew. I yanked my hat off my head and fanned myself with it.

Donovan shook his head, chuckling as he pressed onward.

“Oh, Donovan, come along!” I scrambled to my feet, scattering leaves in a swirl of crisp chaos. “If you’re going to drag me on an expedition on our holiday, you have to at least tell me where we’re headed!”

Donovan mounted a log and shoved a low-lying branch out of his face. Still perched like a bird on the log, he shot me another glance over his shoulder before replying with a shrug, “Anywhere.”

I adjusted my cap as he passed the flexible branch to me, and I in turn pushed it aside. “Donovan Luka, of all the horrible things you’ve done to me in the past, this must be by far the worst!”

He laughed as I followed after him in a huff. I may have been only half serious, but I was angry nonetheless.

“You know, when you suggested we go exploring, I nearly thought you’d get us tumbling into some terrific adventure again.”

Donovan passed me another branch, and still regaining my breath I had no choice but to pause as I accepted it and shoved it out of my way.

“Now an adventure is one thing, Donovan—I’ll be the first to sign up for one, as you know. And a nice walk on a holiday, well that’s an entirely other thing—but just as pleasant and just as well-received—

“But this, my friend, is neither an adventure, nor a holiday. This, Donovan Luka, is absolute madness, and I’ll have you know that I would far rather be sitting at base right now drilling with the Commander than be wandering around aimlessly, for all practical purposes, quite lost.”

“We’re not lost for all practical purposes,” Donovan said in his deep, carefree voice that fetches all the ladies’ attention. “We are quite lost.”

Needless to say, a hundred years of training side-by-side with Luka had still not trained me for that. Incredulous, I stared at him, speechless and momentarily immobile. “Lost?!” I clutched my head, bellowing to the sky in my frustration.

Neither the sky nor Donovan cared.

“I could be quaffing a brew, playing cards with the lads! Why oh why did I have to follow you in hopes of an adventure?” I moaned while staggering after Donovan, who simply continued to chuckle.

I was laughing myself on the inside, though I’d never admit it to him. He’d played quite the trick on me, but we both knew I’d follow him to the ends of the earth—whether I was missing training or holiday or a visit into town to dance with the prettiest ladies in the land.

“It was such a lovely holiday, too…” I mounted a rock, pursuing Donovan as he jumped from crag to crag like a doe.

The terrain was growing steeper, and we could hear water in the distance. Rocks, great and small, began to jut from the forest floor like gems studded in a necklace.

“Come on. Don’t tell me you didn’t think it was dull,” Donovan said as the ground began to level off again.

With no more acrobatics to perform, I was able to catch up to him at last. We walked side by side now.

“I mean,” he continued, “nothing further from an adventure than staying on base, Ave. I’m just rescuing you from boredom!”

“You interrupted my nap for this!” I scoffed, still unwilling to take the blame for my part in this impossible march.

“Ah, right, your nap. Like an unused hound who’d leap at the scent of fox again.” Donovan cast me a very wise and irritating grin, and we both knew he was right. Despite my reputation as a home man, I really was an adventurer at heart, one of few qualities we both shared.

“All the same,” I remarked as I hopped over a thick rotten log, “I gave up my precious holiday to meander! We don’t get many holidays nowadays, what with graduation approaching.”

Graduation. The topic gave me pause. “What exactly are you planning to do after the Academy, Donovan?”

“Oh, I’ll figure something out. There must be need for a good soldier somewhere.” He shrugged.

It still boggled the mind: him going to the illustrious Academy and yet with no ambitions. Not that I was much better; there was a reason Donovan hadn’t repeated the question to me. Everyone in the Academy knew where I was bound.

“That’s the way, Aevyrn,” the boys would say as they slapped my back, chuckled, and nodded. “Royal Guard, that’s the post for you! No need to wish you luck; you’ll get the spot for sure.”

Their confidence was kind, but not reassuring. I had my reservations about my qualifications for the Guard. Still, it was the only post I’d ever wanted to hold, for several reasons.

Mainly, I had nothing else to which to aspire. I had no inheritance; my elder brother would take over the castle and the surrounding land. The only money I had to my name was the gold my parents had sent with me to put me through the Academy. Indeed, the sizable income of a Royal Guard should be a very attractive alternative to a boy with no inheritance, but I knew I was after something more than money.

As I mucked with Donovan through the woods, it was more clear than ever: the reason the Royal Guard attracted me was not simply my loyalty to the crown nor even my mild interest in politics, but the fact that the Guard might offer me the taste of adventure that I’d always pined for growing up in Castle Torrinway.

And it was while these thoughts filled my head that I bumped into Donovan’s outstretched arm with an unsuspecting grunt. Donovan quickly hushed me.

I blinked as I glanced from him to the surrounding forest, and though I could see nothing, my hand flew to my side—

I resisted the urge to spit with disgust as I recalled, too late, that I had left my blade back at the inn. All that met my hand was the pommel of my father’s hunting knife.

Well, Ave, looks like we may be getting your adventure, after all… came Donovan’s voice in my head.

What is it? I asked, still unable to see anything between the trees that here grew quite dense and formed a tight circle around us. It had gotten so dark. How long had I been lost in my musing? I resisted the urge to curse. Had I so quickly forgotten my century of training?

As if to redeem myself, my hand wrapped around the hilt of the knife that stuck out of my belt. Better it than nothing.

Donovan’s voice brought me back to the situation at hand. Not sure what it is exactly. Heard some rustling that-a-way, he wagged his head ahead and to our left. Too big to be a raccoon or fox.

He shook his head.

We stood, uncertain, glaring into the creeping darkness of the evening forest.