Theme Talk: Living for Oneself in Don Bluth's Thumbelina


Many people consider Disney the epitome of classic animation and a hallmark of their childhood. I’ve always enjoyed Disney, but there was a second animation studio I cherished just as much as Disney: Don Bluth Productions. Bluth’s The Land Before Time, An American Tail, Rock-a-Doodle, The Pebble and the Penguin, and Anastasia were just as iconic to me as any Disney film. These films bring me right back to my childhood.

As much as I enjoyed them, however, I assumed I only appreciated many of them due to nostalgia. But one Bluth film I was shocked to find was still relevant me—and to our culture today—was Bluth’s retelling of Thumbelina. 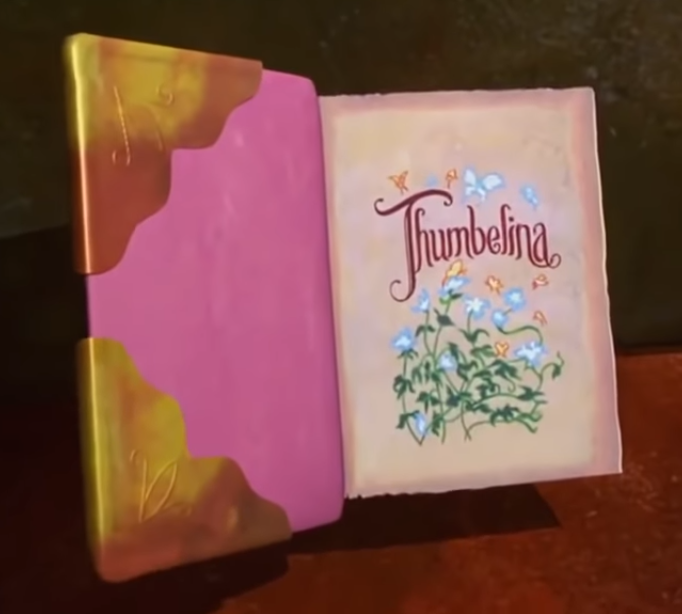 Most might recognize Thumbelina as the story about a girl who was born no bigger than a thumb. In Bluth’s version, Thumbelina is kidnapped, whisked away from her home and loving mother. She struggles to return home before winter comes to freeze over the whole forest... and her with it.

From the very start of the film, Thumbelina struggles to find her identity. “Who am I?” she wonders as she views a “great, big world”1 that’s so much larger than her. “There’s only one peculiar thing that bothers me... / Seems I’m the only one my size,”2 Thumbelina mourns. 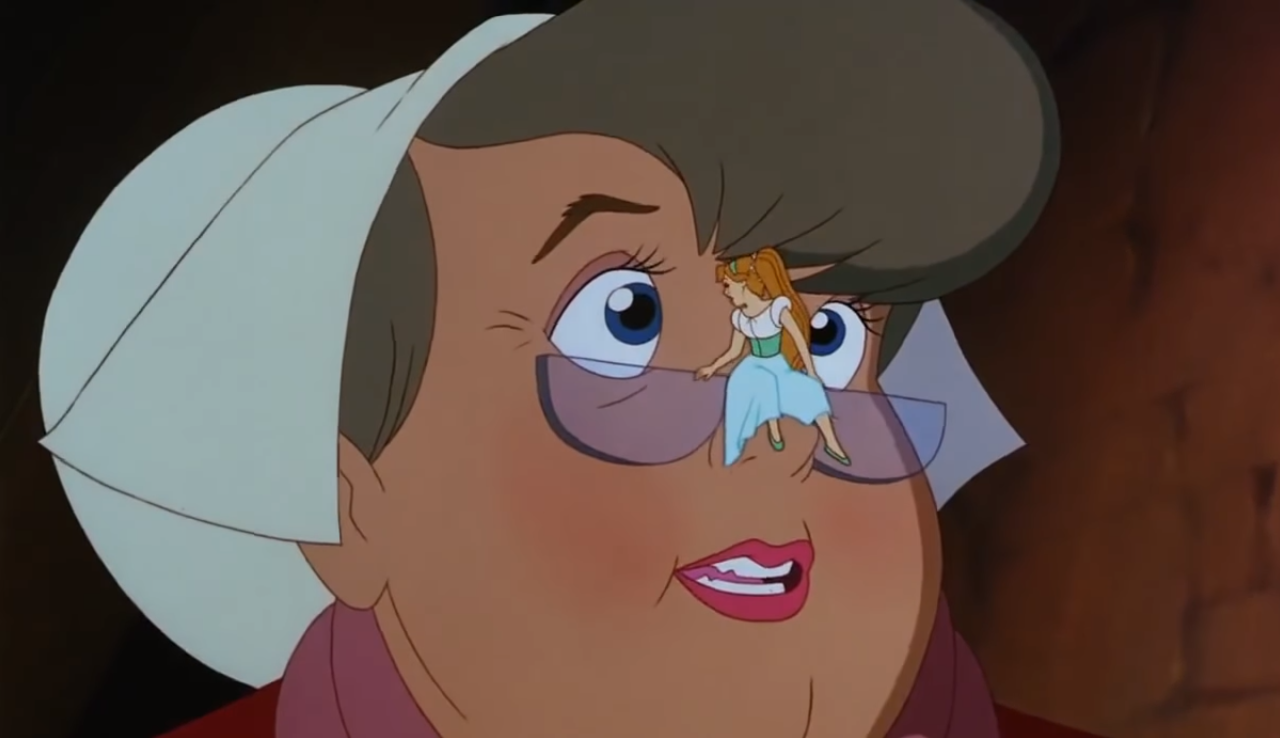 Despite the warm love of her mother, Thumbelina is inherently isolated due to her tiny size. There’s no one quite like her in her whole world. This leaves Thumbelina feeling lonely, and her heart yearns for someone who understands her, someone like her to enjoy “a happy ending” with. 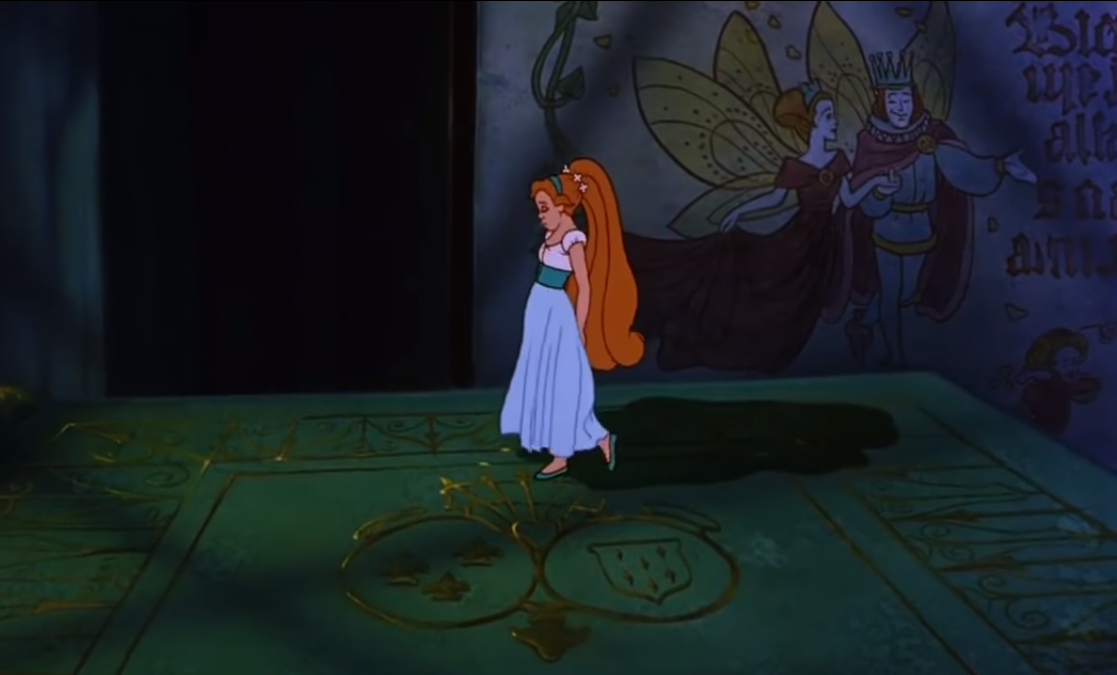 And, soon enough, she does indeed meet someone who understands her: a fairy-prince by the name of Cornelius. He’s charming, funny, sweet, and caring, and they fall in love. Cornelius promises to protect Thumbelina and provide for her: “Anything that you desire, anything at all, / Every day, I’ll take you higher, / And I’ll never let you fall.”4 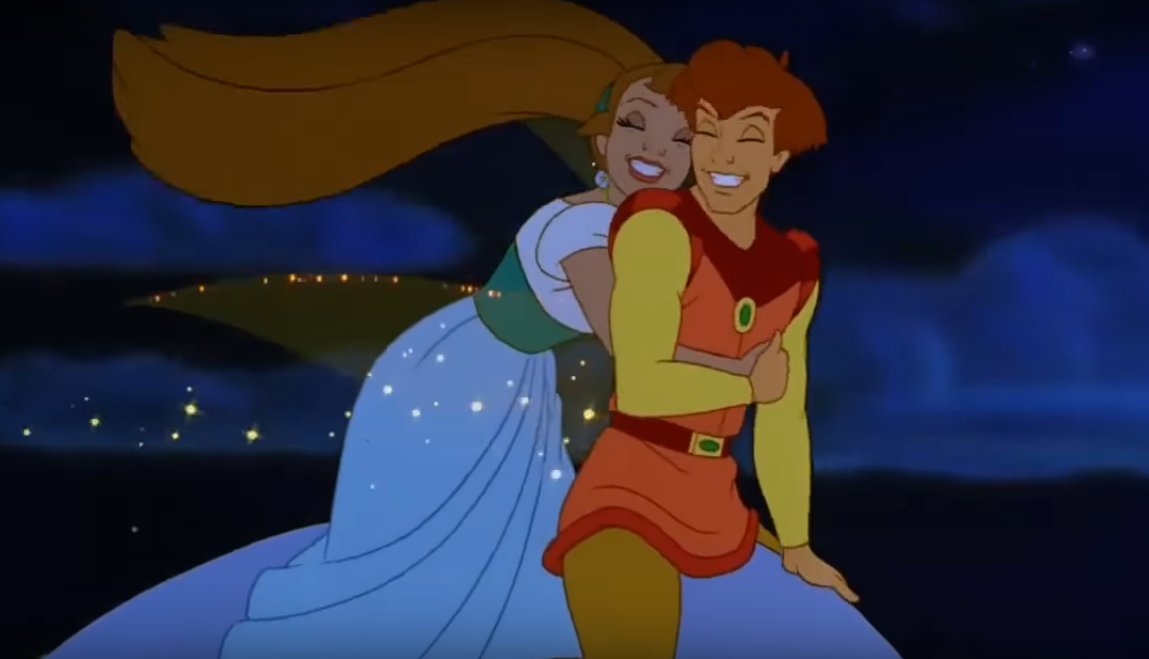 It’s important to note the words “anything that you desire.” Cornelius wants to provide for Thumbelina’s needs and desires. He wants to make her happy, not out of manipulative self-interest but out of love.

But soon Thumbelina meets others who do not have her best interests in mind. She comes across a toad, a beetle, and a fieldmouse, all of whom seek to use Thumbelina for their own interests.

Mrs. Toad’s son is infatuated with Thumbelina, having seen her dance and sing with Cornelius. So Mrs. Toad kidnaps Thumbelina, informing her she’ll soon be joining the family by marrying her son! When Thumbelina, understandably surprised and confused, politely declines. Besides, she already has someone she wants to marry: Cornelius!

Well, this won’t do for Mrs. Toad. She seeks to trick Thumbelina into agreeing to the idea. First, she begins by telling Thumbelina that what she wants isn’t really what she wants. After all, does she really want to be a little housewife?

The seed of doubt is planted. Thumbelina isn’t so sure about this. 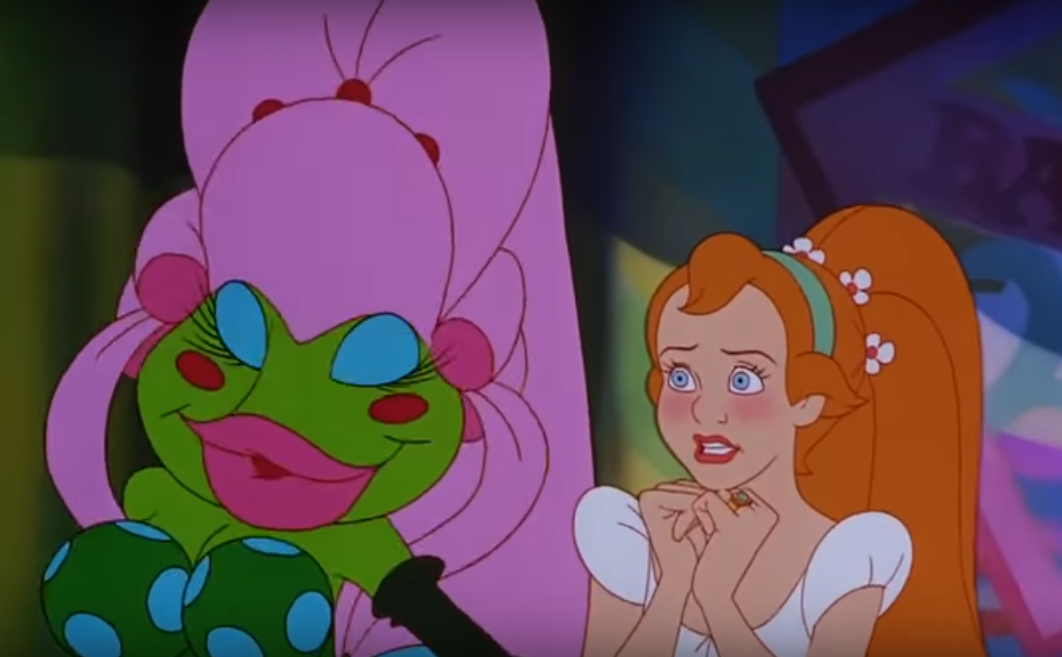 Then the toad offers the solution: “[D]on’t marry the prince!”6 Instead, join the toad family for fame, fortune, and fan adoration.

It doesn’t sound too bad of a life. Thumbelina gets swept up in the moment and almost agrees to the whole affair. 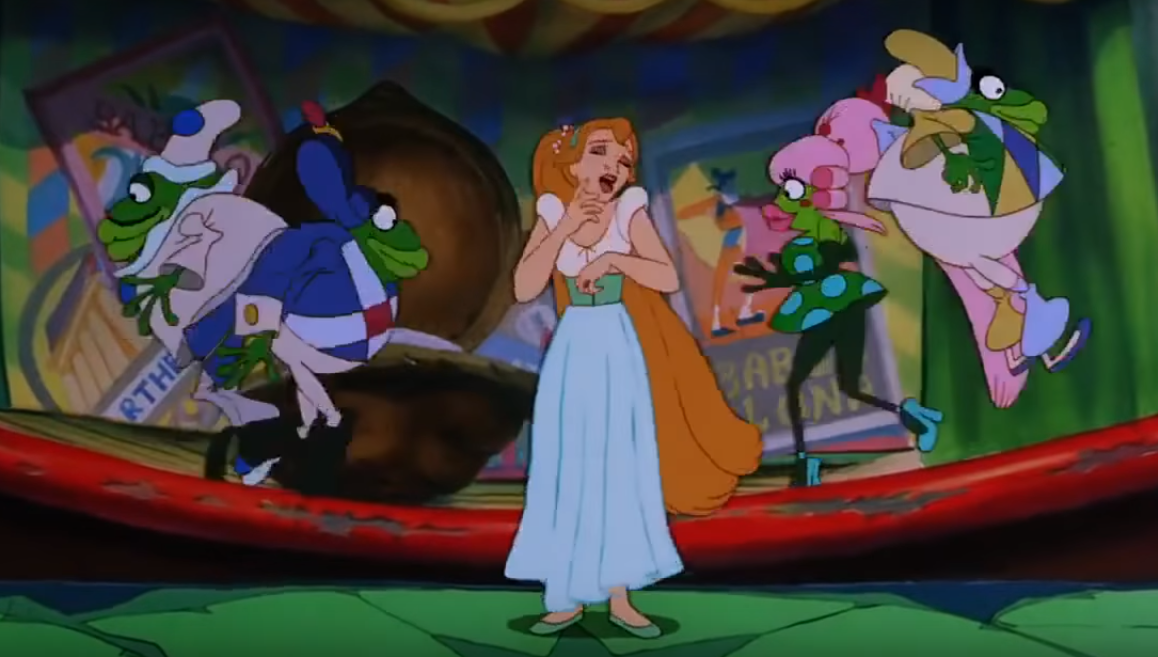 But as the glitz and glamor wears off, Thumbelina snaps back to reality. She doesn’t want to travel the world and be a star! She’s in love with Cornelius!

Left all alone, unsure what to do or how to get back home, Thumbelina is at a loss. But this is when she meets her greatest ally, Jacquimo, a friendly sparrow who is willing to drop everything to help her.

Jacquimo gets Thumbelina back on track, heading home so she can reunite with Cornelius. Jacquimo leaves Thumbelina with his mantra to “follow her heart”7 when things get difficult. “You’re sure to do impossible things / If you follow your heart...”8 Jacquimo reassures Thumbelina and the audience.

Watching this film as an adult, I must admit I scoffed at this line. Yep, I’ll just ‘follow my heart.’ That’ll help me get whatever I want out of life, I thought with typical adult cynicism. But I viewed on.

Thumbelina’s next trial occurs as soon as Jacquimo has flown off. Left alone, she is once again prey for manipulative passersby, and a seedy beetle comes along to sweep her off her feet—literally. Snatched away again, Thumbelina has little choice but to go along with the beetle’s plans. Another creature enraptured with Thumbelina’s singing voice, the beetle decides to rebrand her as a ladybug so she can be a star. His star.

Thumbelina sings at the beetle ball, but as soon as the audience of beetles realize she’s not an insect like them, they boo her off the stage. With his plans for a big show in ruins and his reputation in the tank, even the beetle turns on Thumbelina. They say she’s hideous, ugly. But what they’re really saying to her heart is, “You’re not worthy of time or attention. No one wants you.”

Driven out of the beetle’s lair, Thumbelina finds herself more lonely than ever before. Worn out, completely lost, and now with the echoes of the beetles’ lies ringing in her mind, she’s certain now more than ever that “[i]t’s impossible” for her to return home.9

She’s given up on her desires.

This is when the fieldmouse stumbles across Thumbelina, rescuing her from the cold and bringing her inside her little den. At first, Ms. Fieldmouse seems like a friend and ally to Thumbelina; after all, she saved Thumbelina’s life. But as it turns out, Ms. Fieldmouse is just as manipulative and ill-intentioned as Mrs. Toad and the beetle before. Ms. Fieldmouse tells her that Cornelius has been found frozen solid while searching for her—presumably dead. She then holds Thumbelina’s rescue over her head, stating Thumbelina now owes her. And, just like the others, she too seeks to impose her own desires on Thumbelina, telling Thumbelina she ought to marry Mr. Mole... though Ms. Fieldmouse leaves out the fact that Mr. Mole will pay her handsomely for arranging his marriage with Thumbelina.

Once again, Thumbelina offers some resistance, again quoting her love for Cornelius.

“Love?” Ms. Fieldmouse proclaims with a roll of her eyes. “Love is what we read about in books, my dear.”10

As Mrs. Toad dismisses the idea of living as a housewife and the beetle dismisses Thumbelina’s appeal, Ms. Fieldmouse seeks to manipulate Thumbelina by telling her to be practical. After all, says Ms. Fieldmouse, love is just a fairytale: “‘Here comes the bride,’ is a lovely little ditty / But marrying for love is a foolish thing to do. / ‘Cause love won’t pay the mortgage or put porrige in your bowl...”11

This is the most reluctant Thumbelina has been to someone’s suggestions the whole film. But, with Cornelius apparently dead and with seemingly no other options, Thumbelina decides she will indeed marry the mole.

Upon my adult viewing of the film, I found myself getting more and more frustrated with Thumbelina. Why in the world was she listening to strangers and going along with their ideas? She was letting herself become a dish rag, used by every person who walked by.

But that’s when it clicked for me. Her compliance is intentional. This is the core theme of the film.

Thumbelina is a fairytale, and many fairytales have stories to tell that come equipped with a lesson: either a virtue to be admired or a warning to heed. Don Bluth’s Thumbelina is no exception. Its warning?

In each situation, Thumbelina is so desperate to please people that she willingly gives up her desires to take on the desires other people try to impose on her. In favor of the life others want her to lead, she gives up on being true to herself... she gives up on following her heart.

Following her heart is difficult. It’s hard to make her way back home to wait for Cornelius. It’s difficult to keep fighting for her love-story when everything seems to work against it.

But when we don’t allow our desires to die, beautiful things can happen.

Standing at the altar with Mr. Mole, Thumbelina is overwhelmed with memories of Cornelius. She finally comes to her senses and proclaims to all the assembled woodland creatures that she cannot marry Mr. Mole. She’s in love with Cornelius even now.

Thumbelina flees the wedding, but her heart is still broken. What more does she have to fight for? Everything she desired, the life she wanted, is gone.

Even when Jacquimo arrives to inform her that he’s found Cornelius’s homeland and can fix everything—all she needs to do is sing—Thumbelina tries to push him aside. She’s lost all hope and faith. She’ll never be able to live out her dreams, her own life. She’s given up on marrying Cornelius. She claims all she wants to do is go home—live out the rest of her life in solitude and peace.

But Jacquimo knows this isn’t really what Thumbelina wants. The life she’s wanted to lead was to marry Cornelius and visit the Vale of the Fairies. So he urges her to, for once, choose what she wants. To live out her own life and awaken the wintry, sleeping world that awaits her.

When Thumbelina finally decides to do exactly that, the whole scene changes. The sun arrives to melt winter’s chill. Cornelius arrives, having been thawed from a block of ice. And Thumbelina finally discovers who she really is: a fairy, as wings finally sprout from her back, allowing her to fly. It’s a perfect symbol of the freedom that comes when we stop letting others drive our lives and instead pursue our deepest, healthy desires. 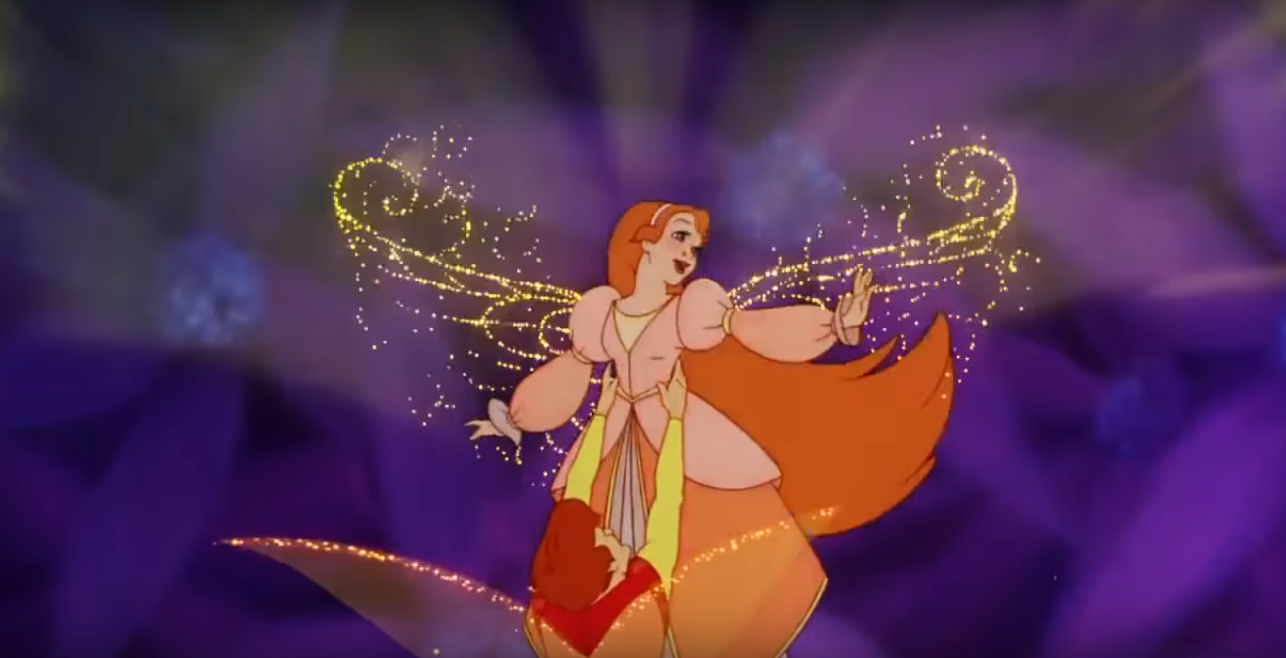 Who would have thought that a film I cherished so much as a child could resonate so strongly with me as an adult and could be so pertinent—and poignant—to many adults today?

---
Notes and References:
All photos are used under US “Fair Use” laws. Thumbelina and all related terms property of Warner Bros. Entertainment Inc.. And I am not affiliated with them.