"This is my cocoon dream. The nightmare that has been tormenting my existence in this world... I remember cold winds stinging my cheeks that were wet from tears... I was too tired to think. I remember wanting to become a stone. A stone that doesn’t feel pain. Or sorrow."1


The seeming simplicity of Haibane Renmei hides fascinating depth just beneath the surface. No character mirrors this quality more than Reki. 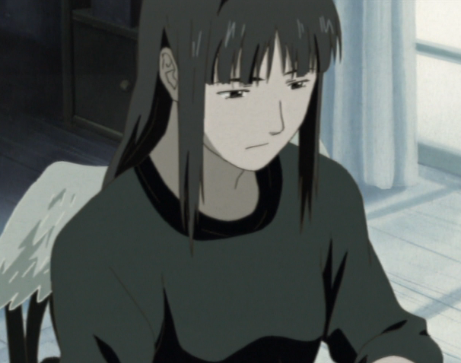 Reki, along with the rest of the main cast, are Haibane, beings nearly indistinguishable from a human except for their angel-like wings and floating halos. It’s said becoming a Haibane is a rebirth, but no one knows why the Haibane are born or who they were before, as these memories all disappear the moment a Haibane is born. Haibane must lead highly-structured lives as dictated by the shaman-like people called the Toga. Part of this structured life includes living in one of two abandoned buildings on the edge of the walled-off town of Glie. Only the Toga are allowed to leave Glie, but it’s a good life.

Though it’s not all sunshine and rainbows.

From episode one the show implies there’s something significant about Reki. We eventually discover Reki has been singled out her whole life: she is a “Sin-bound” Haibane, having committed some wrong in her previous life. Even though Reki cannot remember what this sin was and doesn’t know what to do to atone for it, most Haibane avoid Reki out of fear.

But there’s one Haibane who sees Reki as someone worthy of attention and care: her best friend and mentor, an adult Haibane named Kuramori. But just as Reki opens up to Kuramori, Kuramori undergoes her “Day of Flight” and leaves Glie. The Day of Flight is a kind of second death for a Haibane, a peaceful ascent from this world. Every Haibane undergoes the Day of Flight, but no one knows when it will happen nor why.

Reki feels she’s been abandoned by the one person she felt understood her. Desperate to find answers and to reunite with her departed friend, Reki drifts even further from the other Haibane of Old Home, instead befriending the Haibane who live in the abandoned factory on the other side of town. In particular, Reki bonds with a male Haibane named Hyouko, who is determined to help Reki.

Hyouko and Reki concoct a plan to scale the walls and escape Glie. But touching the walls is forbidden and allegedly brings a curse upon those who do so. Sure enough, Hyouko falls and sustains injuries while trying to scale the wall; and he and Reki are punished for their disobedience. Rather than helping Reki deal with Kuramori’s loss, the incident only causes more tension and strained relationships, not just between Reki and Hyouko, but also between Reki and the other Haibane of the factory, who blame Reki for Hyouko’s injuries.

This leaves Reki feeling abandoned or misunderstood by Old Home and cast out from the Factory. She is Sin-Bound without fully knowing what that means, for no one can tell her what sin she committed or what she must do to fix it before her own Day of Flight arrives. All this causes Reki to feel bitter and lonely, haunted by her sins. As the years pass, Reki feels she’s only adding to her sin rather than atoning for her initial wrong.

Reki’s sins are complicated and multifaceted. Even her first sin is only hinted at, and Reki can recall nothing about her previous life. Not even Reki herself understands her sins, as evidenced by her faulty view of her own behavior.

Reki claims that her worst sin was treating the newest Haibane, Rakka, as a tool to be used. Reki says that all her time spent caring for Rakka when the new Haibane came was all just an act to earn redemption. She says she was only acting selfishly and manipulatively, using Rakka to redeem herself rather than genuinely helping Rakka out of a selfless nature and a desire to help someone else.

However, her own behavior contradicts this.

For one, even before Rakka is “born,” Reki speaks tenderly to Rakka’s cocoon. There’s no need for Reki to put on an air of gentleness here; she is alone with Rakka’s cocoon, with no guarantee that Rakka can hear her inside. But in this moment of vulnerability, Reki vows she’ll help and protect Rakka and asks Rakka to help her. This is no manipulation; it’s the heartfelt request of a young woman who remembers what it was like when she was the frightened newcomer in the cocoon, who Kuramori took under her wing.

Once Rakka emerges from her cocoon, Reki remains with her every step of the way. Reki cares for Rakka like an older sister, tending to her like she were family, even staying up all night when Rakka’s wings first burst from her back, causing her great pain.

Certainly, Reki could have tended to the new Haibane out of selfishness, but she goes through such incredible lengths to care for Rakka that it’s clear she’s doing so out of concern for a newborn Haibane she sympathizes with. Reki waits with Rakka through the critical first hours when Rakka’s wings emerge. Reki brings Rakka medicine and offers her own thumb for Rakka to bite to deal with the pain. Reki is the one to stay and comb Rakka’s new wings until they’re clean.

Reki never would have so tenderly administered to Rakka’s every need if she were only interested in using Rakka. And she certainly would have never allowed the other Haibane to help; but it’s clear that while Reki enjoys helping Rakka, she doesn’t keep the newcomer for herself.

Though Reki might be mistaken about using Rakka, Reki isn’t without her flaws.

When Reki discovers Rakka is also Sin-bound, something shifts for Reki. She clearly sympathizes with Rakka; she knows how scary and intimidating, confusing and isolating being Sin-bound is. She seems to mourn alongside Rakka while trying to shield Rakka from some of the weight of responsibility and fear by giving Rakka medicine that conceals the dark spots on her wings that mark her as Sin-bound.

All the while, Reki thinks for once, there’s someone who’s going through the same things as her. She’s not alone anymore.

So when Rakka quickly and (relatively) easily cures herself of her Sin-bound status, while Reki is still struggling with her own, Reki becomes jealous. Having struggled with bitterness all her life, this is when that flower fully blooms. Reki knows this means she’s being left alone again. And this, in turn, stirs her greatest fear: that she will always be alone, left behind as everyone else redeems themselves, lives a good life, and undergoes their Day of Flight to abandon her.

Reki lets herself slip into her darkest side. As Reki senses her Day of Flight drawing near, feeling all hope is lost, she lashes out at Rakka in anger and self-hatred, trying to push Rakka away. At least if Reki gets her to run away, she will maintain control over the situation. Better than someone abandoning her again.

Reki fears and loathes her dark side and incorrectly asserts that this is her true self, that this is who she’s been the whole time. This is the point where Reki proclaims that she was merely using Rakka the whole time. In her stupor of pain and fear, Reki lies to Rakka and herself, convinced she was never anything more than a terrible sinner who deserves to be alone. Reki lies out of fear; in part fear of abandonment and in part fear of her own dark nature. Reki is flawed and imperfect.

Reki asserts that she’s used Rakka, but this is just her attempt to push others away, refusing help as she has all along. Feeling isolated and abandoned, Reki has tried to become a rock, a self-sustaining person who never needs to rely on others again. After all, the last time she relied on someone, they abandoned her. Even after Reki struggles with her Sin-bound nature for seven long years, she never once asks for help. She won’t let herself.

But despite Reki’s best efforts to push Rakka away, Rakka still refuses to give up on her friend.

When Rakka is first reborn as a Haibane, Reki has almost given up hope for her own future. But Rakka is one of the first brand-new cocoons to appear in a long time, and to Reki, it symbolizes a fresh start, one last hope.

Reki has no idea how true this perception is; Rakka is indeed Reki’s final hope. Though she begins quite naive, Rakka eventually grows through her own experiences thanks to the other Haibanes’ (including Reki’s) care. Rakka’s growth enables her to see Reki in ways no one else has. She sees past Reki’s tough and independent exterior to the hurtbeneath. She learns of Reki’s deepest fears and darkest impulses. Still, Rakka is willing to even see past Reki at her worst, refusing to give up on her.

Reki says she doesn’t want to be saved—that she’s not worthy of being saved. She believes she has to unravel the mystery of her sin and how to atone on her own; and, since she has not (though Rakka has), she must not be worthy to find these answers at all. But the riddle she can’t unravel is that her sin, though complex, only requires something simple to overcome. Reki must learn to open herself up to potential abandonment. She must ask others for help. But Reki has built up pride from her isolation. She hasn’t connected to anyone enough to trust them this much...

The moment Reki cries out for Rakka to save her, the curse of her sin shatters. Her suffering is finally over. And she discovers she was never beyond grace and redemption. Hope was never lost, even when she’d given into despair.

What Reki doesn’t realize is that even her smallest acts of kindness helped bring her to this moment. Neither Reki nor Rakka could have rescued her on their own. When Rakka was still within her cocoon, Reki had asked her for help. She’d promised they’d help each other. And this is precisely what happened. Reki cared for Rakka, helping teach her what it meant to be a Haibane. This enabled Rakka to grow and even surpass Reki in maturity... so Rakka could be there to help Reki in her time of direst need.

Simple but complex. Sinful but redeemable. Fearful yet beautiful. This describes Haibane Renmei... and it describes Reki, too.

---
Notes and References:
Photo of Rakka from VRV.co. All others from Funimation.com. Photos property of their respective owners and used under US "Fair Use" laws.

Haibane Renmei and all related names and terms are the property of Funimation.