Why I Loved Haibane Renmei – And You Might, Too


A somber-colored world of mystery, like a passing dream that fades into bright, cheerful smiles upon waking. All seems well; all seems right.

But these smiles are not all true; some hide deep-seated fears and troubles just beneath the surface. 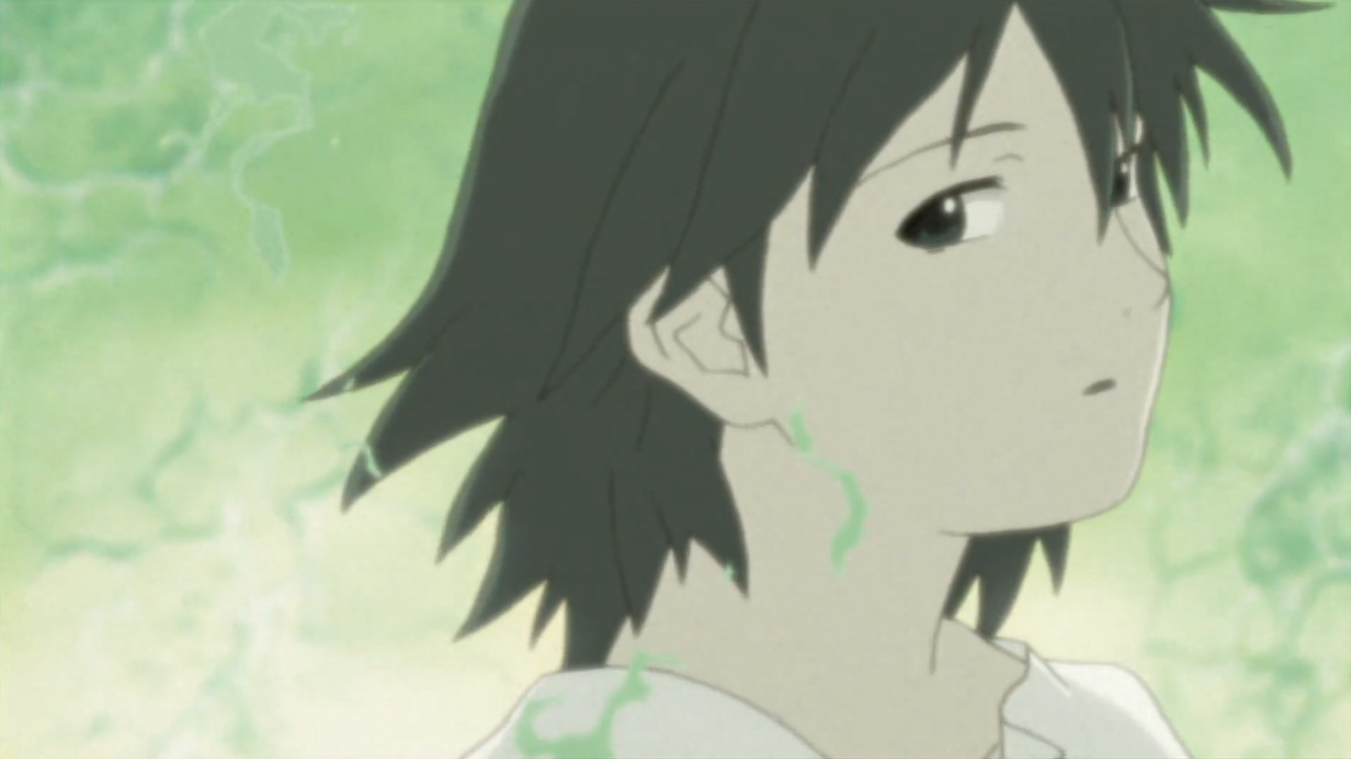 A young girl named Rakka wakes to find herself in a giant cocoon. She has been reborn as a Haibane, a being nearly indistinguishable from a human except for their tiny angel-like wings and floating halos.

The Haibane live in a walled-off world, forbidden from ever leaving. It’s said becoming a Haibane is a rebirth, but no one knows why the Haibane are born or who they were before, as these memories all disappear.

Despite all this, things seem pleasant enough in Rakka’s new home, the town of Glie. She meets cheery new friends and learns the in’s and out’s and do’s and do not’s of being a Haibane. Haibane must lead highly-structured lives as dictated by the shaman-like people called the Toga.

But between trying out various part-time jobs and spending time with her friends, Rakka discovers a darker side to the life of a Haibane: Rakka, as it turns out, is “Sin-bound”: tied to some sin she committed in her previous life. Sin-bound Haibane must learn why they are here and make amends... before their time is up. 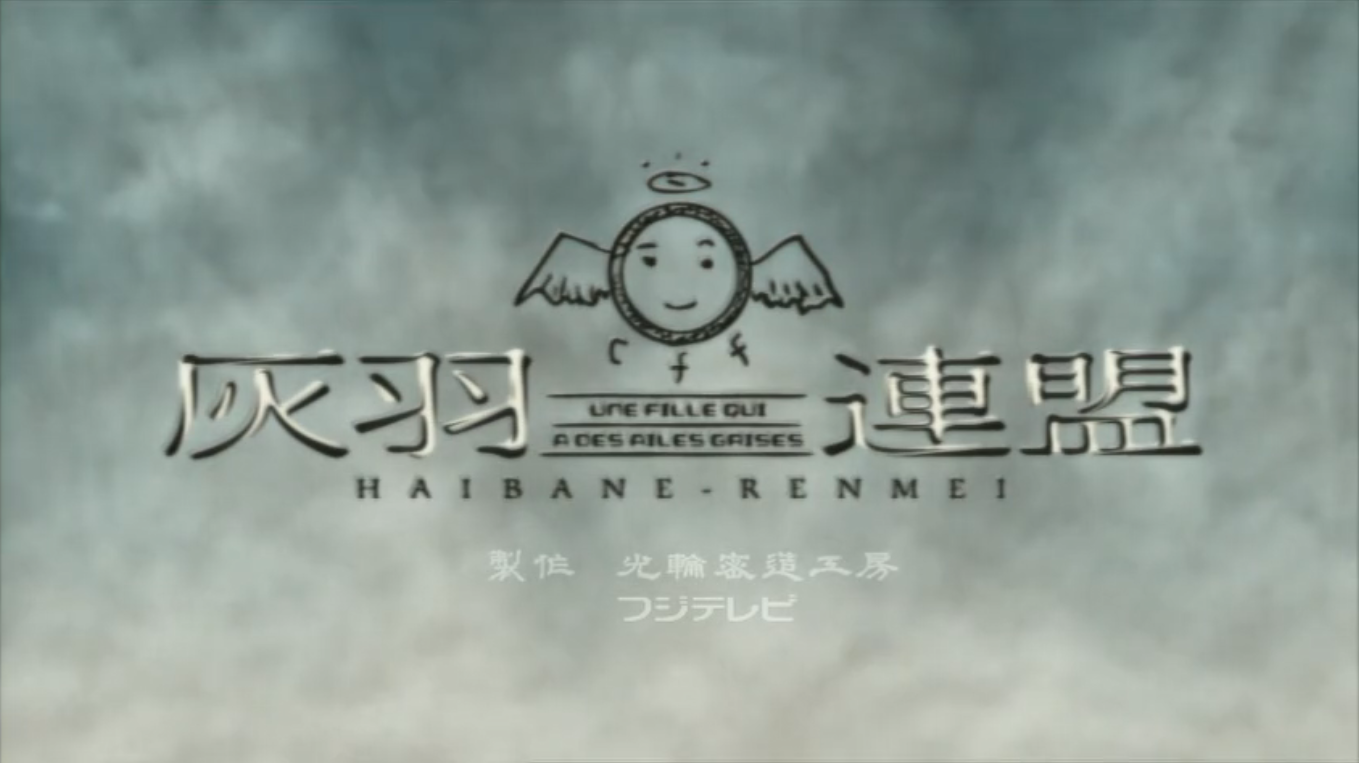 Haibane Renmei has a muted color palette, its desatured colors resembling games built by Team ICO such as Shadow of the Colossus and The Last Guardian. As with these games, this limited color palette leaves the world feeling misty and dream-like. Although this keeps in theme with the show, some viewers may find the desaturated colors to be off-putting. The dated Standard Definition does not help, either. 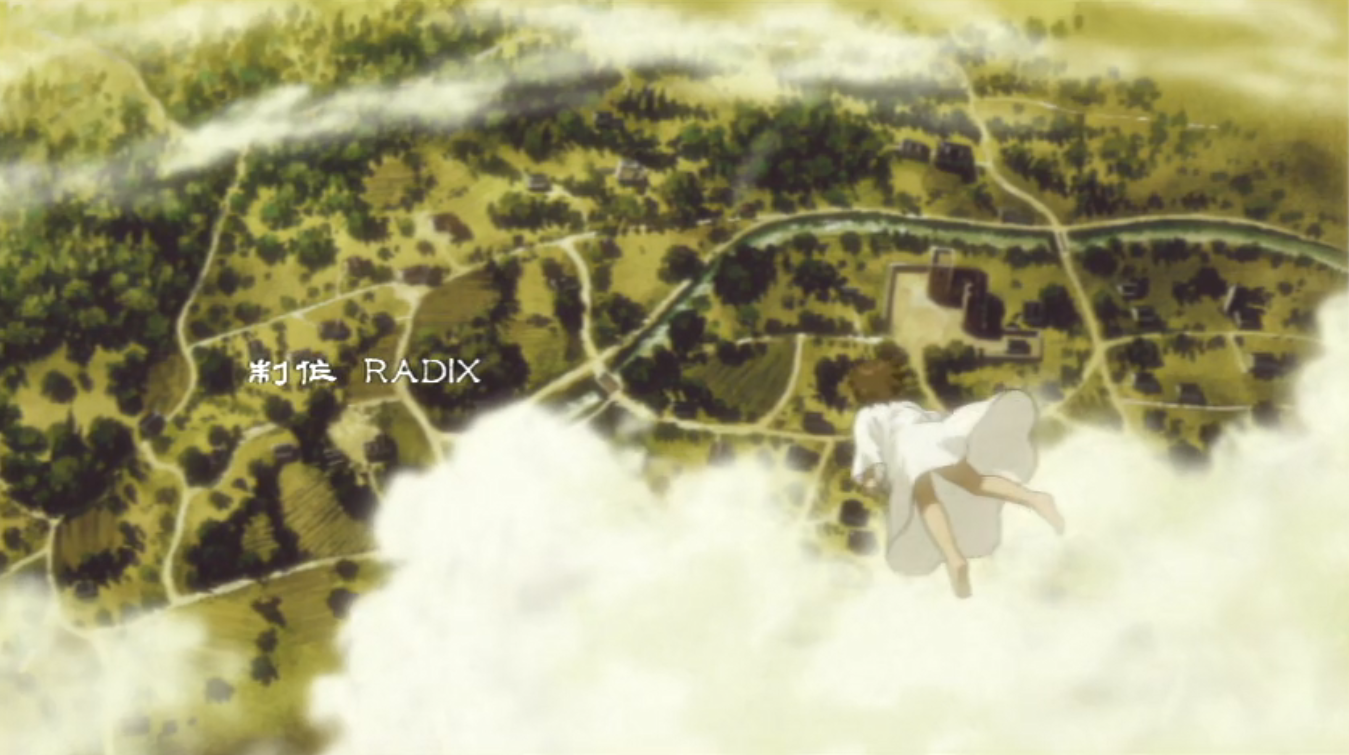 The character designs are also hit-or-miss. Some characters strongly stand out with memorable designs that explain a great deal about them. However, most look bland, including the protagonist Rakka, giving the impression many of the cast are just background characters from other anime. 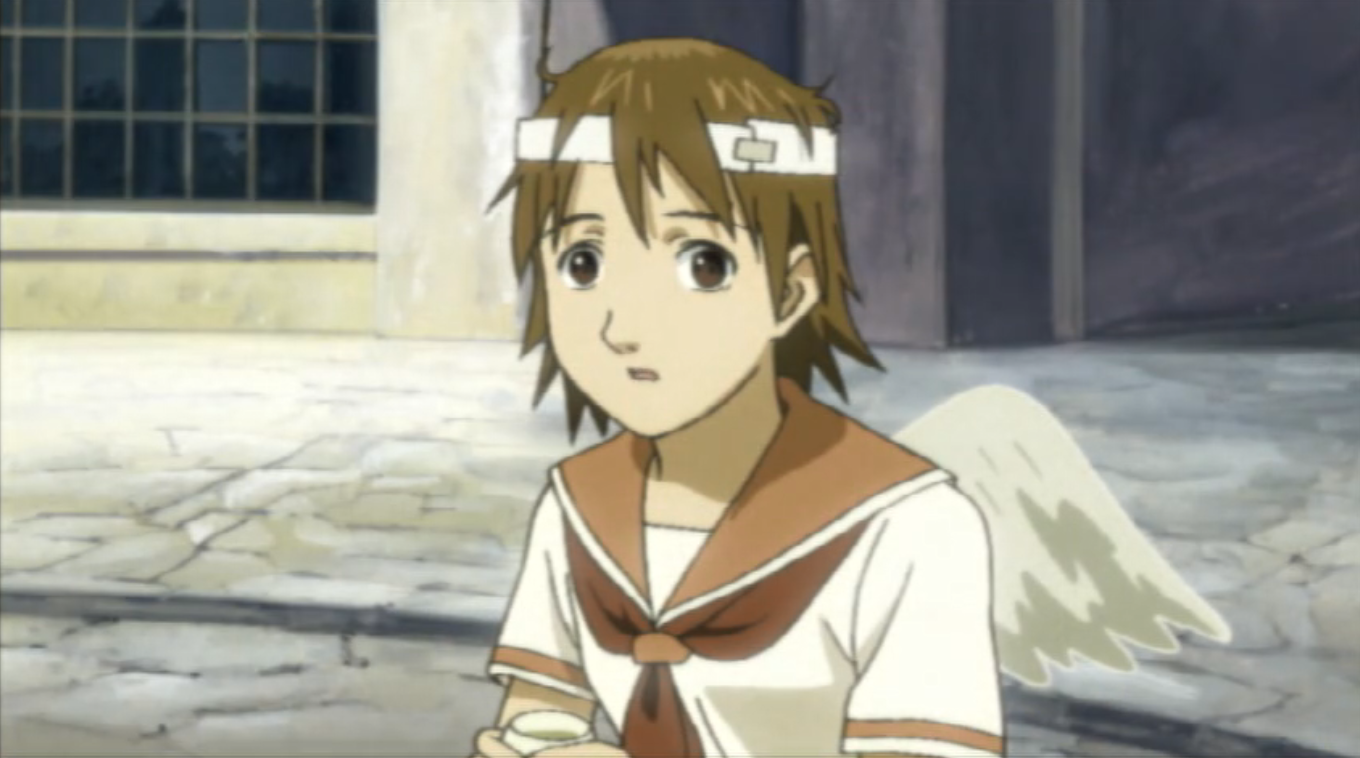 The soundtrack, written by Kow Otani, is charming and memorable. It’s almost folksy, which also adds to the show’s charming slice-of-life moments and helps display what kind of world we’re stepping into. The ending theme is also hauntingly beautiful, working well alongside the visuals to set up the show’s themes.

Fortunately, the characters are better-written than their designs. Each character in the relatively small main cast is a distinct person, often characterized by one defining trait that helps set them apart from the others. Rakka bonds with each character individually, giving you a good sense of who everyone is. Hikari is the bespectacled responsible one, Nemu is a bit lazy and easy-going, Kana is the tomboyish rambunctious one, and Kuu is the youthful ray of sunlight who brightens everyone’s day. Reki is the most-developed of the group, stealing the show almost from beginning to end with her well-rounded personality and air of somber mystery. 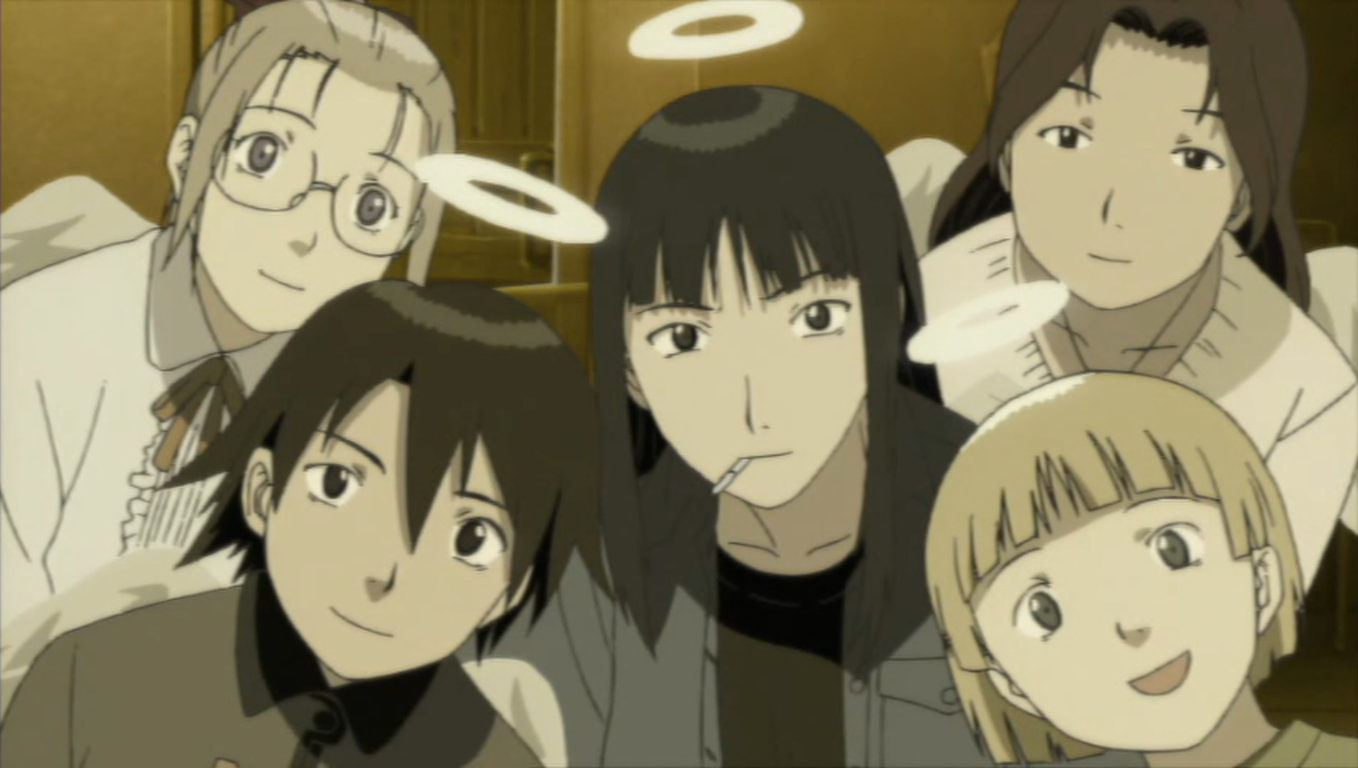 That said, with this kind of a simplified cast, most of the show has a slice-of-life feel, with much of the viewer’s questions about the overall plot being pushed to the latter half of the show. However, even those who aren’t the biggest fans of slice-of-life (such as myself) can rest assured that there is in fact overarching narratives to this tale... it just takes a while to really get into the meat of them. So if you’re a viewer who wants to get to the thick of the tale right away, this might not be a show for you. For those of you who don’t mind a slower pace, however, you’ll be able to enjoy the charming characters as they show and tell you more about their unique world.

The worldbuilding in Haibane Renmei is truly where this show shines. Combined with the mystical visuals and soundtrack, the rules that govern the Haibane’s lives and the Toga that enforce them are simple yet compelling in a minimalistic way.

What also helps sell the mystique of Haibane Renmei’s world is the ambiguity of its writing. There are many elements of the show that maintain their mystique. For instance, it’s never outright explained what Sin-bound Haibane are, but the strong implication at the end results in a surprising—and very relevant—conclusion.

This isn’t a show that will give you all the answers, which I enjoy... yet this lack of answers is also one of the greatest things I find frustrating about Haibane Renmei. The show does not explain some of the worldbuilding elements Rakka herself brings up. Who was Rakka before she became a Haibane? Where is her family? Did she have anyone close to her who still exist outside the walls? None of these questions are ever explained. However, the emotional payoff at the end of the story does help to mend some of these wounds. Still, if you’re someone who needs to have all these kinds of questions answered, Haibane Renmei is not the story for you.

Despite its shortcomings in visual design and some questionable writing choices, Haibane Renmei stands out due to its mystical qualities. From the desaturated visuals to the ambiguity in its plot, every aspect of the show adds to its mysterious, dream-like nature. Its worldbuilding, though limited, is fascinating and almost single-handedly overshadows many of the show’s lesser elements.

This is a story for someone who enjoys delving into strange and interesting new worlds, meeting new people and experiencing strange and fantastic dreams. In fact, Haibane Renmei encapsulates the best parts of a dream: the almost weightless and otherworldly quality, the strong emotions experienced, and the fact that despite it only being a fantasy... there is something intrinsically real that can stay with you long after you’ve finished.

---
All photos property of their respective owners and used under US "Fair Use" laws. Unless otherwise specified, all are from VRV.org.

Haibane Renmei and all related names and terms are the property of Funimation.