The anime Trigun begins like a classic Western. No-good outlaws rule the land, making life especially hard for the ever-dwindling population of law-abiding citizens who just want to eke out a wholesome living. 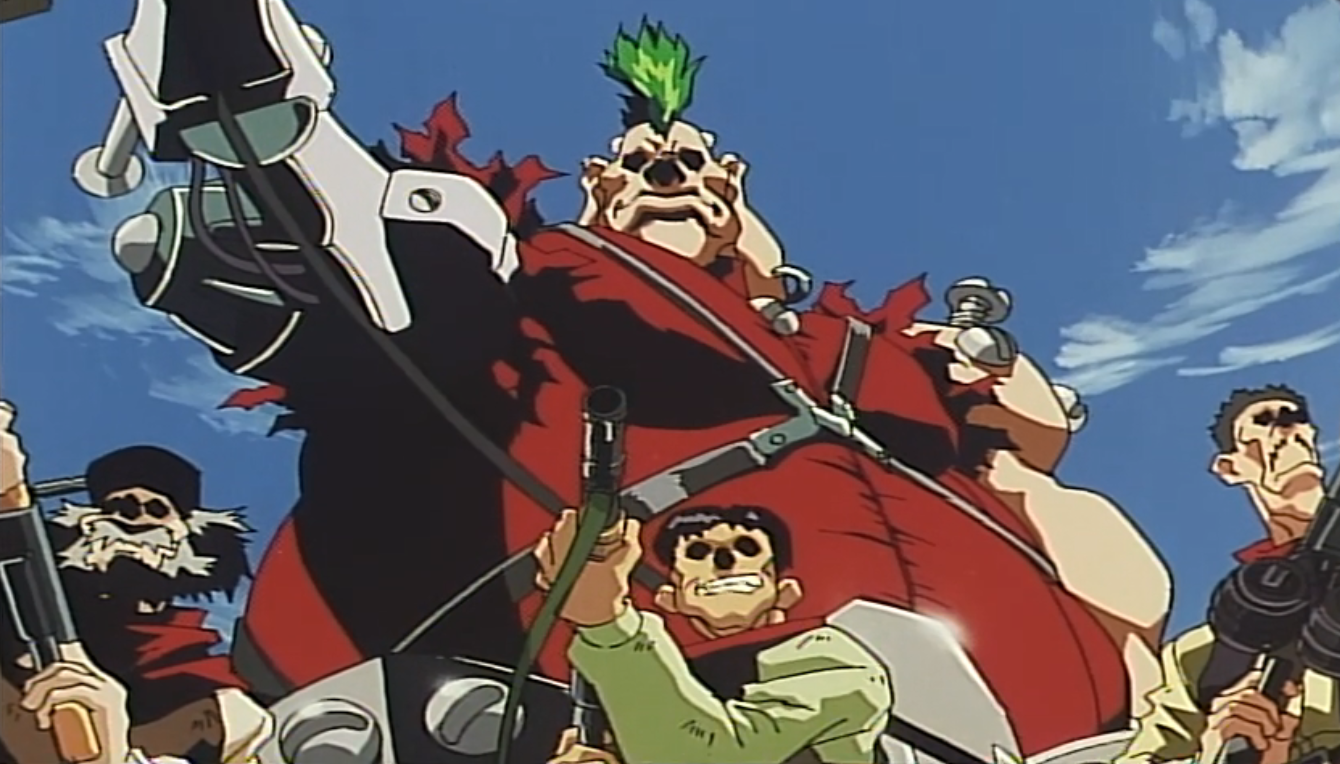 There’s far more money to be made in a world with no rules, where the man with the fastest trigger finger is king.

On the planet of Gunsmoke, the man with the fastest trigger finger is also the most-wanted: Vash the Stampede, an outlaw with a bounty of 60 billion on his head. Low-lives and thugs from the most insane to the most deadly are out for this prize. 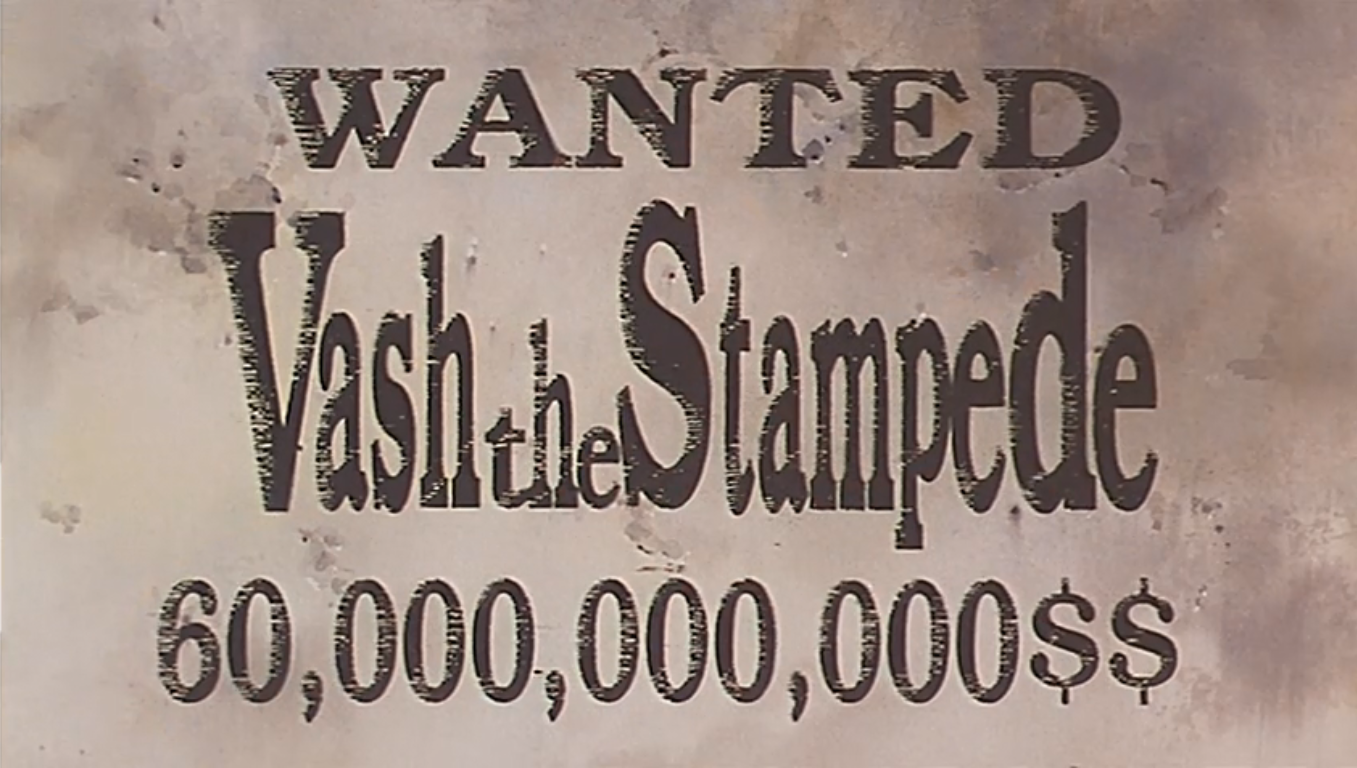 But there are conflicting reports about Vash the Stampede, from his demeanor down to the most basic descriptions of his appearance. No one seems to know who the dangerous devil really is.

All Meryl and Milly know is that their employers at the Bernardelli Insurance Society can’t afford any more insurance claims due to Vash the Stampede’s reign of havoc. The ladies are sent to find Vash and keep his destruction to a minimum. 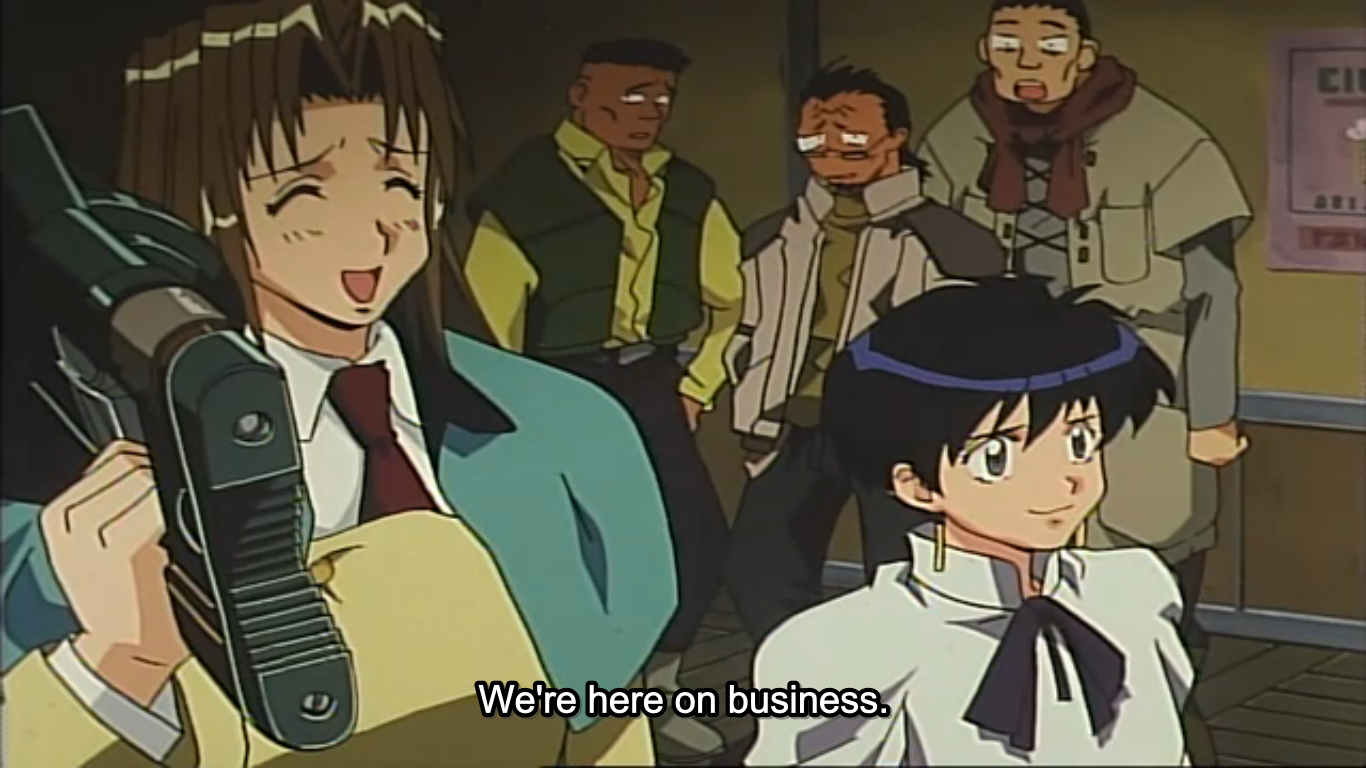 On the way to find the outlaw, Meryl and Milly meet a doughnut-loving yahoo with spiky blonde hair: a real craven who professes he feels faint at the very sight of blood. Unfortunately for the girls, a group of bandits believes this man is Vash the Stampede. The bandits attack on sight, catching the girls in the crossfire. Fortunately, their mystery man is an escape artist extraordinaire and subdues the bandits without firing a single shot. 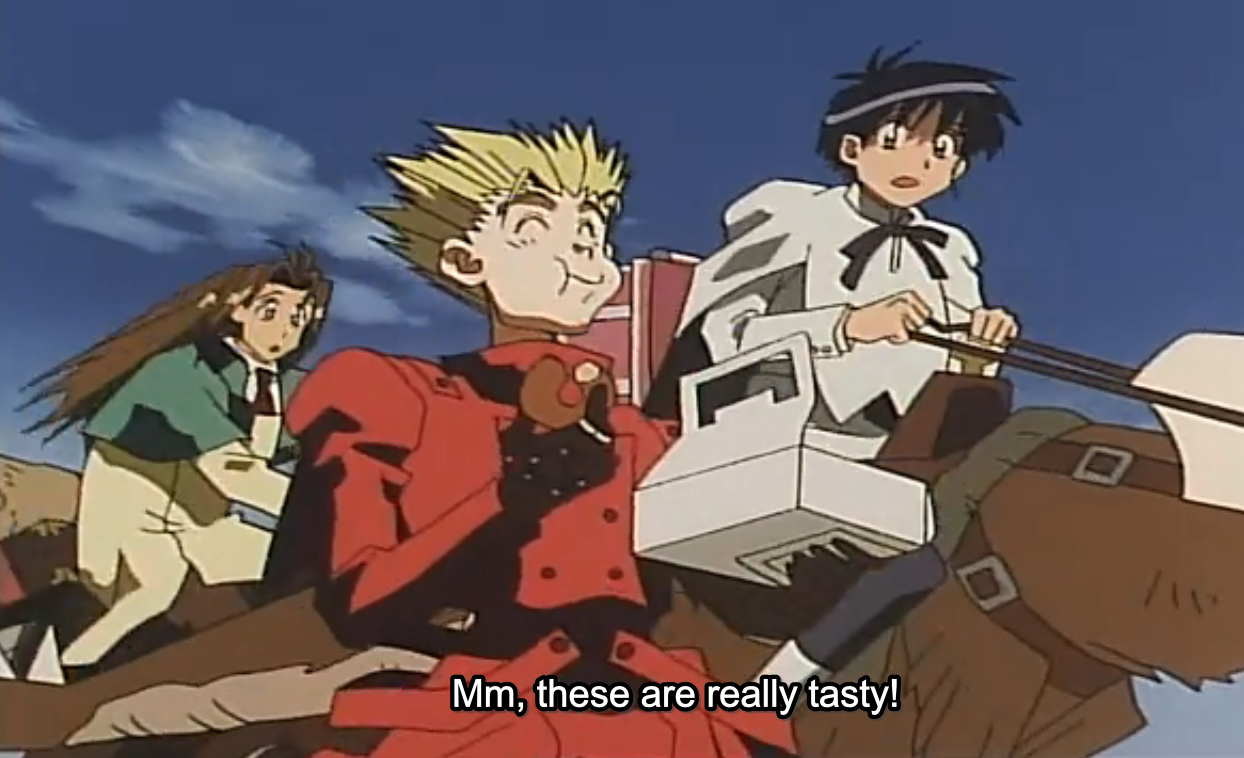 It’s only after four more episodes into the 26-episode anime that we learn that this cowardly, flamboyant, ridiculous, squeamish man-child is in fact the Vash the Stampede... and that the stories have got him all wrong.

Though the animation is dated (unless you have a thing for classic 90’s anime charm) and the pacing may have some issues (episodes 1-4 almost feel like a thug-of-the-week slice-of-life; the overarching plot of the show doesn’t kick in until halfway, and the dramatic backstory episode that reveals how much Vash has suffered isn’t until two-thirds of the way through), to me, Trigun isn’t primarily about the animation or the plot or the insane moves Vash is able to pull off that would make Jason Bourne jealous—

Trigun, to me, has always been about who Vash is. 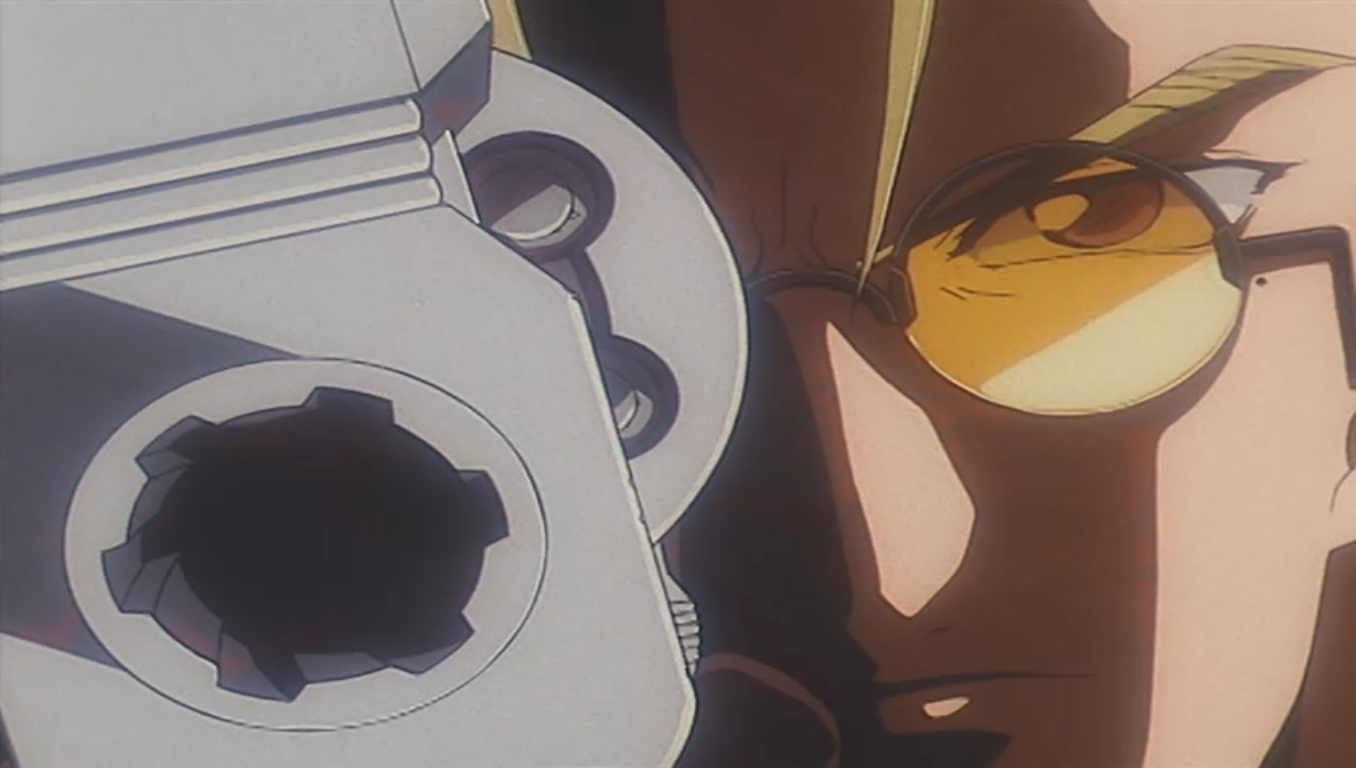 It’s the core question of Trigun’s story, the same question Meryl keeps asking herself and the one the show gets the viewer to wonder from episode 1 until the very end: who is Vash the Stampede?

Who is Vash the Stampede?

Vash is a barrel of delightful contradictions that reveal just what a well-written character he is. He’s flawed, of course, so he’s relatable and funny, and the show doesn’t need to be afraid of portraying him as a goofball, a sappy romantic, or a steel-hearted combatant, because he’s all of these things and then some. One minute he can be a singing drunk hanging out at the bar with the guys; the next minute he’s defending a town from thieves. One minute he can be hitting on the first attractive woman he meets; the next, he’s declining the offers of some prostitutes who want to thank him for rescuing their town.

Vash doesn’t make any sense... unless you watch the show in the order it was carefully paced.

Trigun brilliantly reveals Vash in the same stages as building any relationship with a person would go: it begins by revealing how others view Vash, then reveals what he’s actually like, and finally reveals the deeper intricacies of his character. This way, by the time we see what terrible things Vash is capable of, we know without a doubt who the real Vash is... and we can’t help but root for him to conquer his demons.

This is brilliant pacing. And it’s one of the things I love most about Trigun.

Who They Think He Is

The show begins by presenting who Vash is on the most surface level: the way the world views him. There’s an air of mystery surrounding this unknown gunman. He’s fast. He’s powerful. He’s probably insane. And he’s as destructive as an atom bomb.

Then the lens zooms in a tiny bit more, and we see Vash as a stranger would see him: through the girls’ eyes. To them, he’s a bumbling oaf who doesn’t have much going on upstairs. This leaves the viewer feeling just as confused and uncertain as Meryl and Milly. Surely this coward can’t be Vash the Stampede. He isn’t destructive; he’s harmless.

But as the next few episodes show bit by bit, his bumbling oaf first impression is just due to his carefree nature... the nature he wishes he could enjoy all the time.

Who He Really Is

Vash tries to see the good in all people, but he isn’t afraid to fight those who would hurt others, which is what he deems the ultimate sin. Many of the villains who encounter Vash emerge profoundly changed from the encounter; even those who feel they had no choice but crime learn that it’s never too late to do what’s right.

And it’s once you see the good within Vash, despite his moments of carefree bliss (episodes 1-4), that you begin to see another side to him, a side that is equally as true as his delight for the little things in life or his drive to better others: his skill and dangerous abilities, which he willfully harnesses to use for good.

The Danger Lying Beneath

In episode five, we’re introduced to a particularly destructive villain, one of the most dangerous and unhinged we’ve seen in the series so far. Whereas others were normally just bank-robbers or low-level thugs, this guy is certified insane. Professor Nebraska has no regard for human life and actually seems to get some pleasure out of watching innocent civilians scramble around like cockroaches as he and his gigantic cyborg son rampage through town, destroying everything in their wake as they hunt for Vash the Stampede.

Vash spends the first half of the episode fleeing the people of the town and the giant monster they’ve sicced on him. But when Nebraska turns to some underhanded tricks to lure out Vash—willfully threatening innocent lives—Vash immediately comes out of hiding to risk his own skin and save the very people who had put a gun to his head earlier. 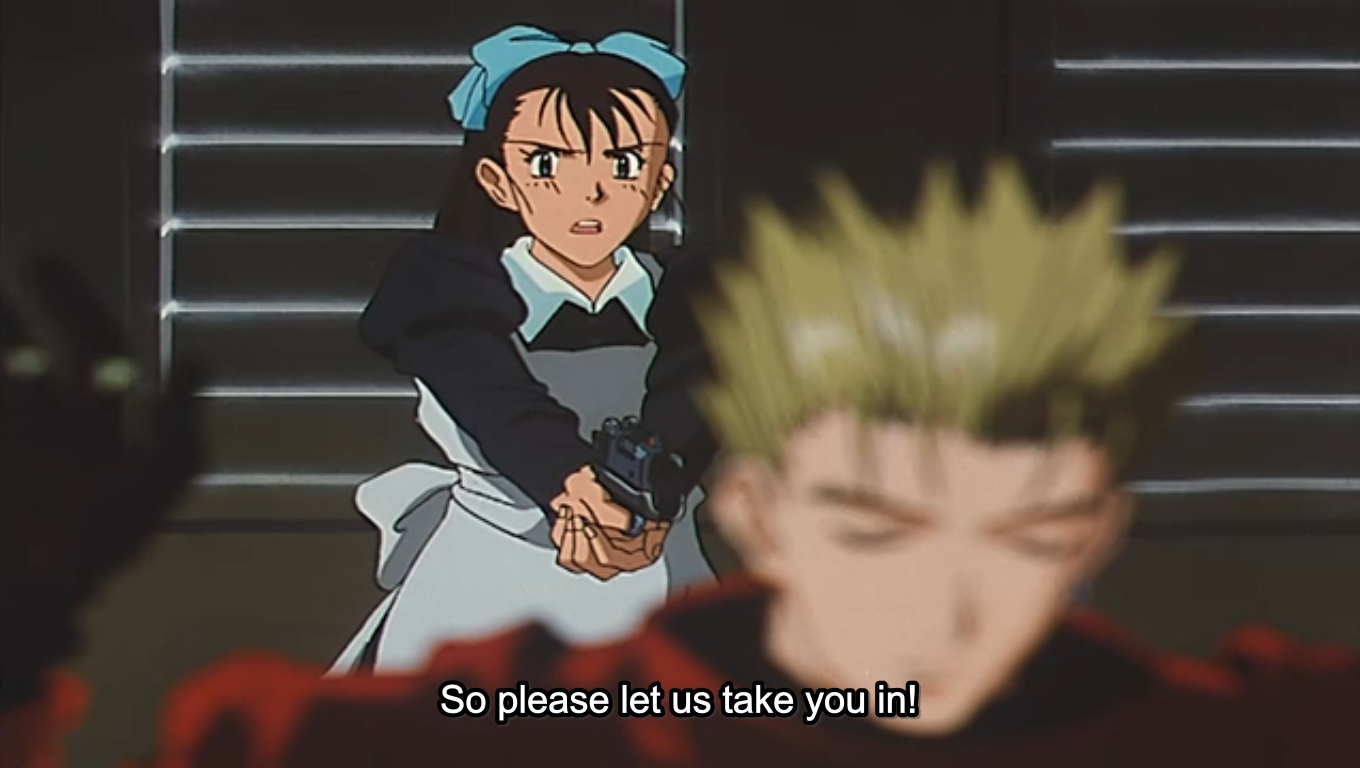 And this moment is the first time we see Vash use his gun. This show never demonizes guns, but up until this point, most weapons have been used by the wrong people to cause harm or threaten others. And it’s clear that Vash’s gun in particular is a symbol of his strength and potentially destructive force. But Vash doesn’t even use it to kill the bad guys. Rather than going for a killing blow, he merely shoots to divert the professor’s mad weapon, his own son’s mechanized fist, away from the people the villains are about to crush. 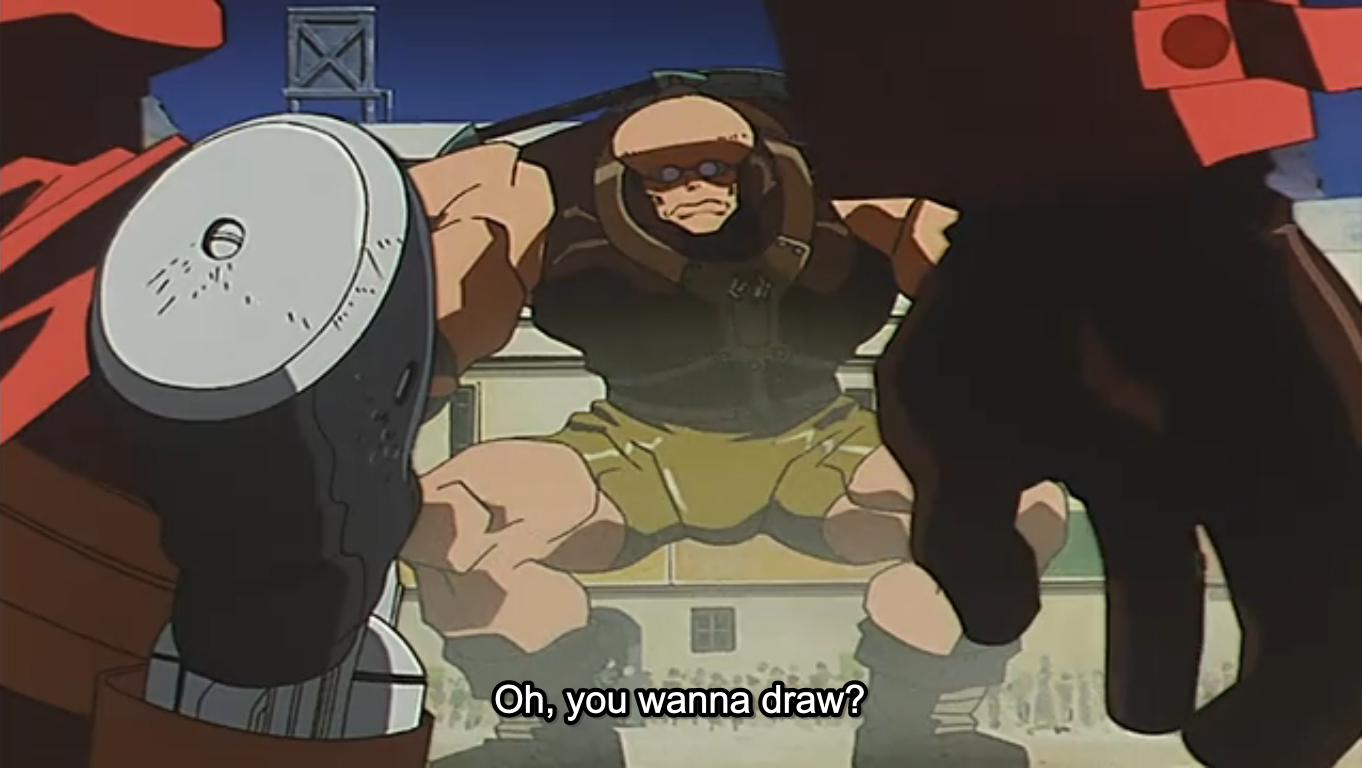 This is our first glimpse into Vash’s power.

It’s clear that this power can be used for the wrong reasons; we see examples of strength and force being used by the wrong people for the wrong reasons in every episode. But if we hadn’t seen Vash for the goofy and fun-loving person he is before, we might have been tempted to think he was just as dangerous as the other gun-slinging riffraff we’ve seen throughout the show.

But because we’ve seen who he really is... we know that’s not the case. We know that this hero is the real Vash. And so we can marvel in awe as Milly cheers him on for having rescued the town from Professor Nebraska using only six bullets. 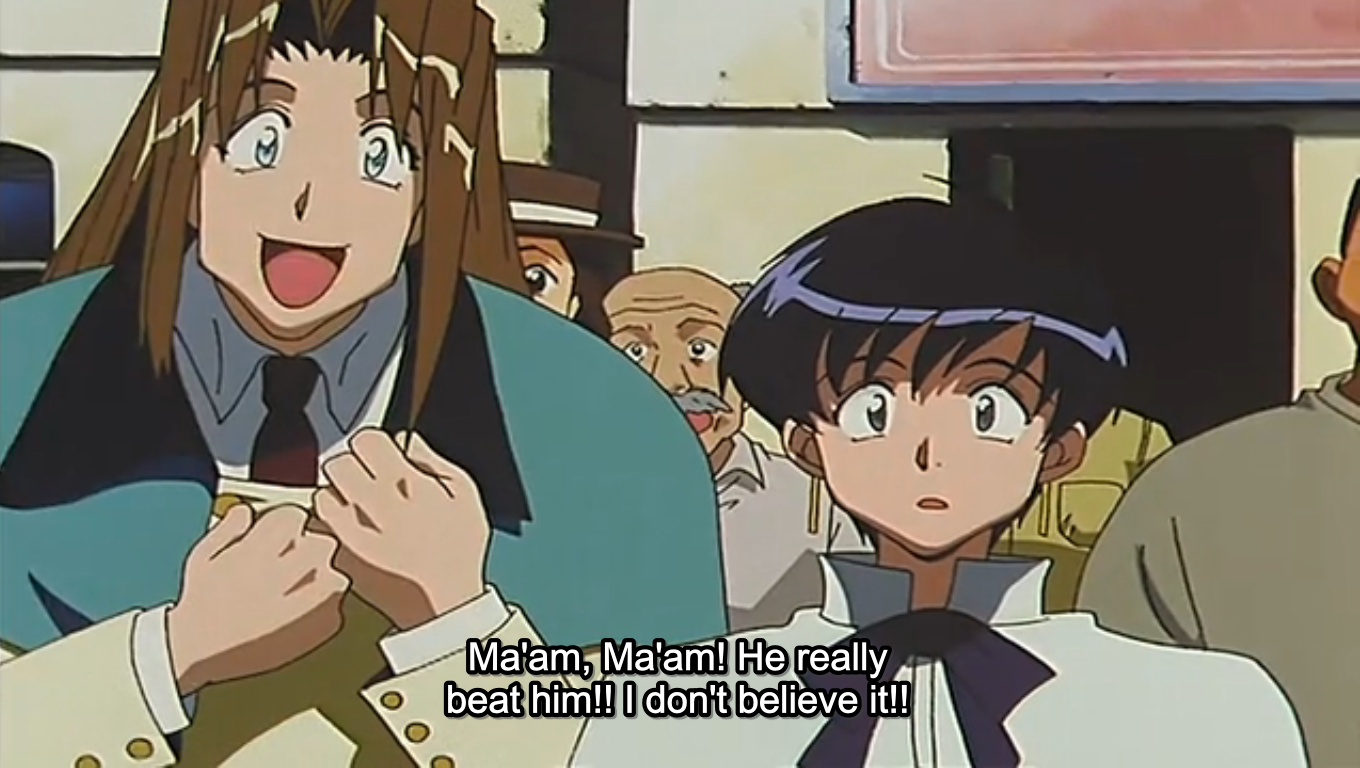 Who He Fears He Is

Now that we’ve come to love Vash, we can start to gain a better appreciation for his struggles. The later episodes of the show begin to challenge Vash by forcing him to confront his demons and his frustrating limitations. And as Vash agonizes over terrible decisions he’s forced to make, we agonize too, because we know how painful these decisions are for him. We know who Vash is and what his values are. We know what a gentle soul he is and wants to remain, despite the overwhelming power of destruction he has at his fingertips. We know this duality is tearing him up inside, because at the end of the day, Vash is struggling the whole series with the question:

“Who is Vash the Stampede?” 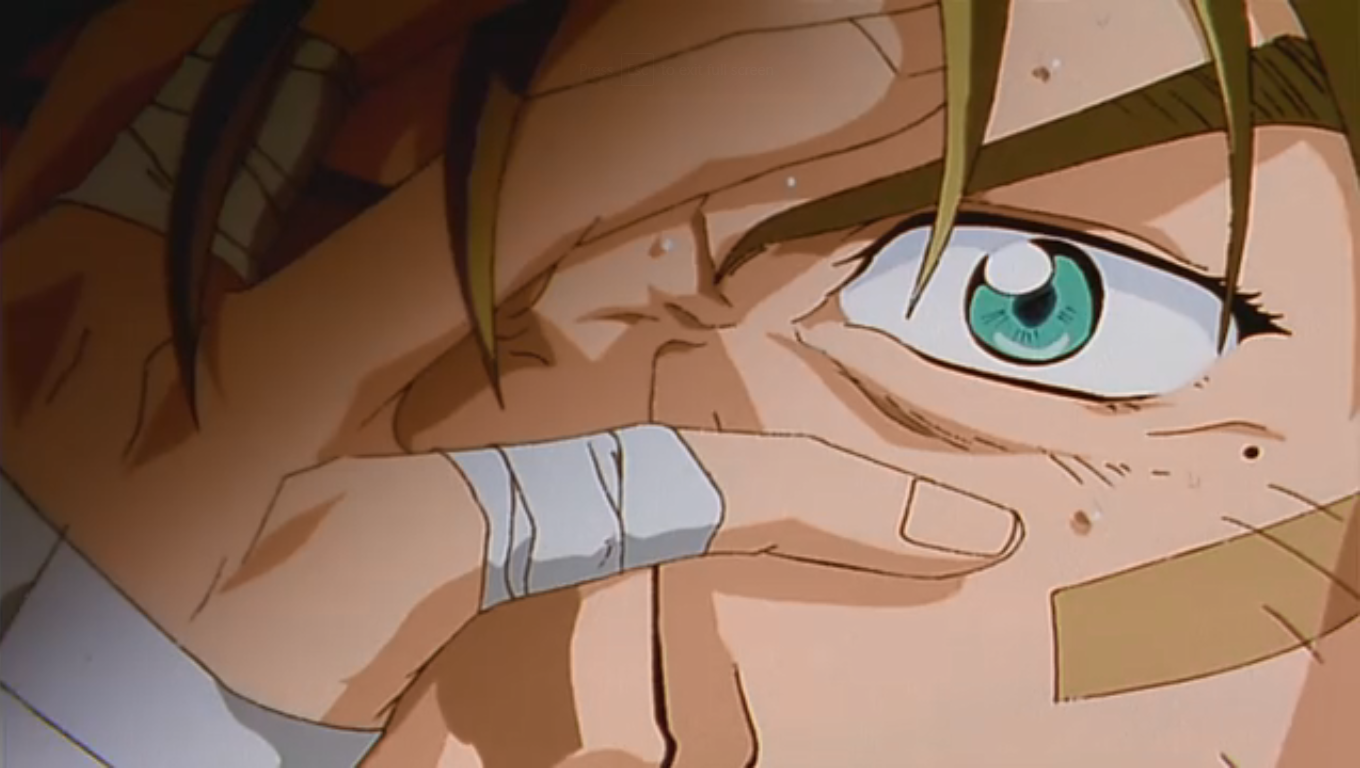 He agonizes when he’s confronted with his deepest fear: that the answer is he’s a monster, a killing machine. We see this most clearly of all when Vash performs an act so destructive that it surely confirms who he is... and he runs from everything he ever was, trying to assume a new identity and a new life to escape it.

Who He Fights to Be

We don’t find out the full extent of why this potential for destruction bothers Vash so much until later in the series (episode 17 of 26), but we know why long before this point. It’s because hurting people is so diametrically opposed to everything Vash is and everything he values. He sees beauty in the world worth fighting for, so the fact that he could be one of the main things threatening that beauty haunts him.

But Vash learns—through his experiences and through the girls’ persistent following and a priest’s incessant meddling—that he can’t run from parts of himself that frighten him... because there are people out there who need his quiet, forceful strength. There are evils out there that must be stopped, because they won’t stop unless strength meets strength.

I love Trigun because I love Vash and everything he teaches. And that never would’ve come across without the show’s conscious pacing, revealing Vash piece by fascinating piece.

---
All photos are screenshots taken from Crunchyroll and are used under US “Fair Use” laws. Trigun property of Funimation. And I am not affiliated with either of them.