Some characters are so well-written that they seem life-like. But how would these realistic characters stand up to real-life personality typing?

It’s time to put the Enneagram back to the test by gauging characters’ personality types based on their core drives and greatest fears.

The remainder of this post will contain some spoilers for 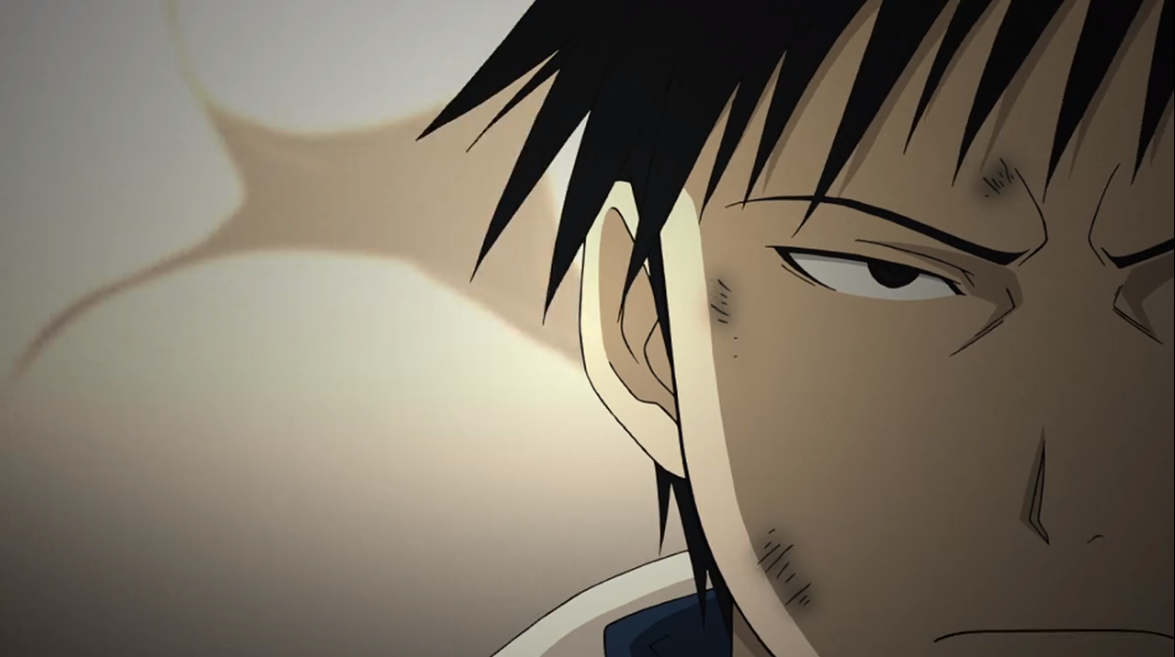 “The power of one person does not amount to much. As such, I will do all I can, however little that may be, to protect those who are dear to me. Those below me will protect those below them. We tiny humans should be able to do that much, at least...”

“Which means... In order for you to protect the whole country, you’ll have to be standing at the top of the pyramid.”

“I’ll bet it feels awfully good to be there, Hughes.”1 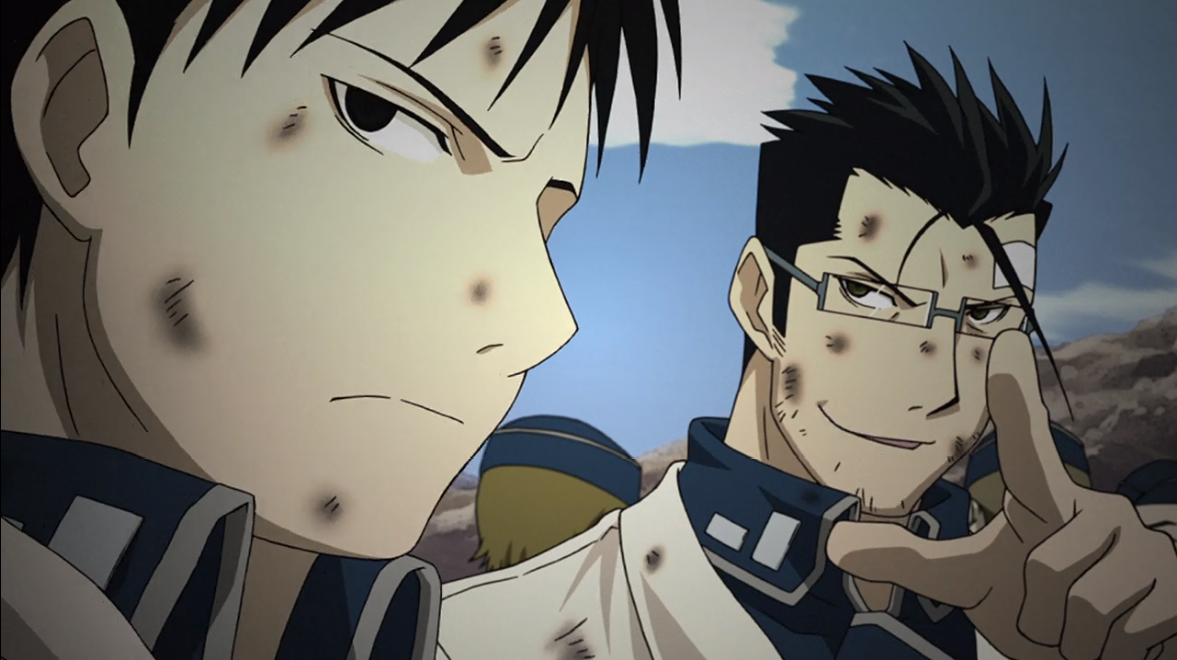 Roy Mustang is a man of many faces: irritating boss to the impulsive state alchemist Ed Elric, confidante of Lt. Colonel Maes Hughes, center of the world to sharpshooter Riza Hawkeye. Roy Mustang garners respect from some... and loathing from those who incorrectly think they know the real Roy.

Type Threes are called “The Achievers.” And hearing that, those of you familiar with Fullmetal Alchemist are probably already nodding in agreement; there’s nobody more ambitious in the FMA universe than Roy Mustang. 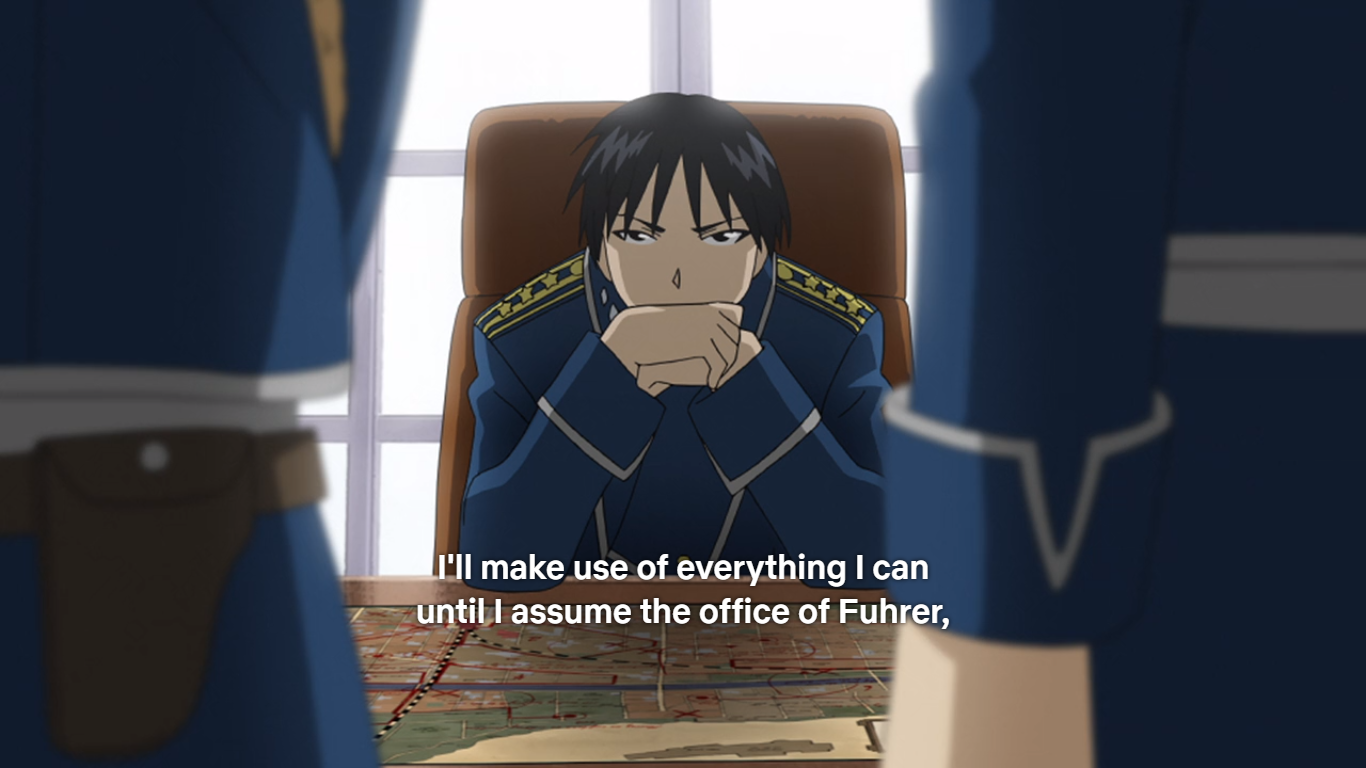 Determined to become the leader of Amestris, Roy will do anything to achieve his goals. As is typical of Threes, he works himself to the bone,2 often falling asleep at his desk due to how hard he’s pushing himself (and his subordinates). 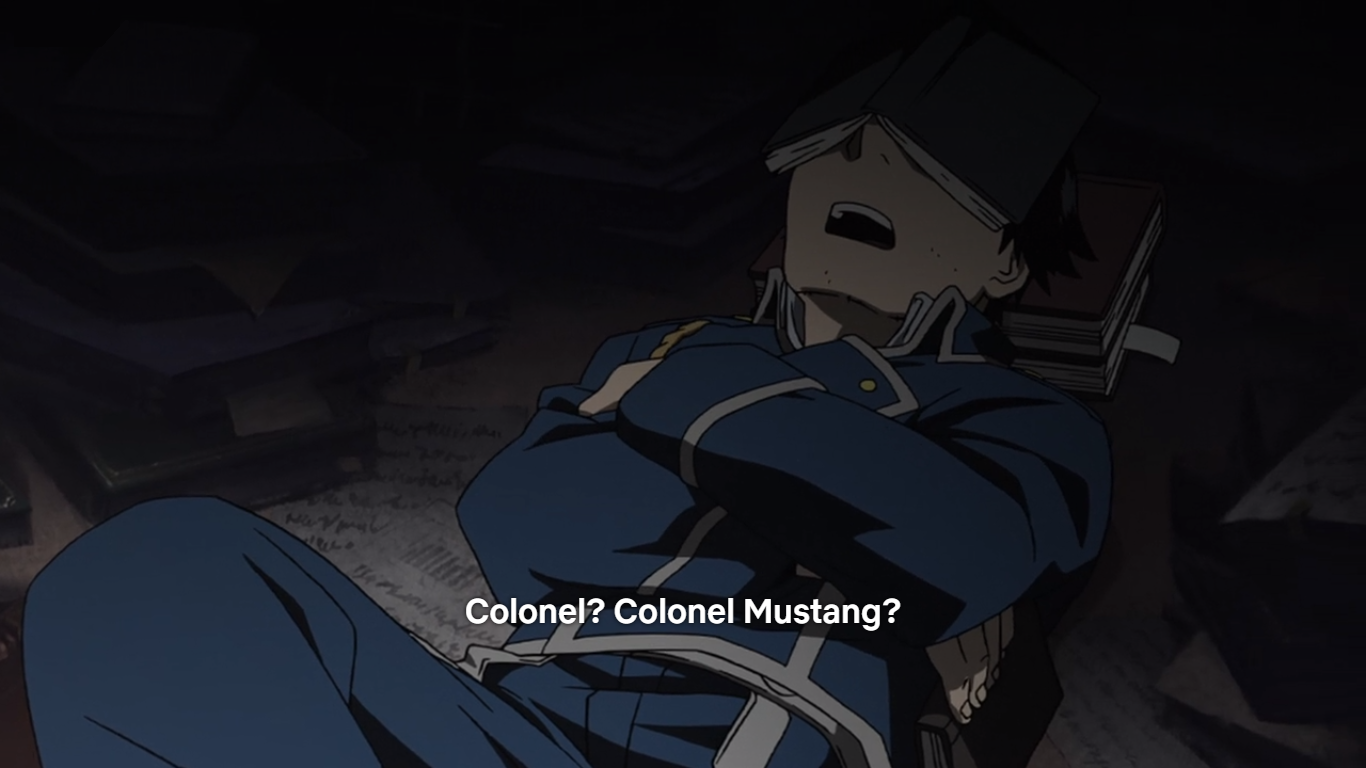 Threes are all about achieving success, however their culture might define it.3 To Roy, success means ruling the country so he can right the injustices and atrocities he saw—and perpetuated—during the Ishvalan War of Extermination. He sees ruling the country both as a way to redeem himself (or condemn himself, as his lieutenant, Riza, points out)4 and to protect others from being harmed via war again.

With this in mind, Roy has become the pinnacle of a good soldier while positioning himself to climb the political ladder. This is typical Three behavior: “Threes learn to perform in ways that will garner them praise and positive attention... learn[ing] how to cultivate and develop whatever about them is attractive or potentially impressive.”5 And Roy’s been hard at work at that. He’s “diplomatic and poised.”6 He almost always retains his cool, keeping the hot-headed Ed Elric in check with his straight-talking diplomacy. He’s “self-assured, attractive, and charming,”7 so charismatic he’s gained a reputation as a womanizer.

But this is all some see when they look at Roy: a dangerously ambitious go-getter who has a penchant for hitting on women. But that’s hardly Roy’s true face.

Roy wears a myriad of masks in order to achieve his goals. If he needs to seem like a womanizing scumbag, he’ll do it. If he feels he needs to be brutal, he’ll be brutal. Outsiders might see these masks and assume the Three is a naturally disingenuous person, and to some degree, they are correct; Threes often struggle to understand who they really are and what they truly want, since success defined by others will only satisfy them for so long.

Many Threes discover they’ve spent their whole lives adapting to how others define success... and thus don’t know what they want out of life.8

But Roy doesn’t struggle with this Type-Three pitfall. Why? Perhaps because of his upbringing. Whereas many Threes are told “[a]t a young age... that they [are] not allowed to have feelings and be themselves,”9 Roy was surrounded by emotionally healthy individuals who encouraged him to chart his own path. His foster mother, a caring and street-smart woman, continues to support his dreams, even at the risk of her life and the wellbeing of her business.10 His mentor, Riza’s father, supported and tutored Roy in flame alchemy; the two were so close that Riza’s father had no qualms criticizing Roy if he thought the young man had lost his way.11 Even the horrors of the Ishvalan War forced Roy to evaluate what really mattered. All these elements taught Roy to self-reflect and attune himself with his “inner core.”12 He knows who he is and what he truly wants: to protect people and do it justly.

Roy does, however, fall prey to a second struggle for Threes: the blessing/curse of compartmentalizing emotions. It allows Threes to achieve greatness... and lose touch with their inner humanity. “Threes... ‘put their feelings in a box’ so that they can get ahead... Threes have come to believe that emotions get in the way of their performance, so they substitute thinking and practical action for feelings.”13 We can see this in action as Roy puts aside his feelings and sometimes even his basic physical needs (again, his lack of sleep) to get things done.

Although this quality enables Roy to do great things, it’s a double-edged sword: after all, it led to him killing Ishvalans during the war, a crime that still haunts him and Hawkeye to this day.14 It also leaves him more susceptible to his emotions taking over, especially when he thinks it’s his goals driving him. For instance, when Roy investigates a friend’s murder, he doggedly works until he finds the culprit... and nearly loses his humanity to his overwhelming rage.

To achieve what he wants, Roy has to manipulate how others perceive him... which leads to another Three pitfall: being “overly concerned with [his] image and what others think of [him].”15

Threes thrive on affirmation more than any other personality type because they fear they are worthless. This fear ultimately drives Roy’s every action and frustration. Look at how he responds when he’s at his lowest point. 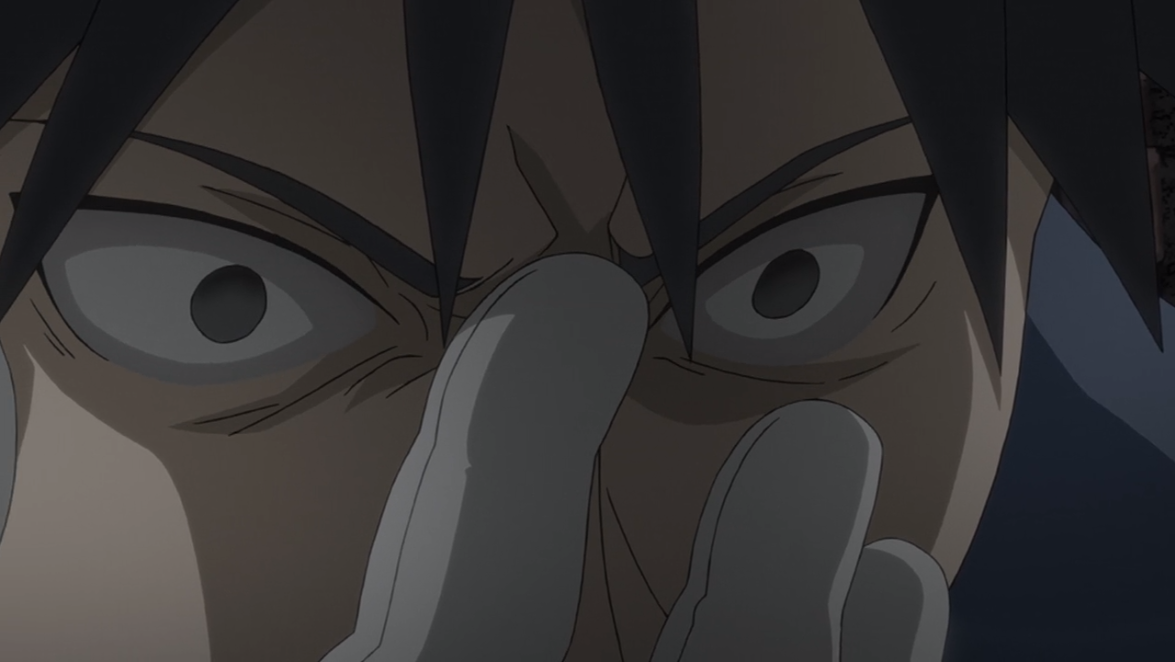 Robbed of the use of his eyes, his alchemy is useless. He’s thrown around like a ragdoll, forced to listen as others try their hardest to defeat an impossibly powerful enemy while relying on someone else to guide him to safety. He’d only be a burden. Injured and shaking, all Roy can say is, “Sorry. I didn’t expect to be so useless at such a critical time.”16

To an outside observer, this would seem like nothing more than an off-hand comment. But for Roy, who needs to be needed, feeling this sense of worthlessness kills him.

Riza has always told him he’s “useless” in the rain,17 and it’s clear from his reaction in this scene that to some degree, Roy has always believed—and feared—that it’s not his alchemy that’s worthless... it’s him.

But this moment also proves what a strong, developed Three Roy is. This moment of raw honesty is exactly what a Three needs; they can’t grow until they express their “genuine feelings and needs.”18

So how does Roy overcome this insecurity and the very real weakness of suddenly becoming blind? By turning to others to help him overcome his flaws. Immediately after this scene, Roy turns to Riza, willingly and eagerly relying on her to be his eyes. 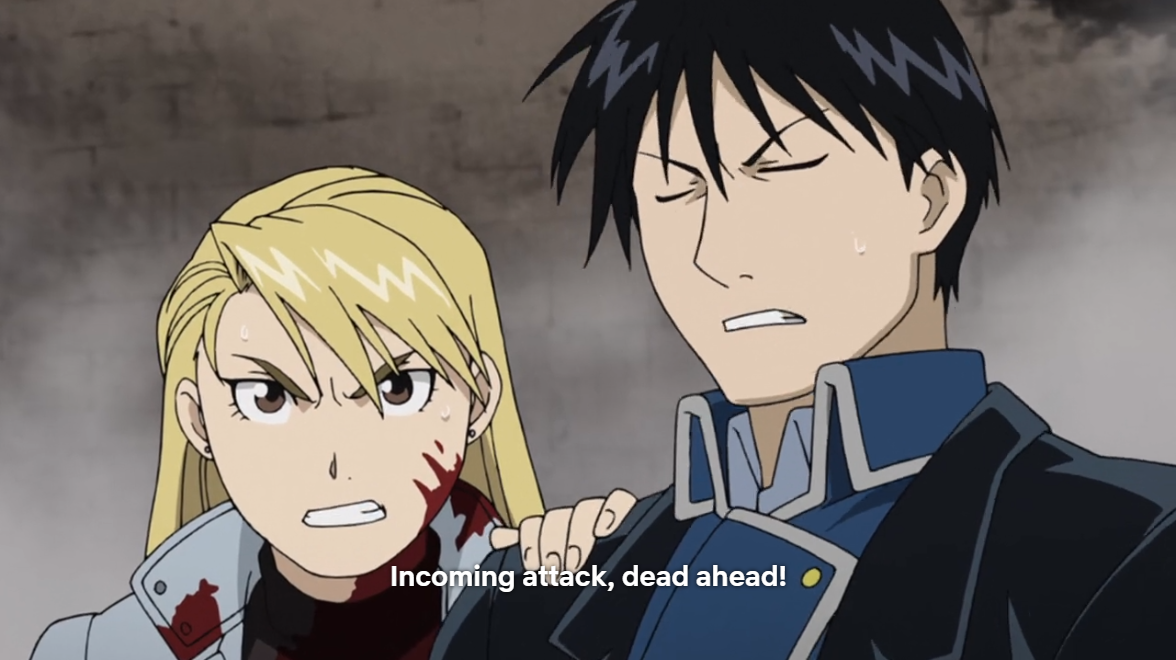 Riza brings out the best in Roy. Together they overcome the pitfalls a Three-One relationship can fall into: while some Threes may find Ones’ principles annoying and inconvenient,19 Roy is willing to let Riza guide him. He respects and trusts her moral compass so deeply that he willingly lets her make the call should he go too far. 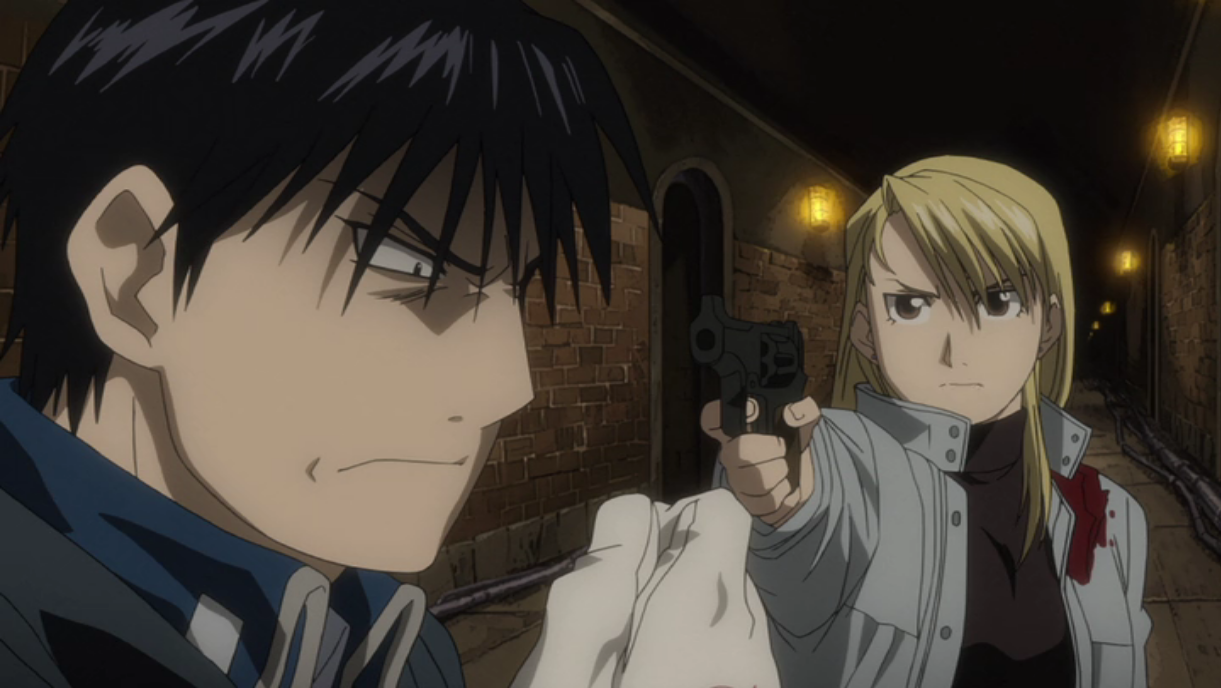 Even when Roy finds himself on the brink, Riza’s love brings him back. Because what he can’t stand most is hurting his “dear lieutenant.”20 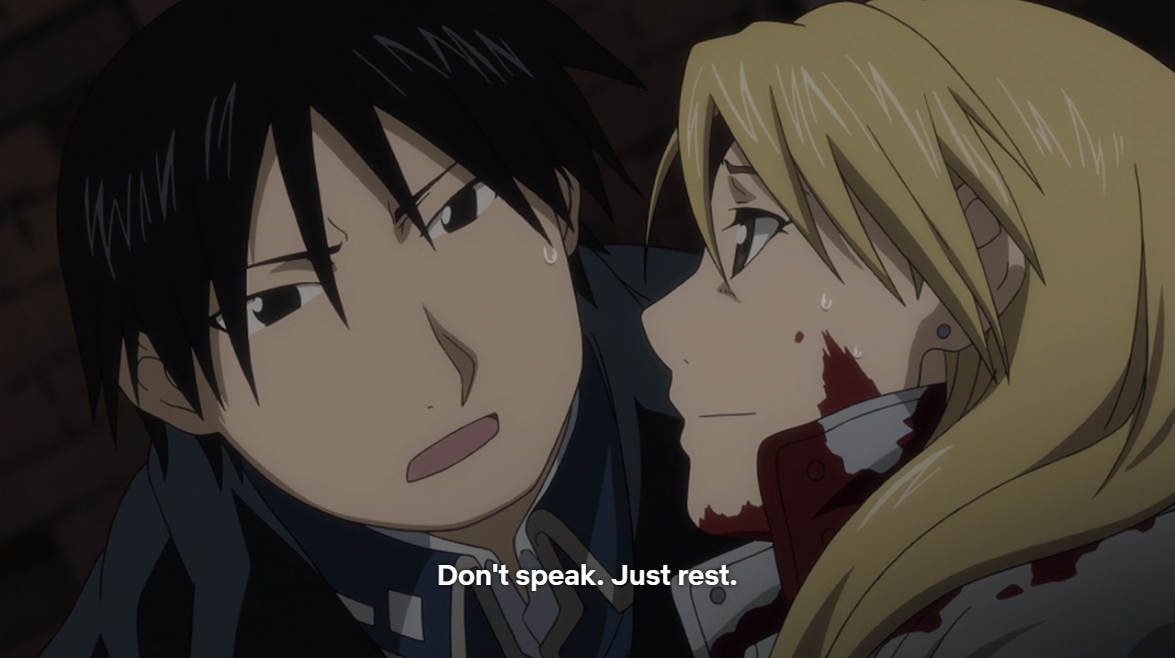 Riza balances his weaknesses, holding Roy accountable when he becomes so focused on the goal that he loses sight of what it means to get there. Riza also serves as a constant visual reminder of Roy’s true goal and deepest desire: not to rule, but to lead; not to lord over others, but to protect them in ways that the current leader has failed to do.

So although Roy may seem like a man of many masks—a charming politician rising through the ranks to become ruler of all—he’s far more. Because he’s taken time to focus on what really matters and kept himself surrounded by people who will drive him to do the right thing in the right way, Roy exhibits qualities of the healthiest Three: 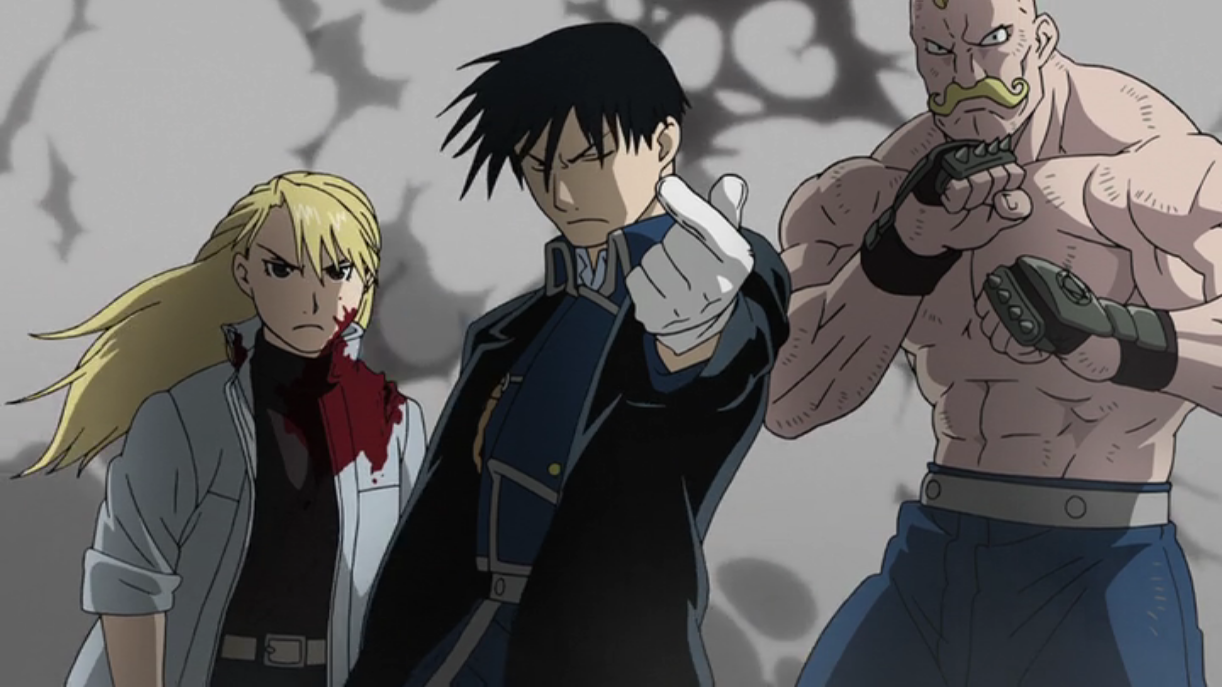 “Self-accepting, inner-directed, and authentic, everything they seem to be... [S]elf-deprecatory humor and a fullness of heart emerge. Gentle and benevolent... Self-assured, energetic, and competent with high self-esteem: they believe in themselves and their own value. Adaptable, desirable, charming, and gracious.”21

By the end of the show, Roy has turned away from his ugliest inner monster and faced his deepest fears. He’s become the self-sacrificing man he needs to be to lead the country into a new era of peace.

---
Notes and References:
All photos are screenshots taken off Netflix and are the property of Aniplex of America 2009-2010. Used under US "Fair Use" laws.

Colonel Roy Mustang, Riza Hawkeye, Fullmetal Alchemist: Brotherhood and all related terms are the property of Aniplex of America. And I am not affiliated with them.