How Your Lie in April Impacted My Life... and How It Can Impact Yours


Your Lie in April was one of those shows I’d heard people praising, but I didn’t check it out right away. Going in, I only had a general idea of what it was about: musicians, a young love story, etc.

I had no idea how deeply this story would impact me.

Your Lie in April is indeed about musicians and a young love story. But it’s so much more than that. It’s a show about life. It’s a show about loss and perseverance. It’s about finding your passion and, in many ways, finding who you are, even when you might not like it. It’s about coming to terms with how you were designed and what you were made to do. And it’s about the beauty that unfolds when you finally step into that.

Unlike most shows I watch, there’s no overarching villain in Your Lie in April. Actually, the enemy here is much more terrifying and relatable... it’s fear.

Your Lie in April highlights how devastating fear is in all our lives, no matter what obstacles we face. The characters don’t beat their fears in a 22-minute episode. Far from it. It takes the entire show for the protagonist Kousei to start tackling his fears, step by painful step.

Having struggled with anxiety and panic attacks, I’m intimately acquainted with fear. You can’t just tell fear to go away. It’s not something to scoff at.

This show dares to portray fear and anxiety with raw honesty, including all the shame and self-loathing that so often accompanies it. Fear feels like a monster living inside us, and Your Lie in April portrays that perfectly.

Kousei struggles with fear, embodied by his image of his mother. When she was alive, she was incredibly strict and even abusive at times. Whenever Kousei tries to play piano, he feels like his mother is watching him, judging him, telling him he’s not good enough. This anxiety paralyzes him to the point where he can’t even hear the notes he’s playing.

Just like this ghostly image of his mother, Kousei’s anxiety haunts him, beating him down every time he tries to play music. He freezes up. He can’t do it.

Fear makes him give up. He abandons his public piano-playing: no more concerts, no more competitions. His piano books at home collect dust, and a part of him dies. In fact, he’s actively trying to kill it, avoiding the classical music that was once such a beautiful part of his life.

Kousei is scared of feeling trapped, of being left alone, of failing.

And those are the same fears I’ve struggled with since college.

My life plans fell apart after graduating. I was (and am) one of the many post-college undergraduates who couldn’t seem to get a full-time job. I endured rejection after rejection in the form of “No’s” from dozens of positions. I finally gave up trying to find a job in the field I’d planned on going into. There just weren’t any jobs for people with no previous professional experience.

I was fresh out of college; of course I had no experience.

“Frustrated” wasn’t close to expressing how trapped and betrayed I felt.

I’d done everything right. I’d checked all the boxes. I’d gone to school, stuck it out, worked my butt off for my good grades. Yet after fifteen years, I had nothing to show for it.

I felt directionless; what was I supposed to do now? And worse, I felt helpless to change my situation.

Apparently I had no useful talents or skills; the job market certainly said as much. Maybe all I was good for was working dead-end jobs.

I’d dreamt of being a writer since I was eight or nine years old. But without any “real work,” how could I even afford to spend time writing?

My plans had been smashed to pieces. My hope was sputtering out. Now I felt my dreams were slipping away too. And slowly my world started to lose color. Just like Kousei’s.

From Kousei’s point of view, the world has little color. Many of the backgrounds are muted or even completely black and white. The color pallet is indicative of what’s going on inside him. Nothing excites him. Nothing thrills him. He’s just going through the motions: existing, not living.

I didn’t even realize how monochrome my world had become until I started watching Your Lie in April.

This may not have been a show about a writer, but it was a show about me. Kousei’s struggle with failure, anxiety, depression, pain, and loss resonated with me. Every time Kousei’s fingers would freeze on the keys, every time he sat in horror knowing others were judging him... that was me. When Kousei tries to walk away from music, leaving his piano to literally collect dust... I knew I was one step away from that same future, forced to watch my dream trickle through my fingers.

After all, I figured, I probably wasn’t any good at writing.

After all, I thought, everyone would probably just criticize me.

After all, I felt, I’d never have what it took to really succeed.

There was just one problem... writing was a part of me. No matter how hard it had gotten, no matter how many times I failed at everything else, I had to keep writing. I couldn’t let it go.

In the same way, Kousei tries his hardest to walk away from music, but he can’t escape it. Music is a part of him; he’s a musician, an artist. He has to perform. He can’t leave it behind; that leaves him feeling dead inside.

All it takes is a couple nudges from people who care about him to open his eyes.

Because when Kousei meets Kaori, everything changes. 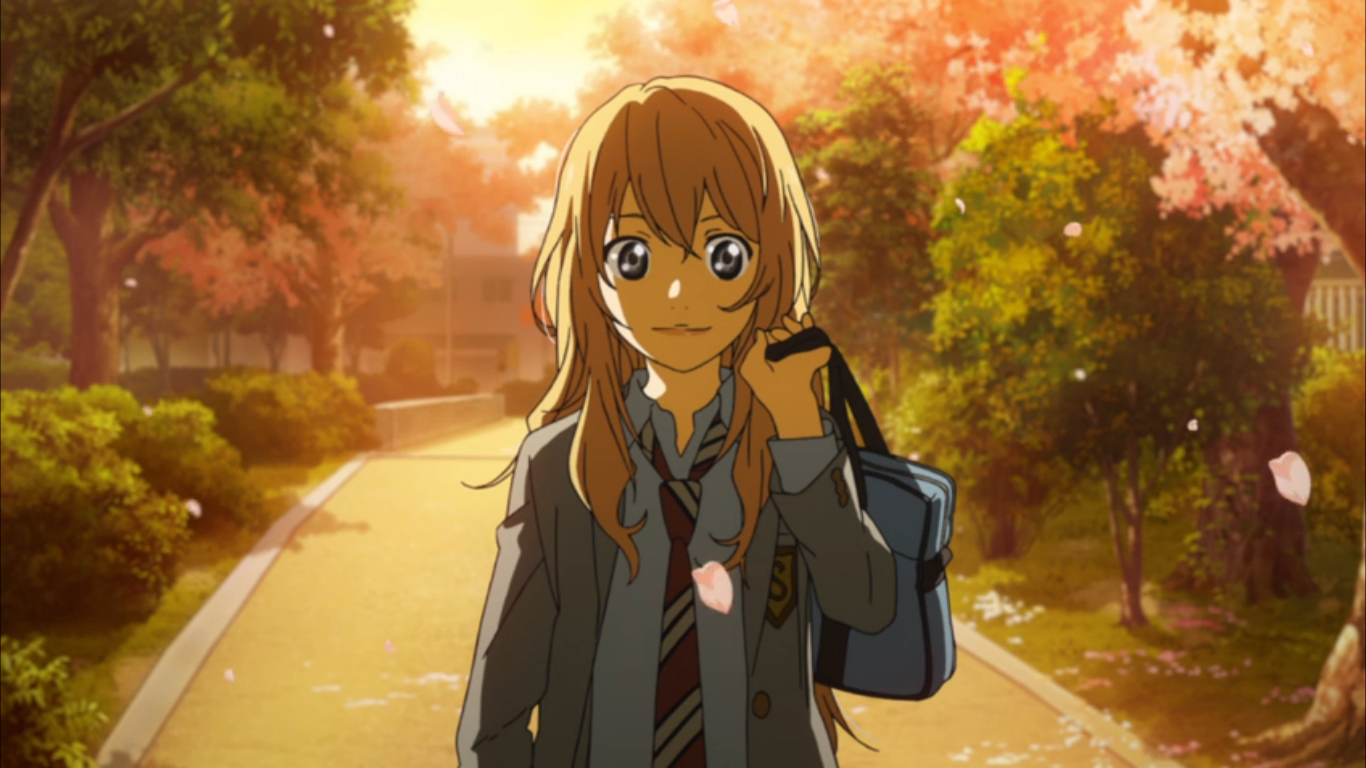 Kaori reminds Kousei to live. That some things are worth fighting for, even if it takes every bit of ourselves. That even when we pour out every part of us, sometimes that’s exactly what we need to grab hold of a much-needed victory... even if that technically ends in defeat.

Because the people who don’t win aren’t necessarily the ones who lose.

Seeing Kousei and Kaori face fear head-on, no matter how things turn out, reminded me that we only truly fail when we give up.

When Kousei learns to accept music and return to it, a bit of color returns to his life. Bit by bit, Kousei learns to fight his fears and open his heart—to show the world what he can do as a musician and to let others into his world.

So now I’m going to tell you what Your Lie in April told me:

Stick to your passions. Figure out what you were designed to do and do it, no matter how hard it is. Keep fighting.

But why bother? You may wonder. How can I when it’s such a struggle? You don’t understand how difficult it is. You don’t know what I’ve already been through, and with no results to show for it.

But I believe in you. 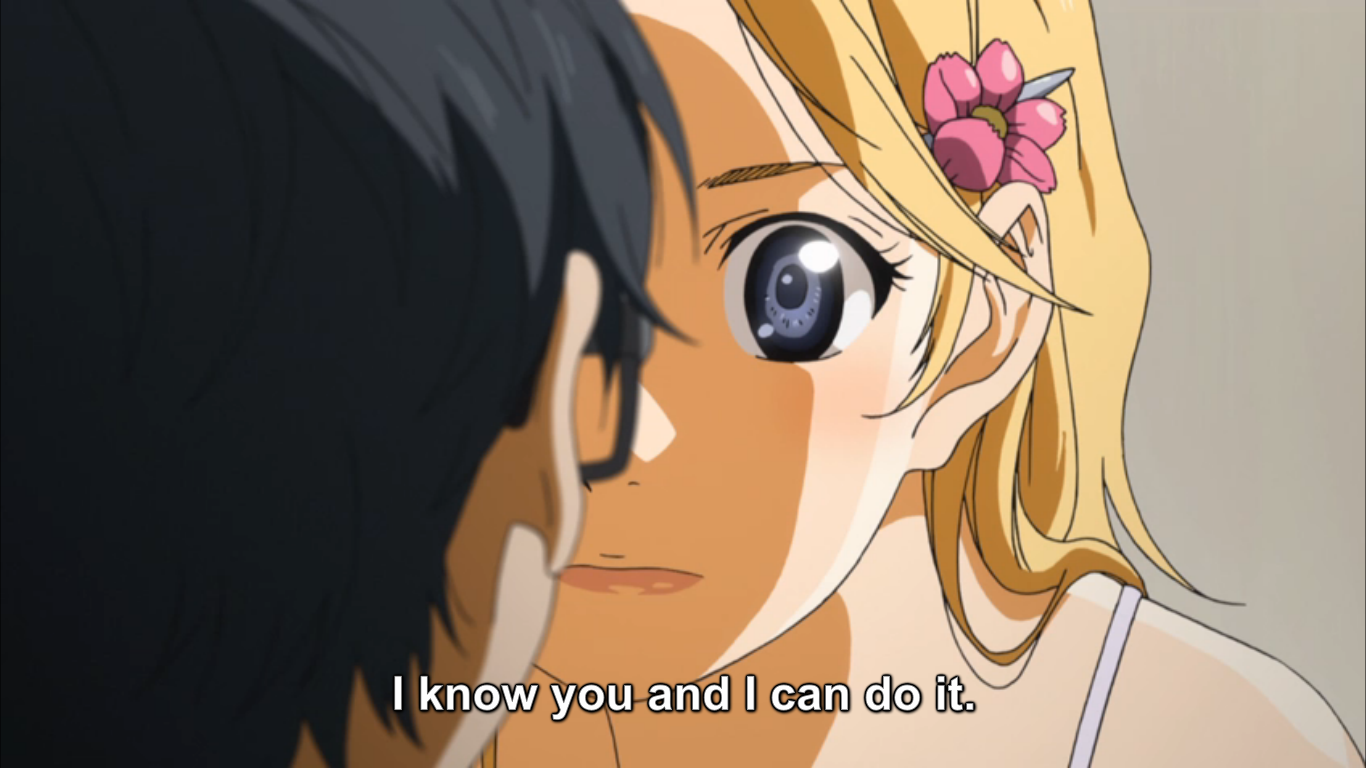 Everyone is built to do good things in this world. There are going to be people out there who need you to do what only YOU can do.

If you don’t, no one else will. We’re all counting on you. We need you.

If you’re struggling to remember what’s worth fighting for, give this show a watch. If you’re feeling like your dreams are slipping away or that you’re at a dead-end in life, watch this show. You may just walk away with a fresh appreciation for what matters... and with a rekindled desire to chart the course of your life, even if it’s just one small step at a time.

Though I will say: this show is not for you if you’re struggling with an illness. For the rest of you, prepare your feels.

---
All photos property of their respective owners and used under US "Fair Use" laws. Unless otherwise specified, all are from Crunchyroll.com.

Your Lie in April and all related names and terms are the property of Aniplex of America.