This is one scene I am incredibly sorry to see go, despite its intense content. This was initially the spark that served to set Jaranin off on his adventure... one that set the stakes for what will happen to his home should he fail.

Violence Advisory: This scene will contain dead bodies and implied acts of extreme violence and war. Discretion is advised.

---
[After Kerlonkus kidnaps Isalaina, Jaranin tracks them down. As the fight between the two boys comes to a head, Elun rides in to break it up and save both Jaranin and Isalaina, scolding Jaranin for his reckless behavior, getting into a fight he can't win. Better to run away, Elun says.

Kerlonkus is hot on their trail, so the three ride higher and higher into the mountains, chased by Kerlonkus's mad obsession. But the children have been taught all their lives that the mountains are treacherous... and they'll soon find out why.]

Sensing their riders’ urgency, Firebrand and the other unicorns scrambled up the rocky hill to shimmy behind two large boulders that jutted from the earth. The rocks' sandy faces were large enough to hide a unicorn and rider behind.

Once behind one of the rocks, Jaranin dismounted and glanced around the boulder. Beside him was what looked to be a rugged path hewn into the mountain that went further up, and beyond the path sat Isalaina and Elun behind a larger boulder.

Twenty yards beneath them, Kerlonkus came galloping in. His mount had slowed by now, and he edged closer to the place just under Jaranin and his friends.

He’s going to find us! Jaranin threw himself behind the rock but was unsure what to do. Kerlonkus was coming, and if any of them moved from their position, they’d be spotted for sure. There was no way to know what Kerlonkus would do once he saw them. He was acting raving mad. All his animosity toward Jaranin had finally reached its peak.

As the hoofbeats tramped closer, Jaranin mounted Brand again. At the very least, they could make a faster escape while still mounted. Perhaps he could distract Kerlonkus and grant Isalaina and Elun time to escape. He glanced across the path to see that they had both remained mounted. He waved them away, hoping they understood his plan before doing the only thing that came to mind. He shouted in as deep a voice he could muster, reminiscent of his masterful storytelling entrance. “Who is this who treads with ill-intent upon Sinoan grounds?”

There was a moment of silence, and the hoofbeats stopped. Jaranin saw both Isalaina and Elun stiffen. Apparently they hadn’t understood his message to run.

And then the hoofbeats came again, this time riding faster toward them.

“Go! Run!” Jaranin shouted to his friends as cried for Brand to ride. Fully committed to his distraction now, Jaranin rode Firebrand out into the open path, where he met Kerlonkus face to face.

Kerlonkus cackled gleefully at the sight of his prey: Jaranin.

“Emanír, Brand!” Jaranin shouted as the unicorn shrieked and dashed up the mountain pass. Kerlonkus thundered after him.

Jaranin lay down along Brand’s back, urging the unicorn faster and faster as they maneuvered up the treacherous path. The grass was fading away in favor of the hard, jagged stone. Brand struggled to keep his footing on the uneven and dangerous terrain, but still he rode quickly for fear for both their lives.

Jaranin chanced a glance back to see that Isalaina and Elun were following right behind him, and Kerlonkus was closing in.

Why hadn’t they run when he’d told them to? Jaranin spat with frustration and fear as they raced up the path.

Brand weaved his way up the mountain path, and it wasn’t long before Elun and Isalaina had caught up again. Kerlonku's mad laugh just behind them pushed the unicorns all the faster.

“Watch out! The path—!” Jaranin cried.

Firebrand whinnied as he skidded over the edge of a steep slope, followed by Dwyntail, Arvina, and all three of their riders.

Jaranin awoke with a groan. He scrambled to his feet despite the throbbing headache. He’d been unconscious? For how long? Where was Kerlonkus?

Jaranin looked about, but the landscape he found himself in was completely foreign. Mountain peaks, like jagged teeth, encircled the round fog-filled valley of grass he now found himself in. He glanced upward to see the path he and his friends had skidded down.

His friends! Jaranin whirled about, his eyes roving across what little space he could see through the fog. Stirring beside him, Firebrand struggled to his feet. The unicorn appeared dazed, but relatively unharmed from the tumble.

Jaranin hunted through the fog, calling for Elun and Isalaina before he heard their voices a short distance away. They were brushing off their unicorns, who also appeared relatively unharmed.

“Your shout warned us, so we had a bit more time than you.” Isalaina explained. “How’s Brand?”

Jaranin was about to respond when Elun interrupted. “‘Hoi, mates… where are we…?”

A few paces away from them, the grass died away to reveal earth black with soot.

Jaranin took a step into the fog. A wind whistled about his ears and billowed the mists away in a moment as if by enchantment.

Looming just ahead, lying in the mists and the shadow of night, lay the charred remains of a ruinous city. All three young riders gasped.

“But Kerlonkus—!” Jaranin turned to look, but the path they’d fallen down was silent and still. Nothing remained around them but the silent, still city. They waited a few breathless moments, watching and listening, but there was no sound here but the wind.

“Maybe we lost him when we tumbled down the pass…?” Elun hissed, barely daring to hope. None of them were bold enough to raise their voice above a whisper now.

Jaranin shook his head. “He was nearly on top of us the whole ride. If he hasn’t come down to follow us, he must be waiting at the top.”

The three had little choice. Either sit here at the edge of the path in the open… or enter the ruinous city before them.

“Well, there’s naught for it,” Jaranin heaved a deep sigh and marched toward the ruins. His companions quickly followed.

As they drew near the dead city, the three grew more and more quiet. Even the garrulous Elun was silent. Despite the fog clearing, a death-like stillness yet hung over the valley.

“What is this place?” Elun dared to whisper as they passed through two ruinous columns of stone that had once been the main city gate.

His companions had no reply. 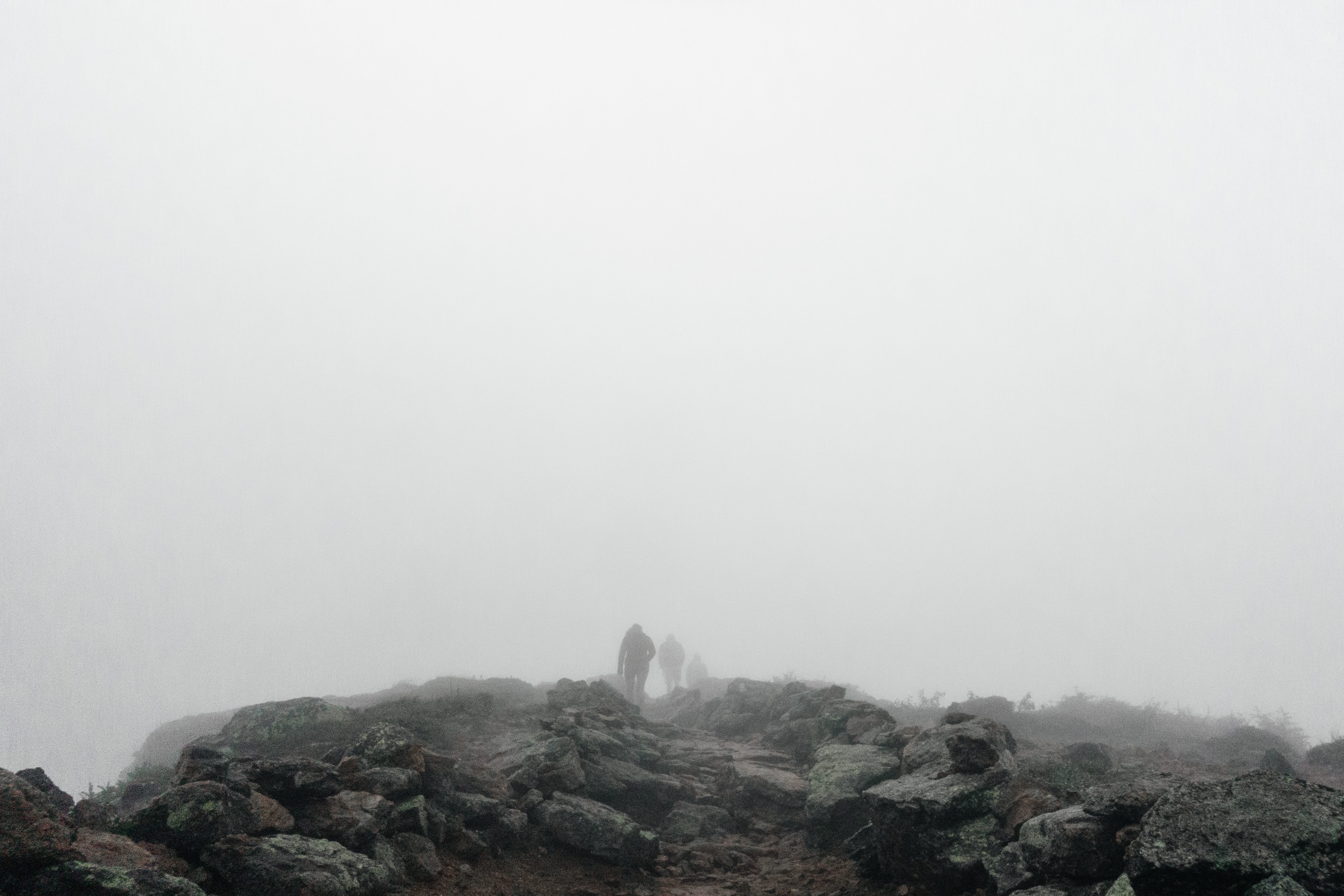 Photo by Ali Inay on Unsplash

Jaranin strolled at the lead of the group, his eyes roving over the ruins. He felt as though he were floating through the cracked cobblestone streets like a spirit. Mist collected at his feet. He, Elun, and Isalaina passed through a ring of sunken stone, echoes of a once-proud city wall.

Nothing grew here. There were dry, dead stumps from thin young trees that had been planted along the roadside. There was no sign of life in them—empty of all insects, no mushrooms gathered at their base, no bark covered with lichen, no moss or hint of green. Naught remained but the burnt husks of these few trees that might have once shaded passersby in the hot summer months.

The road was shattered, but not a single blade of grass, not one weed, grew betwixt the splintered stone. Everything was dead.

Jaranin uttered the first sound that may have been heard in the ruins for fifteen years—a horrified cry that needed no words—as he pointed beyond the mist.

Piles of bare-boned corpses were strewn about the road ahead.

“What happened here?” Jaranin whimpered, his voice hoarse as tears poured down his face. There was a skeleton not a foot away from him, a child whose skull had been crushed. There were two more ahead and to the left lying in a heap—a parent and babe. Five more bodies lay in the middle of the road, no doubt brave men who had tried to fend off whatever evil had attacked their home, fighting to the bitter end. Their bleached bones were broken into thousands of pieces, and the skulls were nowhere to be found.

“Who could have done this?” Jaranin’s voice nearly failed him.

Set in the center of the city was a clearing where rubble had been stacked into one blackened pillar: a jagged, unnatural, staggering thing with a threadbare flag that flapped and cracked although there was no wind. Upon the flag was the image of a black dragon breathing crimson flame in the air.

Jaranin felt his heart begin to hammer in his chest. He knew that emblem, although he was unsure how or why. A panic deeper than any he had ever felt before, even stronger than the fear he’d felt of the warriors’ blades, poured down his skull into his veins.

He pulled at Elun’s shirt sleeve. “We need to go.”