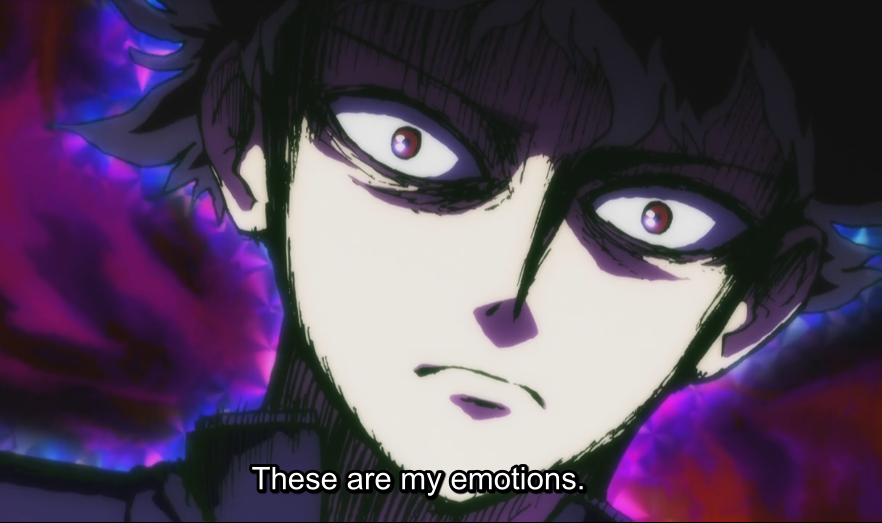 "They came out at your request. These are my emotions."1

He has powers beyond his control, powers no one else can understand. He's one of the world's few espers, able to bend reality using his psychic abilities. But he doesn't care about that. All he wants is to earn the affections of his childhood crush... and try to keep his powers—and his emotions—under control.

Because when he doesn't, people get hurt.

Adapted from the manga by artist and writer ONE, Mob Pyscho 100 follows middle-schooler Shigeo Kageyama, AKA Mob. He's the world's least-assuming, least-ambitious kid. Mob doesn't care about grades. He's terrible at sports. He doesn't even care about the only thing that sets him apart: his incredibly powerful psychic abilities.

They're really more of a burden than anything, after all. As Mob himself points out, psychic powers aren't like food and water; you don't need them to survive. They can't help you win love. They can't even help you with math homework.2

Ultimately, Mob sees his incredible abilities as something that separates him from everyone, especially the people he'd like to be closer to. No one in his family seems to understand his abilities. His childhood crush isn't impressed by floating objects.

The only useful thing he can do with his powers is help his employer, Reigen, an outrageous con-artist who survives off luck and relies on Mob's abilities to fuel his dream of running an exorcism business.

I love Mob Psycho 100. And if you like incredible powers, laugh-out-loud humor, and flashy fight scenes all used to tell a meaningful story, you might too. 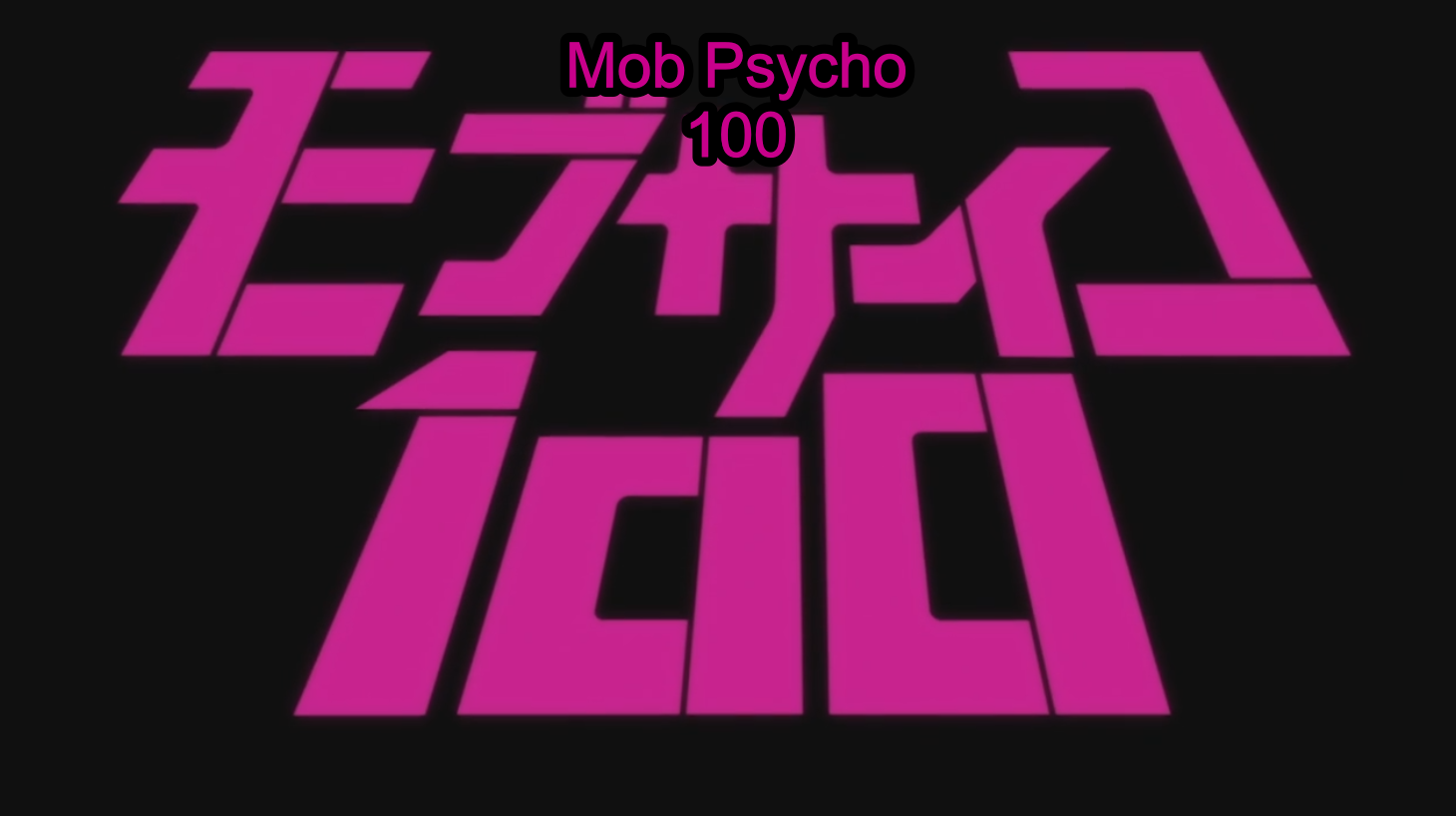 Fair warning: Mob Psycho 100 is highly stylized to fit ONE's simplified artwork. Mob is defined by his blank-looking face. Mob's love interest, Tsubomi, has almost obnoxiously exaggerated features. And most other characters are downright hideous. In short, you're not gonna find any lookers here.

However, this is all intentional. Mob Psycho 100 is a bit of an anime parody, tweaking the nose of anime tropes. Unlike most anime that utilize highly attractive and idealized character designs, Mob Psycho's character portrayals are a bit more realistic—ironic for a show about psychic users pitting their skills against each other. Like an artist's brutally honest self-portrait, everyone is presented bluntly. This "warts and all" approach may turn some viewers off, however.

The simplistic art style does get more detailed and impressive during the hectic fight scenes. This is when the animation doesn't hold back, firing up the screen with crazy flashes of color and impactful animation that highlights the power of each hit. One thing's for sure: fights are never boring in Mob Psycho 100.

You know what else never gets boring? The show's sense of humor. Irony abounds here, as many of the jokes play off Mob's general social cluelessness. This allows for some great situations of dramatic irony, such as every time Mob's con artist employer Reigen nearly gives away his lack of psychic powers.

Even better, the jokes never make fun of Mob. For a show this humorous, it takes its protagonist quite seriously. Characters who put Mob down are regularly shown to be in the wrong. Mob Psycho may not take itself too seriously, but it certainly doesn't do so at Mob's expense. This enables the viewer to not only feel for Mob but also to relate to him if they've ever struggled with bullying, not fitting in, or just generally not understanding others.

Because surprisingly, this show is not just for kicks and giggles. While humor permeates the show to the very last episode, Mob Psycho 100 also has its emotionally stirring arcs and some truly profound life lessons covering topics such as social anxiety, the highs (and lows) of having an innate talent, healthily dealing with emotions, and much more. And the show perfectly paces out this transition from a comedic slice-of-life to something particularly meaningful.

This show succeeds both in its ridiculous humor and in its serious notes. And no two characters display this better than Reigen and Mob. 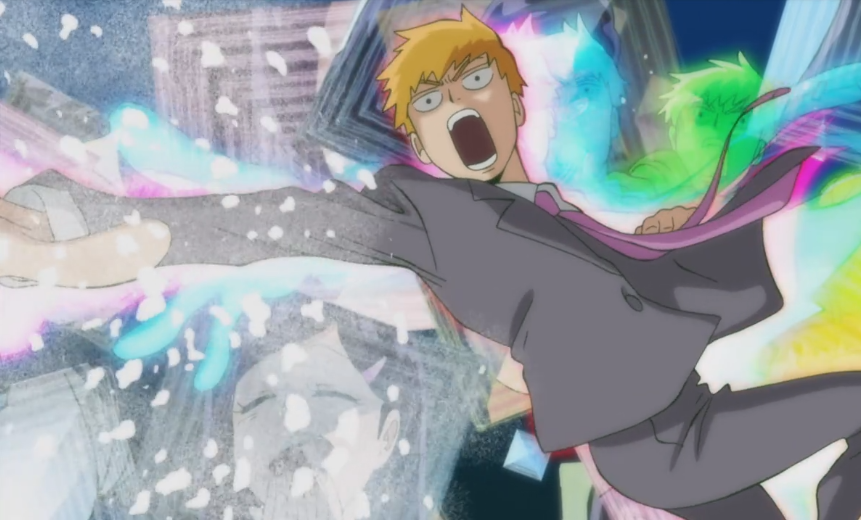 Reigen is this show's Captain Jack Sparrow. He's so hilariously over-the-top that you can't help but fall in love with him. He's got the charm of a devilish rogue while not always getting his way, and he can talk his way out of almost any crazy situation he gets himself into. He's a terrible person while actually being a pretty great guy. While his business couldn't function without Mob, it's also clear he cares about the kid, as he goes out of his way to protect Mob, even putting his life on the line to do so. He's a barrel of contradictions that somehow perfectly remains one cohesive character.

Contrasting with Reigen's over-the-top nature, Mob is quite subdued. He seems like an unnaturally straight-faced and slightly socially awkward kid, but he has a vulnerability that makes him incredibly endearing.

For instance, one of Mob's defining characteristics is his frequent deadpan expression and his frequent lack of strong emotional responses. He'll get embarrassed or flustered, but he's usually neither extremely happy or sad or angry.

But this is purposeful: Mob is afraid of his emotions.

His psychic abilities are strong as it is, but they only reach full power when he's overcome with emotion. In this 100% state, Mob struggles to control himself, becoming almost monster-like with his unparalleled power. This means that any emotional outburst could be potentially devastating to everyone around him. Couple this with Mob's intense concern for others and his steel-hard morals (refusing to use his psychic abilities to hurt others), and it's easy to see how he began to bottle up his emotions. But Mob learns the hard way that this is not a healthy way for anyone to deal with their emotions, least of all him.

And that's just one of the many serious topics Mob deals with. Told you this show wasn't just for kicks and giggles.

Mob Psycho 100 is a hilarious anime with a ton of heart. It perfectly balances humor with real life lessons and never mocks its characters or over-simplifies real-world problems. My only complaint was the hole in my heart this show left once I finished its 12 episodes.

So if you're on the hunt for shows about powerful espers, you can find the subtitled version of Mob Psycho at Crunchyroll. And if you decide you need more, good news! Season 2 is currently in production.3 There may not be a release date yet, but you can be sure this fan will keep you posted!

In the meantime, enjoy your romp in the wild world of Mob Psycho 100.

---
Notes and References:
All photos property of their respective owners and used under US "Fair Use" laws. Unless otherwise specified, all are from VRV.

Mob Psycho 100 and all related names and terms are the property of Funimation.