This one is a much more intense post, so readers who are sensitive to violence be advised.

This was from a version where Isalaina was part Forest fairy and had a healing ability.

---
[Jaranin and Kerlonkus clash constantly at the stables run by Kerlonkus's father Naman. Father and son both make the job a nightmare for Jaranin. But the bullying comes to a head one night as Jaranin walks home...]

He glanced down and felt his ribs, the ones Isalaina had healed just the night before. He could almost feel Kerlonkus’s knuckles crashing into his side again. The sensation was getting more common every year.

Jaranin’s eyes fell to the ground. Naomi, sweet Naomi, the only mother he’d ever known. She would never let him work at the stables if she had any idea what went on there. If she ever found out how Kerlonkus would taunt him, beat him, mock him. And as for Naman… It was difficult to say who was worse, the father or the son.

But Naomi could never know. Jaranin was too old to begin a new apprenticeship, and he had no father to glean skills from. His only option was to remain with Naman; working with the unicorns was the only skill he had, and Naman’s was the only stable close enough.

Jaranin shifted his gaze, and his thoughts soon followed. It would never do to dwell on things he could not change. Quickening his pace and forcing a smile, Jaranin continued loping down hill after hill, drawing slowly nearer to his and Naomi’s handsome little house. He didn’t enjoy the prospect of work tomorrow, but he less enjoyed the visions that plagued his dreams of Naomi wasting away to skin and bones from lack of nourishment.

Jaranin frowned and geared up his belt, looking tough and determined. He’d make it. He was sure he would. He’d do it for Naomi’s sake.

As Jaranin trudged on, he chanced a glance up at the sky. His good cheer darkened a shade as he ran his eyes along the golden-colored hues of the evening sky. Later than I thought, the lad mused. The sun was low on the horizon, dipping down to touch the distant treetops in the west. 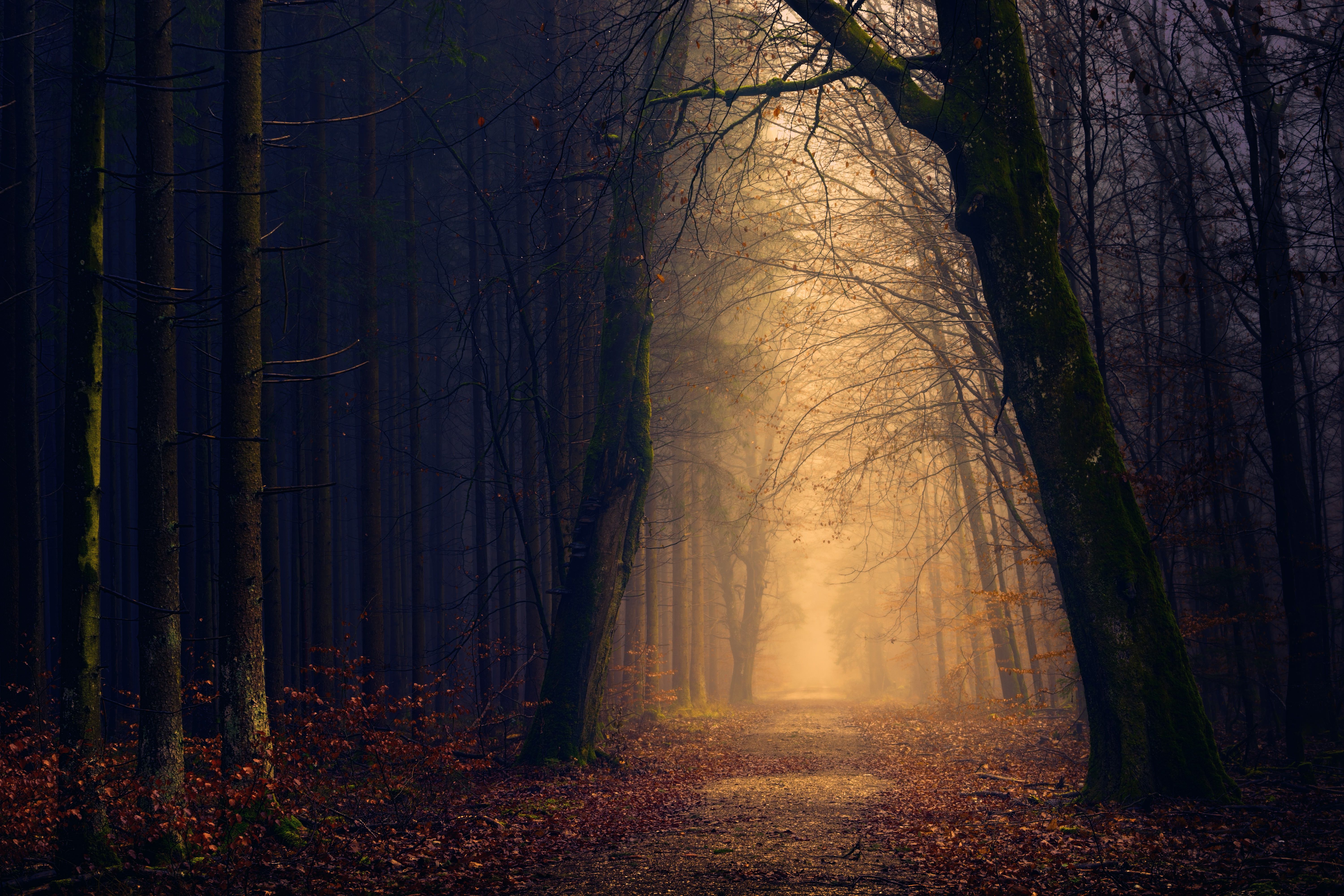 Photo by Johannes Plenio on Unsplash

Jaranin grunted as a heavy, blunt object struck him on the shoulder, shoving him sideways into a tree beside the path. His flank hit the trunk, followed closely by his head.

As the world spun and bright colors danced before his eyes, Jaranin felt something tough but fleshy slip from his shoulder to his neck, squeezing his windpipe and pinning him to the tree. It took him a few moments to recover from the blow and realize it was a tightly-muscled arm covered in long, wiry black hairs that was now squeezing the breath from his throat.

Kerlonkus’s face loomed into view, and Jaranin gagged more from the stench of his musty breath than the bully’s arm on his throat.

“Well, well. Looks like I’ve caught myself a little piggy in the forest.” Kerlonkus’s sneer was lit by his greedy, eagerly-glittering eyes. Kerlonkus quivered with energy and delight. He was feeding off Jaranin’s terror. The more Jaranin stared, horrified, into Kerlonkus’s eyes, the harder Kerlonkus seemed to press his arm into Jaranin’s neck.

Kerlonkus’s breath came quicker, and his eyes glowed with an even brighter delight. Only one thought could circle in Jaranin’s mind: He’s going to kill me!

It was growing hard to breathe. Jaranin gaped and began to squirm, instinctively clutching at Kerlonkus’s arm with his hands. He hopelessly tried prying the lad’s arm off, but Kerlonkus was far too strong to be trifled with.

And yet, as if suddenly sensitive to Jaranin’s wordless plea, Kerlonkus removed his arm. Jaranin gulped in a deep breath before he felt a blunt object crash into his chin. Jaranin’s world flashed black and red before he fell hard to the earth. His jaw felt as if it were broken. Even as he rose to his knees, his hand flew to his mouth and came away dipped red with blood.

With a satisfied smirk, Kerlonkus lumbered over to Jaranin, kicking him with full force in the ribs before the younger lad could scramble away. Jaranin howled and crumpled on the grass, coiling into a tight ball. He clutched his side and clenched his eyes and teeth as tight as he could. Jaranin struggled to maintain a grip on his tilting, spinning world of consciousness.

“Listen, sty-breath,” Kerlonkus’s tenor voice had sunk to a deep and ominous growl. “You’d better thank that old hag of yours. If it weren’t for her, I wouldn’t have to be so careful where I hit, and I could beat that pig-face of yours in.”

Even from the ground, Jaranin glared and growled through his teeth. “Don’t you dare call Naomi a hag!”

“But we can’t have anyone finding out about our daily fun, can we?” Kerlonkus kicked him again, and Jaranin shouted at the pain. “Shut your mouth. It’s not her I came to talk to you about.”

Jaranin stared up into Kerlonkus’s face and nearly vomited at the look of sickening greed that spread across his features as Kerlonkus said, “It’s about that girl…”

Despite the screaming, searing pain in his sides, Jaranin struggled to rise. “You keep your dirty paws off her.” The growl in his voice surprised even him.

“Ha! And what are you gonna do if I don’t, eh?” Kerlonkus snarled and spat a gob of thick spittle at Jaranin.

The spit hit Jaranin on the cheek. He gagged and wiped it off with his sleeve. “I’m warning you, Kerlonkus… You stay away from her…”

“What’s her name, anyhow? She’s pretty,” he observed absently. And then, a flash, a glint in his eye. “Isalainaaaa...” A hungry tone tinged his voice. “That's the kind of girl I’d like to enjoy…”

Every drop of blood boiled over in Jaranin’s veins.

Jaranin exploded, hurling every ounce of his strength against Kerlonkus. Both boys went tumbling, Kerlonkus with a cry of surprise and Jaranin with a roar erupting from his own throat.

Jaranin landed four hard punches to Kerlonkus’s face before Kerlonkus shoved him off and pounced. For all his girth, Kerlonkus was alarmingly nimble. He was at Jaranin’s throat in an instant, twice as powerful and thrice as frightening as before.

Kerlonkus roared, charging Jaranin like a wild boar and pinning the smaller boy against another tree. Kerlonkus pressed his face up to Jaranin’s, nose to nose, his ragged breaths puffing hot and heavy against Jaranin’s cheek. But after a moment, Jaranin noticed that Kerlonkus was no longer fuming, and his face was no longer beet red. He was even leaning slightly away from Jaranin, though his fist was still full of Jaranin’s shirt collar and his forearm still pinned Jaranin’s torso to the tree. Then Kerlonkus’s twisted smile began to reform, and he even uttered a mirthless laugh. “Is that it?”

Kerlonkus lowered Jaranin from the tree and tossed him to the ground. Jaranin grunted as he landed painfully on his cracked rib.

“And you’re attempting to defend your lady-love?” Kerlonkus cackled. “You don’t even have the strength to protect yourself. You’re nothing but a weak little squealer.”

Gritting his teeth, Jaranin ignored the pain in his rib and swung his leg wide, kicking hard at the back of Kerlonkus’s knee. The taller lad went tumbling, and Jaranin leapt at his opponent with a newfound rage.

Jaranin dove deep into his roiling fury. He wanted to throttle Kerlonkus. Or better yet, punch that pink face in. He wanted to beat Kerlonkus bloody. He felt enraged, unbridled, untamed at the thought of Kerlonkus slobbering over Isalaina.

Jaranin landed three hard punches before Kerlonkus shoved him off and pounced. For all his girth, Kerlonkus was alarmingly nimble. He was at Jaranin’s throat like a wildcat in an instant, twice as powerful and thrice as frightening as before.

The two boys wrestled and swung until one fell, unconscious, and the other fled back into the forest whence he came.

It wasn’t until an hour later, long after darkness shrouded the battlefield, that Jaranin finally dragged himself to his feet and hobbled back home.