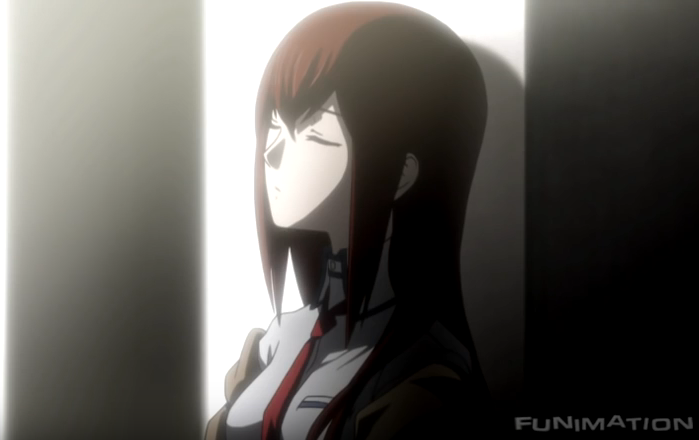 “You have no memory of the three weeks you spent with me. But that's okay. Somewhere out there, you're breathing, speaking, thinking hard about something... That's all that matters. Because somewhere out there you're looking at the same world I am... this world with an unknown future.”1


Based on the visual novel by 5pb. and Nitroplus, Steins;Gate follows Okabe Rintaro and his friends as they stumble upon the secrets of time travel, a dangerous secret society, and a plot to enslave the future.

Make no mistake: Steins;Gate will keep you on your toes. From the unsettling aesthetics to the plot's twists and turns, you'll never be sure where Steins;Gate is going next, but you'll sure enjoy the ride.

From the start, you get the sense that all is not normal in this universe. Episode one contains a lecture on time travel, mentions of a real-world internet conspiracy, and a terrible crime. Then the push of a button causes the world to shudder and go wild with color. When the smoke clears, a crowded street is dead, with the protagonist left alone, confused... and horrified when he discovers a satellite is now jutting from the building behind him... and the crime he'd witnessed earlier had never taken place. 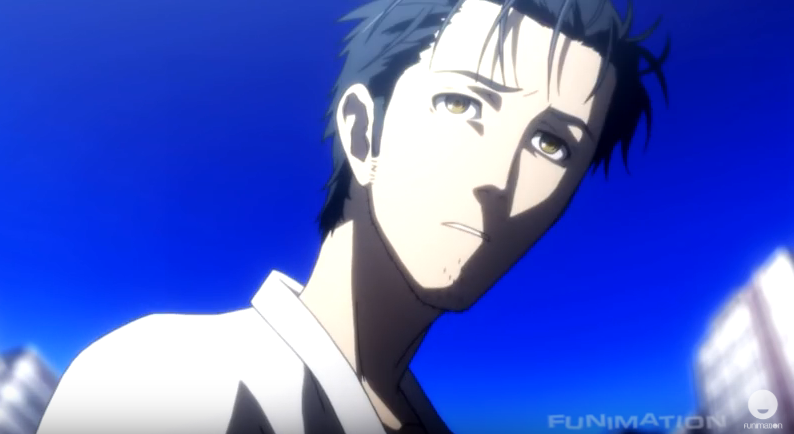 This is juxtaposed with just how normal a person our protagonist Okabe is. Immediately after the eerie scene, he joins his friends at their usual hang-out spot: a low-rent apartment in a quiet part of town. It makes you chuckle and relax a bit. There's nothing wrong here after all. It's just a couple of crazy, bored teenagers pretending to be scientists and performing the kind of wacky experiments that become YouTube viral videos. The bizarre events that kicked off the show become a distant memory.

And then the plot kicks into gear.

Like a proper mystery novel, Steins;Gate delivers carefully-placed clues leading up to gut-punching reveals. Details matter in this show, and I'm not the only person to argue that a second viewing will often yield even greater satisfaction than the first.2

But Steins;Gate is not only a master of compelling set-ups and satisfying payoff; it also knows when to leave an air of mystery. Nothing is explained to death in this show, proving its respect for its audience.

Steins;Gate has unique design that is dripping with storytelling purpose. Otaku Gonzo Journalism, an essayist and cinematography enthusiast, describes it best in the first part of his series “How to Recognize a Great Anime (in just one episode) [sic].”

“Steins;Gate does an excellent job of generating a sense of mystery and suspense in its audiovisual design alone,” Otaku asserts, pointing out specifics such as the usage of lighting in the very first episode:3

“[E]ach shot is framed in such a way as to make [the characters] look overly white and washed-out... [Even] some of the buildings seem to simply evaporate into the atmosphere as they get further from the camera... There's something unsettling about how this entire scene is colored, as if the boundaries of reality have become opaque and uncomfortable...”4

However, Otaku also points out that “[t]he look of the world is mostly realistic, but with a slightly-off-kilter color palette that would be unusual in any medium.”5 This trend of mostly-normal but slightly-off continues through every aspect of the audiovisuals, Otaku says.

“The character designs have a very Pixiv-esque feel to them... yet the tall bodies and relatively normal proportions of the characters make them feel fairly realistic... The voice actors are clearly doing anime voices, yet they perform them with more subtlety than they typically would, and the sound design skews so sparse and foley-focused that the events feel like they're being recorded right there in the world, rather than dramatized for television.”6

Everything is otherworldly while remaining inviting and grounded; it's intentionally contradictory. We're not in Kansas anymore, but we're not in anime-land, either. But if this isn't our Kansas, it must be somewhere close enough.

The premise, pacing, and plot are solid. The audiovisuals are masterful. But Steins;Gate's characters are still the best part of this show.

I've already gushed about two of the main characters in my Top 10 Anime Guys and Girls posts, so pardon me if I start to repeat myself. I just can't get enough of this cast!

Every character in Steins;Gate (with the exception of one single bit part) feels like a full person, not a stereotype. Each character is incredibly likable, because despite their realistic flaws (Okabe is pretentious and socially inept, Kurisu is proud, Mayuri is naive, Daru is a shut-in who lives off his libido), they still care about each other and bounce off each other well. They're a fantastic portrayal of real friend-group dynamics: one minute they're playing a board game, the next they're harassing each other, and the next they're all laughing about it.

The show never resorts to drab exposition to tell us about these characters; Okabe doesn't preach about his tragic backstory. The characters show off different sides of themselves in realistic and organic moments of vulnerability, such as in one of my favorite scenes in which Okabe and Kurisu open up to one another. As they gaze up at the moon, Okabe tells Kurisu about a painful memory that spurred him to take on his mad scientist persona. In exchange, Kurisu tells him how difficult it was growing up trying to please her brilliant father.

There are so many layers to each of the characters, especially Okabe. He's more than this crazy goofball we were introduced to in the beginning. When Mayuri stares longingly at a quarter-operated machine, pining for the small toys inside, Okabe smiles and, despite his lecture that “Life is cruel and we don't always get what we want,” he gives her a coin. You can tell her delight makes it all worthwhile for him.

And when he stumbles across a terrible crime against a girl he only recently met, his horror is palpable. He doesn't have it all together, and he's heartbroken that this girl he just spoke to a few hours ago—argued with a few minutes ago—is the victim of something horrible.

What I love most about the cast, however, is how each character brings out different aspects of Okabe's personality. Mayuri, the innocent, childish one, brings out his protective side. Suzuha and Ruka bring out Okabe's compassion. Faris is one of the few who actually plays with him as he rants and raves about being a mad scientist. Moeka brings out his ferocious masculinity and his raw determination to save as many people as he can. Daru both encourages and makes fun of Okabe's drive for science and knowledge. And Kurisu makes him a better, more introspective person, challenging him in every way.

So if you're looking for a show that's smart, funny, witty, clever, and deep, check out Steins;Gate. If you like shows with striking visuals, amazing voice acting, and shocking twists, you won't be disappointed.

Curious future Lab Members can find this show on Funimation's Youtube channel, which offers the series dubbed in English or subtitled. Best of all, once you've finished binging, you can head over to Crunchyroll to watch the sequel series, Steins;Gate 0, for free!

So what are you waiting for? The will of Steins;gate is waiting. 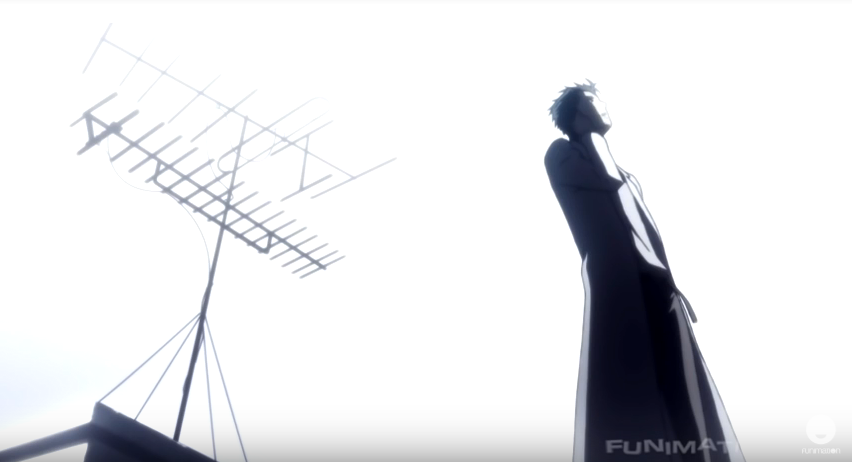 Steins;Gate, 2011 White Fox
---
Notes and References:
All photos property of their respective owners and used under US "Fair Use" laws. Unless otherwise specified, all are from Funimation's official YouTube channel.

Steins;Gate and all related names and terms are the property of Funimation.