I originally wrote this two-part short story for my college Creative Writing class taught by author Janet Riehecky, chronicling one of the many misadventures of Frum Wimbleton, Cartographer of Amboron. This is a slightly tweaked version, edited for clarity.

Like The Exodus, this is another tale in the TVB Universe, though many years before Jaranin's adventures.

Frum Wimbleton, a scrawny five-foot elf, dangled from a pickaxe dug deep into the mountainside. With his hand clapped to his brow, he sheltered his eyes from the glare of the sun and the whiteness of the undisturbed snow. He may have been shivering like an autumn leaf, but his blue eyes glittered with marvel and mischief.

Pepin looked like your average Faer boy: lithe and beautiful and two heads taller than Frum. The wind buffeted Pepin's long white hair and both the boys' ears, carrying with it a sheet of delicate frosty snowflakes. Despite the cold, however, Pepin's ruddy complexion was only due to the exertion of the climb, not the wintry chill. His lovely fur-lined coat was only for fashion, not function.

Grinning brighter than the snowy scene, Frum whistled through his teeth. “Boy, you Snow Faer sure are a spoiled lot.” He swept his free arm around, gesturing to the snow-covered rocks and the area far below, where they knew Pepin's little village lay tucked between the boulders. If it wasn't for the wind kicking up all the snow, they'd be seeing smoke rising from tiny chimneys down there.

Scuffling boots and a crunching pickaxe, however, quickly dragged his attention away from the village and back to Frum. He was scooting up the rocky cliff face, more at ease than a squirrel in a tree. Frum chortled. “You get to enjoy that view every day!”

After one last longing glance below, Pepin mournfully followed. 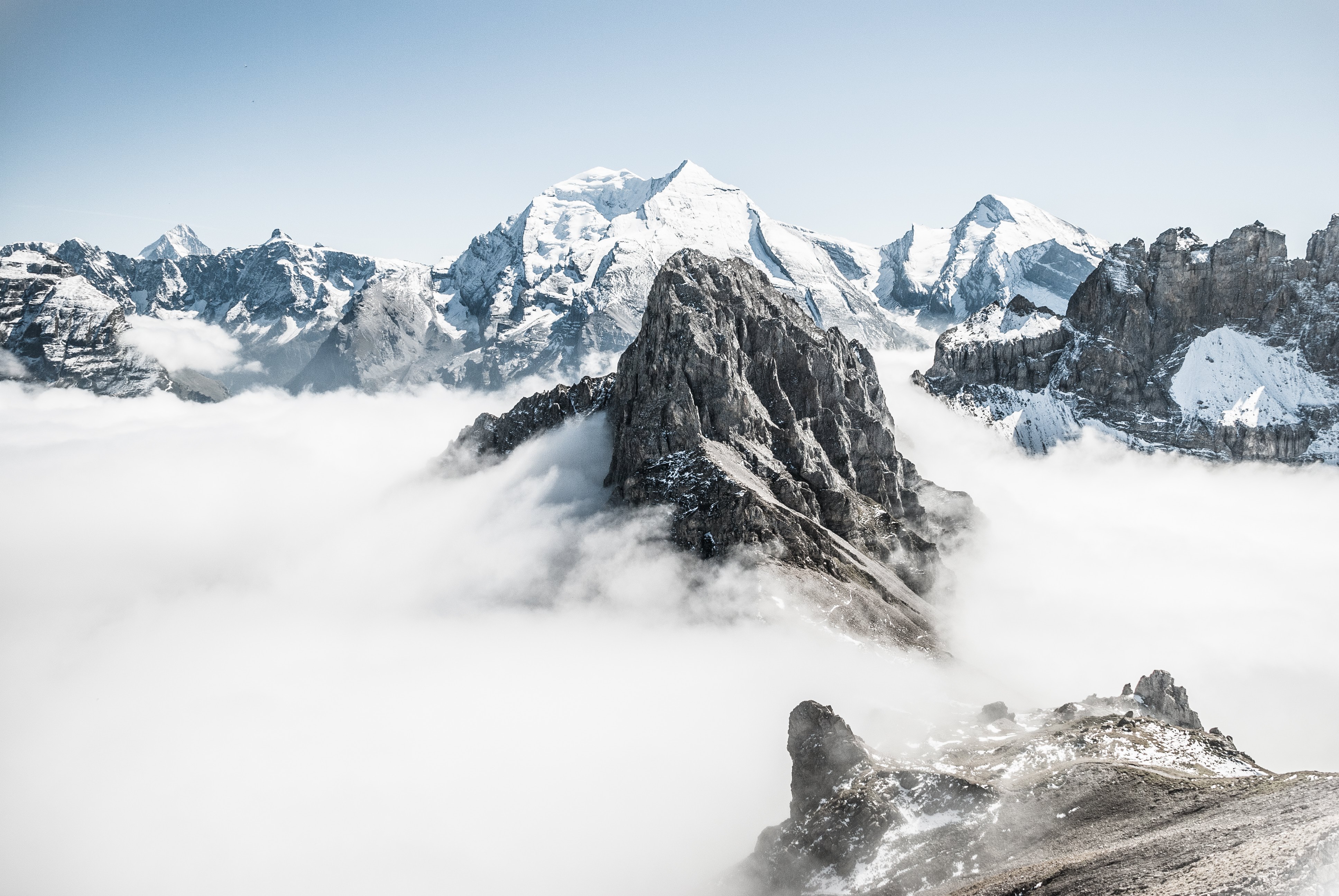 Photo by samsommer on Unsplash

“Y’know,” Frum called between chips of his pickaxe, “when that old guide told us a storm was comin' and I'd realized we'd have to climb our way to the top, I thought it was 'cause you'd be too feeble to fly us up!”

Pepin wrinkled his nose and gave Frum a sour look.

“—Oh, sorry, Pep. Didn't mean it like that. I just meant you're probably too weak-kneed! Scared-like. On account of you've never been on an adventure before.”

Judging from the unamused expression on Pepin's face, it didn't seem the clarification was any better.

“But it'd probably be real dangerous to fly during a snowstorm, right? And I didn't want to endanger my new pal! So I figured I’d best not press my luck.” Frum dipped his head back, inhaling a deep breath of fresh air. “So climbing it was!”

“But I'm real appreciative you came!” Frum grinned. “I needed a climbing partner. Never climbed a whit, not my whole life.”

Pepin rolled his eyes. It seemed the information didn't come as much of a surprise.

For another hour, the mountain was silent but for the crunch of boots, the swing of pickaxes, and the sighs of two tired young climbers.

“We’d best find a place to stop,” Frum finally said, breaking the silence as he looked around at the gathering snow and ice. “It’s getting late.”

They swung themselves up to the lip of a ledge, rolling into a snowdrift up to their knees. They dug in the snow furiously, shifting it around and packing it in until they'd formed themselves a little house of snow. As the sun dipped low on the horizon, the two exhausted boys crawled inside for the day.

But just as Pepin set his head down with a contented sigh, his companion's voice broke the silence. “Pretty incredible how the cold doesn’t affect ya.”

Frum was bundled under four layers of knitted blankets. All Pepin could see were Frum's blue eyes, peeping jealously from beneath his blanket hood. Despite his cozy fortress, the elf was shivering uncontrollably.

Pepin shrugged, then rolled over to stare at the white domed ceiling of their temporary home. He looked quite comfortable, lying directly on the snowy floor.

Frum wriggled like a caterpillar inside his cocoon, struggling to move under his confining prison of blankets. After several minutes with little success, he finally flopped down and lay still. He joined Pepin in staring at the ceiling. “Funny how you can be warmer inside a house made of snow, huh?”

With a weary sigh, Pepin rubbed his sleepy eyes.

Frum chuckled. “Ah. But you've known all about that, huh? Must seem normal since you've lived here all your life.”

“Never been outside the village before, though; not a whit, right?”

And for the next few moments, Frum was silent. Pepin released another deep sigh, this one of relaxation that only comes after a hard day of exertion. He dropped his head back down on his arm. His whole body relaxed. As he closed his eyes, the briefest smile crept across his face—

“Huh. This trip must be strange for ya.”

Pepin’s bloodshot eyes roved back to Frum, ready to kill him with the glance.

The elf wasn’t looking at Pepin, however, and Frum continued chatting while staring up at the ceiling, as if holding a conversation with it and not his Faer companion. “Never left home, never had a friend, never so much as spoke, just keepin’ to yerself for years and years…” Frum threw his head back and guffawed. “Boy, what a life!”

Rolling his eyes, Pepin shifted to turn his back to the elf.

“Aw, I wasn’t mocking you, honest.” Frum shook his head violently. “It’s just…” Frum paused, as if at a loss for words.

Pepin glanced over his shoulder, one eyebrow raised.

“Well, I would have left years ago had I been you.” Frum shrugged. “That kind of life just doesn’t seem like living to me.”

Suddenly Frum ejected himself from his blanket cocoon, hurling his arm around Pepin’s shoulders chummily. “Not like out here! Where us two men spit in the eyes of odds and scorn Lady Fortune's will, makin' shelters with our bare hands and building fires and scalin' mountain clefts! Now that’s living!”

Pepin cast him an uncertain grimace, but Frum didn't seem to notice. He patted Pepin’s back. “And I couldn’t be doin’ it without you, pal.”

Pepin knitted his brow but made no further reply.

The time passed slowly in their little makeshift shelter. Frum tossed and turned in his sleep. Pepin dozed off hour by hour, each time waking with a start. There was an itching sort of feeling in the air, and both boys seemed to sense it.

At last, the sun rose and so did the lads. They packed up their things and surged into the cold mountain air once more.

Pepin trudged through several feet of snow slowly, wearily, as Frum whistled and skipped by. The elf nearly floated atop the deep snowfall, and he was apparently oblivious to the mountain and its silent loneliness. The day was cold, and the bitter chill must have nipped at Frum’s red nose, but the elf hardly seemed to care. “Boy, ain't this the life? Lost in the bliss of adventure, the wild calls of travel? We're facin' the great challenge, Pep—overcomin' the mountain and becomin' a man!”

Pepin tilted his head to one side, as if contemplating this ridiculous assessment of their predicament while Frum tramped on like a toddler.

Suddenly, the elf froze, hand cupped to his ear. “’Hoy, hear that?”

Pepin stopped, one foot still hanging in the air, mid-step. He caught a breath and held it.

The whispering wind that had echoed outside their snow fortress had picked up since they’d left the igloo. Now the gale tore around crags and clawed at the crevices of the mighty mountain, howling and snapping.

Frum cast a nervous grin back to Pepin and tapped his nose. “Storm’s picking up.”

A few hours had gone by. The sky above them, now smothered in gray clouds, stood in stark contrast to the white snow at their feet. Pepin tilted his head backward, glancing up at the dark sky.

One by one, white flakes of snow drifted sleepily from the gray sky, cloudy stars that fell to the mountainside.

Frum had finally noticed and had also tilted his head to the sky. “Oooh...”

Pepin closed his eyes and let the snowflakes land lightly on his eyelashes and in his hair. Frum tried, unsuccessfully, to catch a few on his tongue. He giggled; Pepin smiled.

The two boys continued their climb. It was a beautiful night.