We're going back to Titan A.E.

This may seem like a blast from the past to those who remember the review I wrote on this film back in June of 2017. To those of you who are new or need a refresher, Titan A.E. is an early 2000's space opera in which the alien Drej destroy Earth, leaving the remnants of humanity homeless... unless Cale Tucker can locate his father's brilliant terraforming machine, Project Titan, and create a new planet for humans to call home. 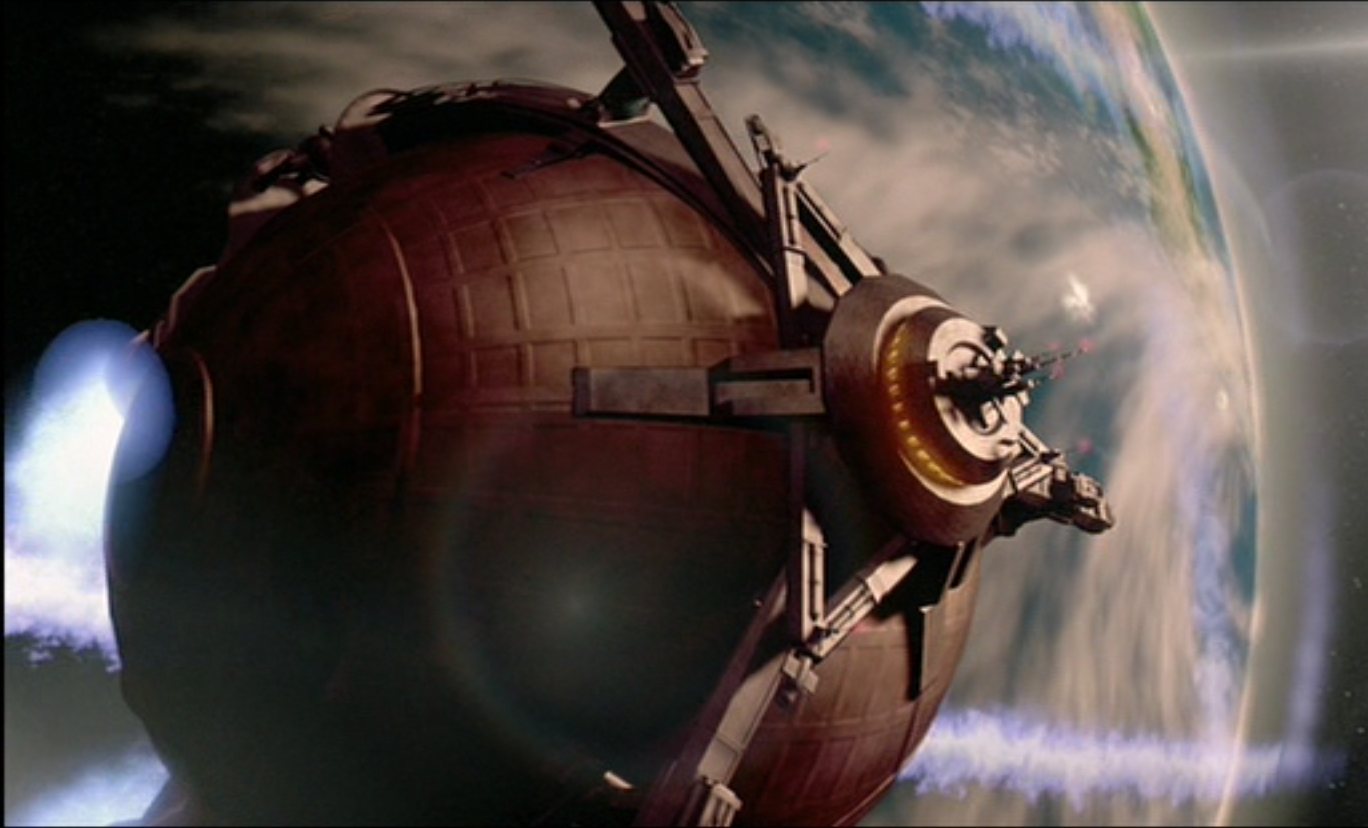 One could argue Titan A.E.'s failure was a culmination of many complex problems rather than one single issue, but its lackluster story certainly didn't help ticket sales.

As I was working on my review, I realized that Titan A.E.'s ills stem from one core problem: it tried to be a plot-centric story when it was begging to be a character-driven one. With this in mind, it became far easier to pinpoint how to improve the narrative.

Here's how I'd go about fixing Titan A.E.


To shift the film to a character-driven story, I would do two things:

Writer Mark Nicol asserts that there are seven different types of narrative conflict.3 One of the most common is Person vs. Person: this conflict type pits the main character against an antagonist. This is the superhero fighting the supervillain, Bruce Willis punching terrorists, and so on.4 By contrast, Person vs. Self conflict focus on the main character's struggle with their own nature or character flaws, including their “prejudices or doubts.”5 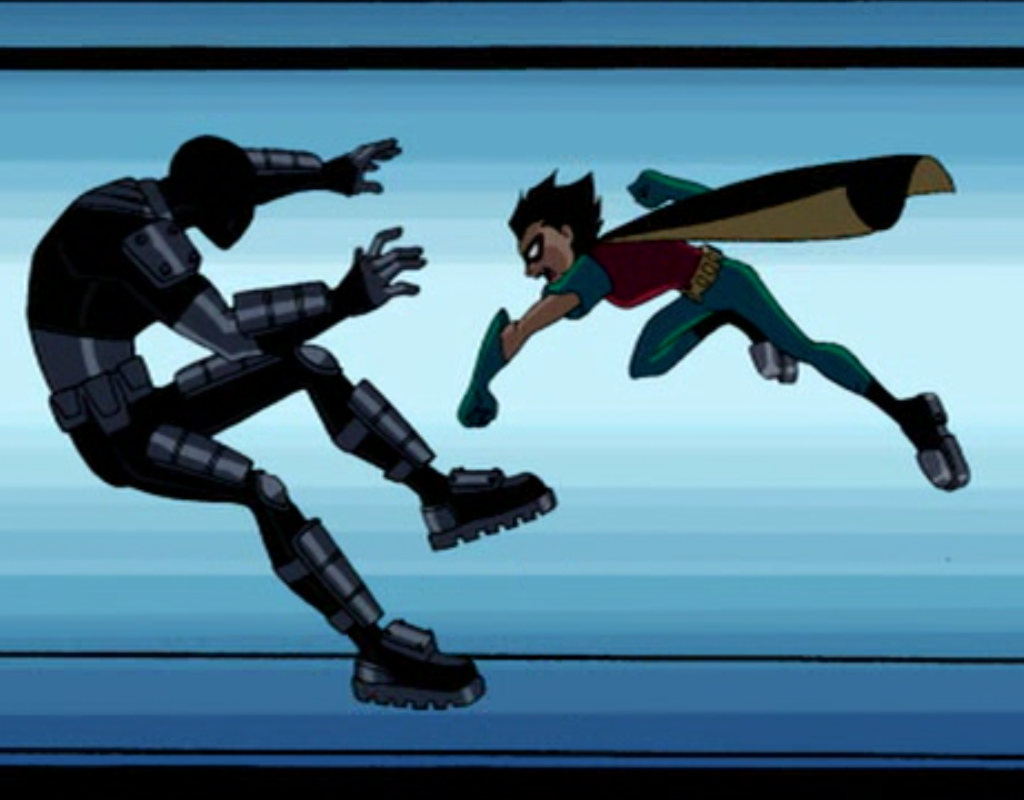 Titan A.E. was written as a Person vs. Person conflict, but it would have worked far better as a Person vs. Self conflict. Rather than highlighting Cale's fight against the Drej, focusing on Cale and the crewmembers' prejudices would have created a far more nuanced and meaningful story.

But shifting the conflict type would cause some major changes to the pacing and plot. Let's start by looking at what role the Drej would play in a Person vs. Self story.

Even in the original film, the Drej do a great job getting humanity (including Cale) backed into a corner. I love that the writers used the Drej to make humans the underdogs instead of resorting to the “Humanity's pollution burned Earth to the ground” cliche.

Unfortunately, the Drej were not designed to support a Person vs. Person narrative conflict. Their motivation is unclear at best. And because the Drej are technological, near-supernatural beings, they have no personality. As I said in my article defending “Evil for Evil's Sake” villains, these kinds of antagonists only work if they have either a clear motivation, a striking personality, or both. The Drej have neither. So we're left with a poor antagonistic force and, by extension, a weak main conflict. You can't have an interesting story about one person against another without clearly labeling why they're opposing each other and who each force is.

But if we switch the film to a Person vs. Self conflict, there's no need to keep the Drej around. They cripple humanity in the first few minutes of the film, so after that point, we can write them a swift exit. Maybe blowing up Earth is their final act: their weapon misfires and destroys them as well as Earth. It might seem too convenient that the humanity-destroying-race suddenly disappears, but it does send a pretty powerful “You reap what you sow” message, and it reflects how imbalanced trying to take out an entire group of people can make the world!

Or, if you don't want to remove the Drej altogether, have most of them die off but leave a few survivors. (After all, if humans survived the Drej attack, maybe some Drej did, too.) If you did this, you could even put a Drej on the crew. That would certainly cause some interesting conflict!

And that's our ultimate goal now that this is a Person vs. Self conflict: play up the “us-versus-them” mentality between the alien races and humans.

This creates a far more interesting dynamic among the crew (half of whom are not human) and it amps up the conflict. Instead of being mildly annoyed by one another, now they start at each other's throats. The aliens now toss Cale back-handed compliments at best and insults at worst, and he dishes it right back. After all, humans are old news. They're the butt of the universe's jokes. This conflict best highlights just how much of a broken mess the crew is, constantly bickering and never able to get anything done... until they survive scrape after scrape by working together, utilizing each person's unique knowledge, talents, and skills. This stronger conflict makes their eventual cohesion all the more satisfying.

With our Person vs. Self conflict established, the next change comes naturally: design your characters to best highlight that conflict.

The Person vs. Person focus of the film didn't know who its characters were, resulting in their horrible mishandling. You can see it in the film's over-use of tired tropes (a “Sociopathic Soldier”6 was “Evil All Along”7 and “Only in It for the Money,”)8 and the head-scratching 180's the characters perform repeatedly. One minute, they're the mentor. The next, they're a villain with confusing and ill-established motives. And then they're... redeemable after all?

But with a Person vs. Self conflict established, we know to design the characters with clearly established motives and room to grow into their character arcs.

I actually find most of the cast just fine as they are. There are only two key characters I would have changed.

Cale's motivations are unclear throughout the film, which contributes to his confusing shift in attitude (from “I don't care what happens to humans” to “I'll give my life to find humans a new home!”). I can only assume this was to give Cale a reason to reject the quest at the beginning of the film.

But there was no need to make Cale a reluctant protagonist. He clearly feels his father abandoned him, but he takes it out on all of humanity, essentially saying, “Nah, you guys can all die even though I have a map in my hand to build a new home for you.” This is one of our first impressions of Cale, and it makes him seem painfully immature. No humans ever did anything to hurt Cale (unless you count his dad leaving with Project Titan to try to save humanity). By contrast, he has every reason to be prejudiced against aliens given how poorly they treat him. 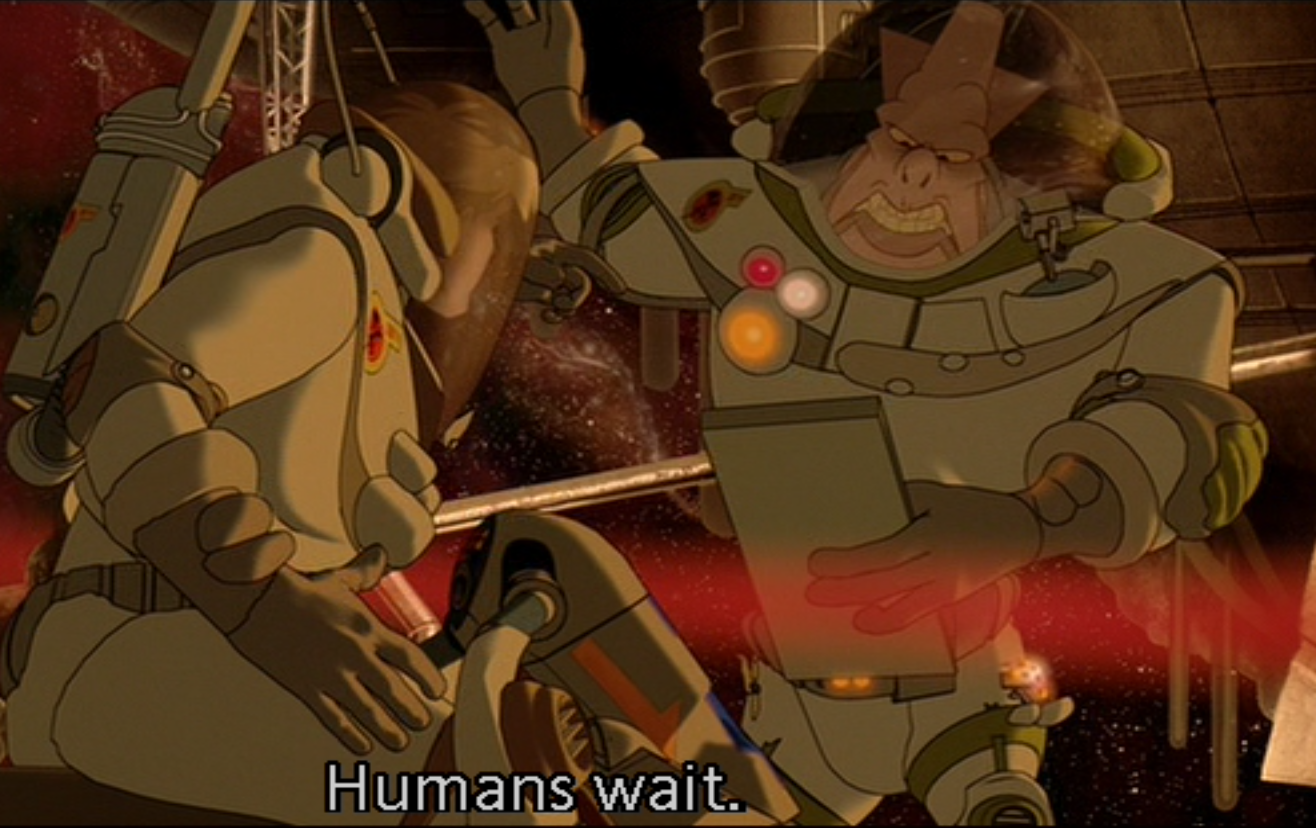 I'd have had Cale instead go through something that explains why he hates humans even more than the aliens that make his life miserable. Have him blame humans for Earth's destruction (“If they hadn't been war mongers, maybe their planet wouldn't have blown up”). Have him share this philosophy with the Drej! This gives Cale a reason to butt heads with Korso, who's the voice of reason, arguing that humanity deserves a chance to survive. And when Korso can't quite get through to him, Akima can. Cale and Akima's budding romance (which needed far more time to develop), coupled with him seeing Akima's colony, would eventually help Cale realize how destructive the Drej's anti-human philosophy truly was, much as it tries to in the original film.

Korso (and Preed) should have never been villains! Their villain reveal is riddled with problems. It had no lead-up throughout the film; it came out of nowhere. It made no sense based on Korso's prior actions. The actual reveal was ridiculous, contrived, and anticlimactic. And what's worse, they even invalidated the whole thing when they tried to give Korso a redemption arc at the end. But I guess at least he gets offered a chance at redemption. Preed isn't so lucky, despite Korso being the mastermind of their betrayal.

The entire villain reveal proves that the writers did not solidify who Korso was. Instead, they made him whoever the plot needed him to be. But if we change the conflict to Person vs. Self, Korso's initial characterization is exactly who he needs to be for this story.

Before Korso's villain reveal, he's nothing less than a great leader for his motley crew. The others respect him as he keeps them on task. We have no reason to believe he's anything but genuinely concerned about their wellbeing. He and the crew have some great chemistry, which is why it's such a shame when the villain reveal happens and he abruptly becomes a threatening, ranting dictator with no discipline over himself or his crew.

But in our Person vs. Self conflict, Korso would remain the respectable leader. This would only make the aliens' respect for Korso even more impressive, highlighting how good of a leader Korso must be and even creating some delightful irony. I can just picture Cale complaining why they have no problem showing Korso respect, leaving one of the aliens dumbstruck by the revelation that Korso is also a human. This dynamic of the crew faithfully serving under Korso would serve as a glimpse into the crew's growth potential, emphasizing that these characters can indeed overcome their differences and bond with one another if they only give each other a chance.

In addition, Korso makes a perfect mentor for Cale. In fact, Cale's father, Professor Tucker, spent some of his last moments with Korso. It makes sense then that Korso is the one who finds Cale and teaches him that humanity is worth fighting for. 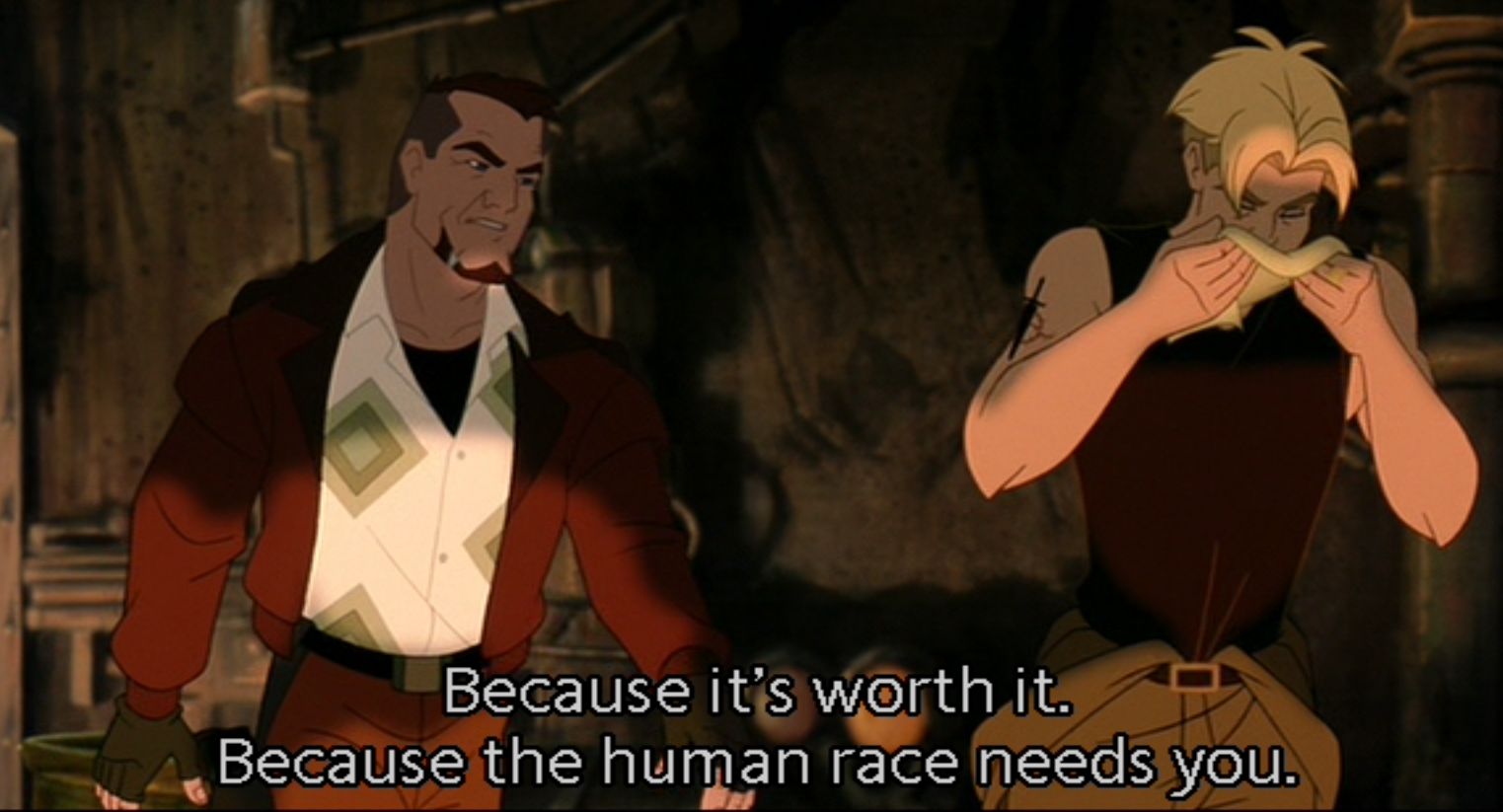 What doesn't make sense is how the film makes Korso into a traitor, selling Cale out for a quick buck. What doesn't make sense is Korso, the man who convinced Cale that humanity deserves a second chance, bellowing that he's believed all along that “Humanity is washed up!” Korso's villain reveal is not only nonsensical; it robs us of the genuinely heartwarming and well-written scenes between Korso and Cale, rendering them meaningless.

Titan A.E. already had a lot going for it. Its premise was interesting, its setting was a unique take on space operas, and its cast was incredibly likable. It would only take two changes to take this mess of muddied plot twists and tangled character motivations and work it into something classic and truly heartwarming: a story that reminds us that no matter how different people look on the outside, we can all learn to understand, respect, and care for each other.

---
Notes and References:
All photos property of their respective owners and used under US “Fair Use” laws.