How I Name Characters, Part 2: Word Associations Are My Friend


YOUR CHARACTER NAME NEEDS TO BE PERFECT—

—claims the internet, and I can already feel my heart rate rising.

“[The name] has to suit the character’s personality, makes [sic] sense for the era and, most important, be super awesome...” Oh, and by the way, “[y]ou need a name that ‘fits’ your character too” (Klems).

I’m already feeling overwhelmed. Anything else I need to consider? Oh, I know. How about rising anxiety, crippling uncertainty, and heck—throw in the kitchen sink. Or maybe the towel.

You’d think names make or break a narrative with this kind of advice.

Sure, finding the right name for a character can be hard, even without the crippling insecurity and perfectionism. I used to get stuck writing stories because I was too busy agonizing over how hard it was to come up with good names.

But I don’t suck at it as much as I used to. That’s because I’ve learned more than just one trick on how to generate cool and clever names. Yes, methods besides over-analyzing the character’s first initial.

Sometimes I’ll be lazy and search by name meaning on my trusted companion, Behind the Name, to find a meaning that relates to the character. This is bread-and-butter advice for writers; it’s a quick and easy way to express who the character is.

For instance, I once named a character Cailen—an embarrassing misspelling of what was supposed to be Cailean (Memory problems. What ya gonna do?). Cailean is a Celtic name that means “whelp” (Campbell, “Cailean”), another word for a young puppy. Since “whelp” is often used as an insult (implying an inexperienced child), it fit the young, naive, inexperienced Cailen perfectly. 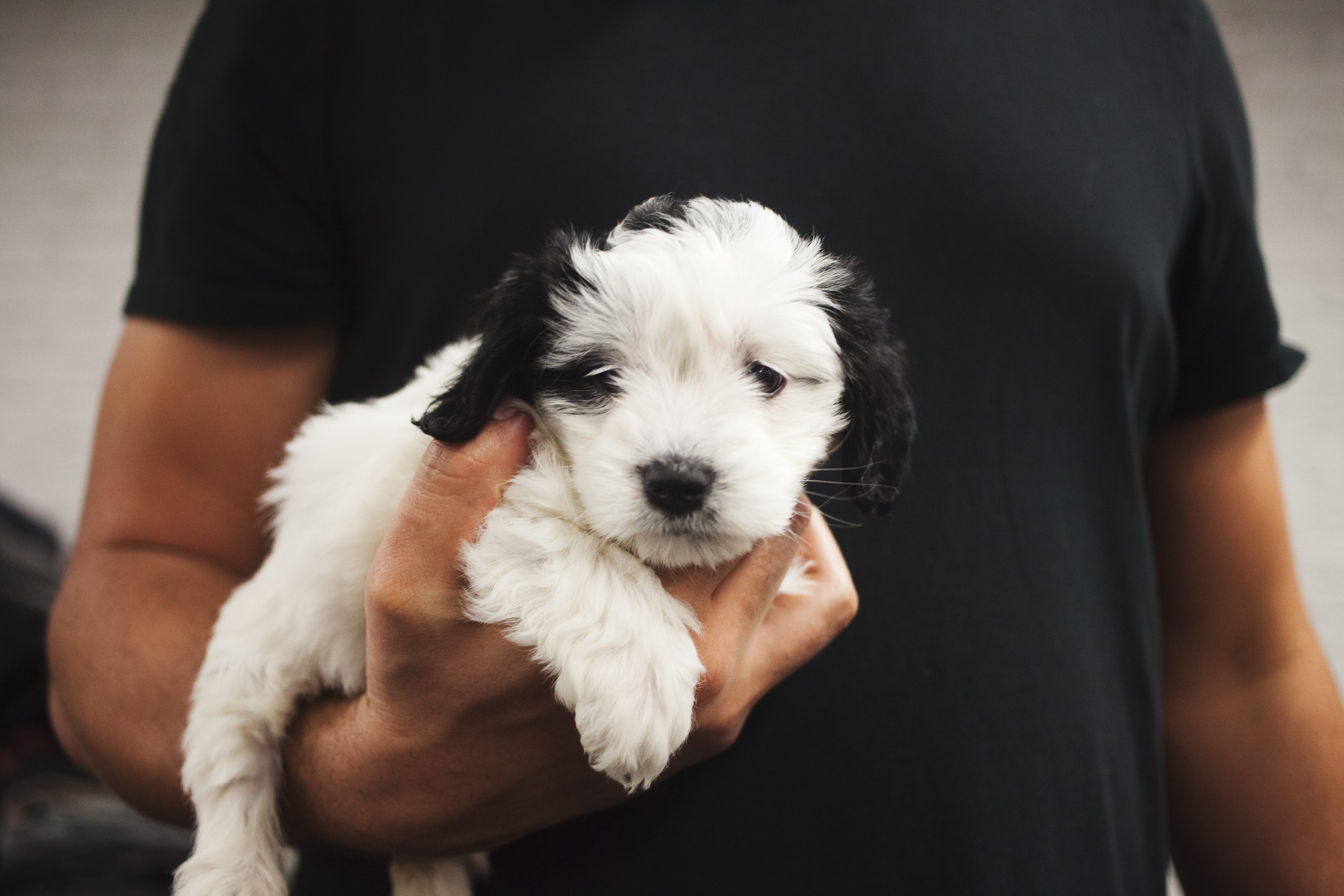 He’s also the kind of character who makes you go, “Awww”

I like this trick because it works whether a reader knows the meaning of a name or not (Writer’s Relief Staff). Consider the following names, which sound as strong as they mean: Berk (“solid, firm, strong”), Jarek (from yaru: “fierce, strong”), or Magni (from magn: “mighty, strong”) (Campbell, “Names with ‘Strong’ in Meaning”).

And for those few times readers do know the meaning or even take the time to look it up, it’s pretty satisfying for them. I always feel like the author just shared a little secret with me. And who doesn’t like that?

Best part about this trick? Using it ironically. Remember my antihero criminal Cassius? His full name is Cassius Naevius Flavius: a fancy-sounding name that roughly translates to “vain man with a mole on his body” (Campbell, “Cassius”; Campbell, “Nevio”). Obvious jokes aside, the name highlights Cassius's tragic irony: he vainly struggles to rise above society’s labels and laws, while that same society keeps him in his place by refusing to see who he truly is or could become. In other words, they take him at “face” value.

If I want to imply a name’s meaning rather than stating it, I might modify a preexisting word and use that as a name.

Long before I had exposed myself to Harry Potter and good old Remus, I had a character with a wolfish disposition whose name was also Lupin—the word lupine (“pertaining to or resembling the wolf”) without that pesky final e (“Lupine,” Dictionary.com).

I’ve also had fun with portmanteaus, combining two or more real words to form a name. For instance, if I wanted a character to evoke the image of both a bear and a wolf, I might make the character’s name Beolf.

Maybe that’s why I always imagined Beowulf as a huge, muscly, shaggy-haired guy…

...For inspiration, of course. What did you think I meant?

I’ll start with a preexisting base word (or name) that captures the essence of what I’d like the new name to sound like. This method is pretty similar to the previous one, only this time, I pay more attention to how the base word sounds and less on what it means. This usually gives the name an even more subtle flavor.

I used this trick while coming up with a villain name recently. I started by assembling a pallet of words I liked: requiem, nocturne, and nocturnal. I wasn’t planning to directly reference these words’ definitions; I just liked how they sounded, so I used them as a base to begin my brainstorming...

...And my imagination took it from there. 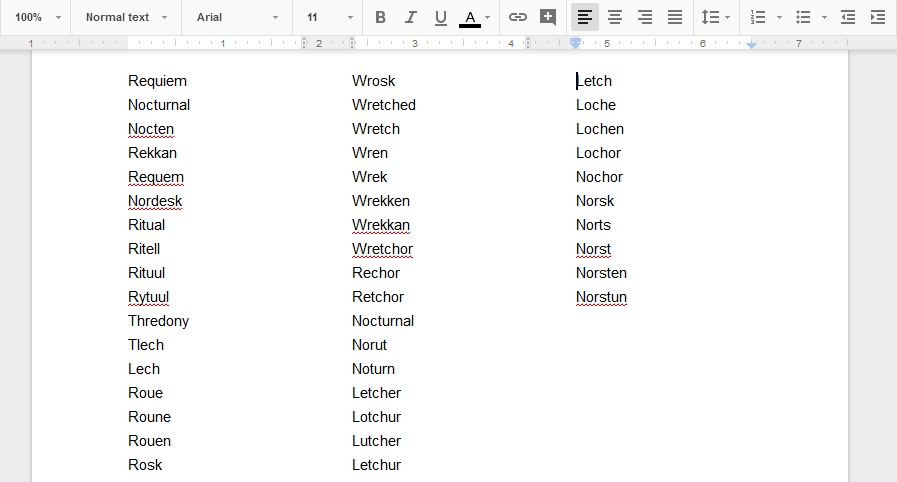 Put It All Together

Regardless of the method I’m using, I’ll start by opening a new document and type out any inspiring words. As you can see with Nocture's brainstorming session up there, I’ll experiment by taking out syllables and adding new ones in. Sometimes I’ll toy with alternate spellings too. If I like the direction a certain name is going, I may tinker with it a bit longer, exchanging some syllables for more new ones.

In the end, I’ll have a long string of names and one winner, which I’ll use for the character I’m currently working on.

What about the other dozen or so names I’ve just created? I’ll save them for the future, either to use as-is or to serve as inspiration for a new brainstorm.

For instance, after I’d finished Nocture, I needed a second name. I liked the mystique Nocture’s name evoked, and I particularly liked one of the names I’d made during the Nocture brainstorm, “Nocten.” That name also brought to mind Prince Noctis from Final Fantasy XV, which was an appropriate connection, since my character was also a noble.

So I had “Nocten” and “Noctis,” but I knew it needed a little more. The final piece came in the form of a friend’s character, Nicht. I loved the sound of that hard “-cht” and knew it’d be the perfect addition to my new character’s name. In the end, I added the “-cht” to Nocten, making his name Nochten; “Nocht” for short. (After all, “Noct” is already taken. :P)

Regardless of what trick I use, creating names can be a long and arduous process. Still… I kind of have fun coming up with new names.

Which is a good thing, ‘cause I’ve got at least seven characters in TVB who need new names right now. And that’s not counting all the characters who remain nameless.

Hoo boy. Best of luck to all us namers out there.