All Yona wanted was to marry the man she loved. But with one sword strike, she loses her love, her family, her throne, and her home. 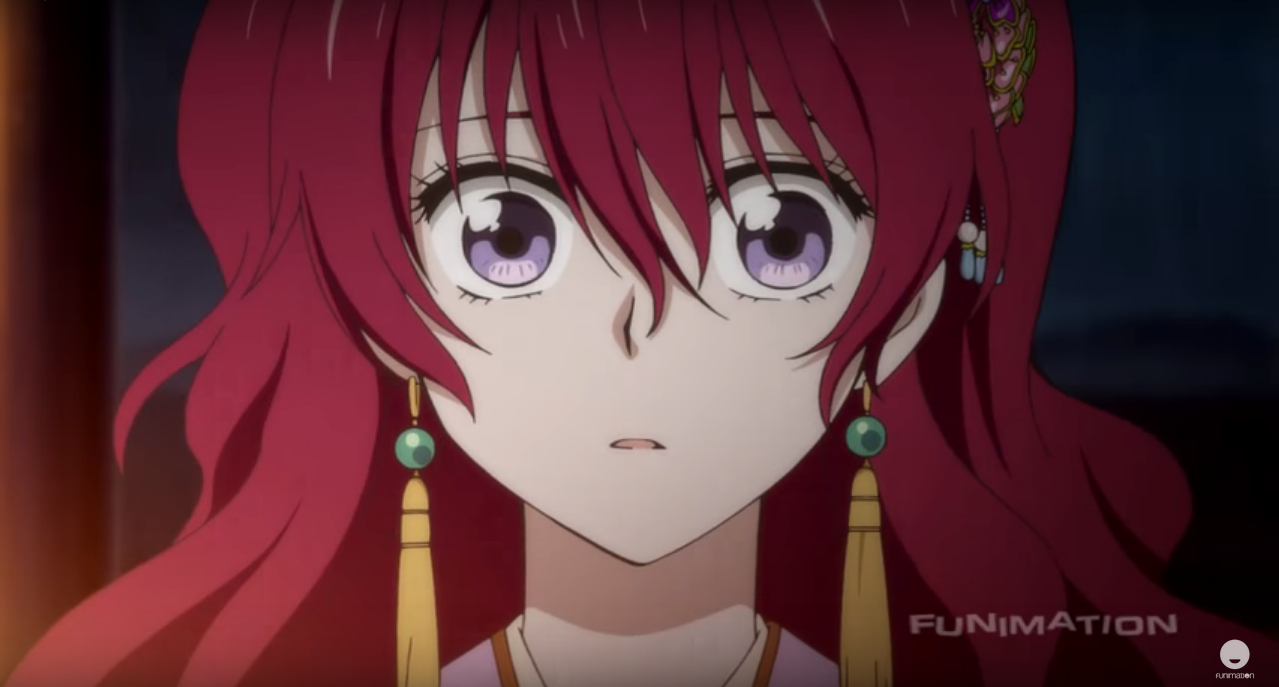 Yona's sixteenth birthday bliss turns into a life-or-death flight in the wake of a deadly coup. Her only companion is her sole surviving loyal retainer, General Hak. As she's hunted in her own kingdom, Yona struggles to make sense of the chaos her world has become.

But as the fog of her trauma begins to clear, Yona discovers the resilience and love of her people. And it's these people that turn her disaster into determination: she's going to take back her to make it a safe place for these people.

I love Yona of the Dawn. And if you like medieval fantasy, exotic cultures, political intrigue, charming characters, and gorgeous scenery, you might too. 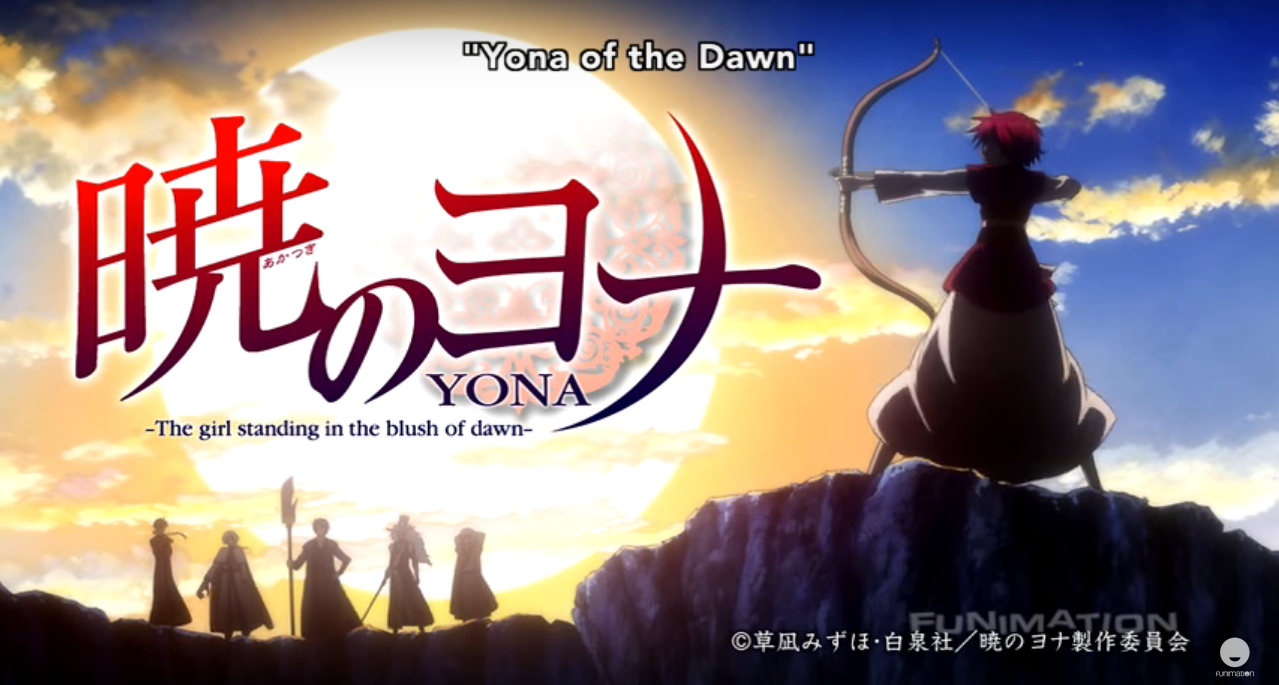 This show is gorgeous, and the character designs are lovely. Each of the main cast is designed with complementary jewel colors, telling you exactly who belongs in the main party at a glance. 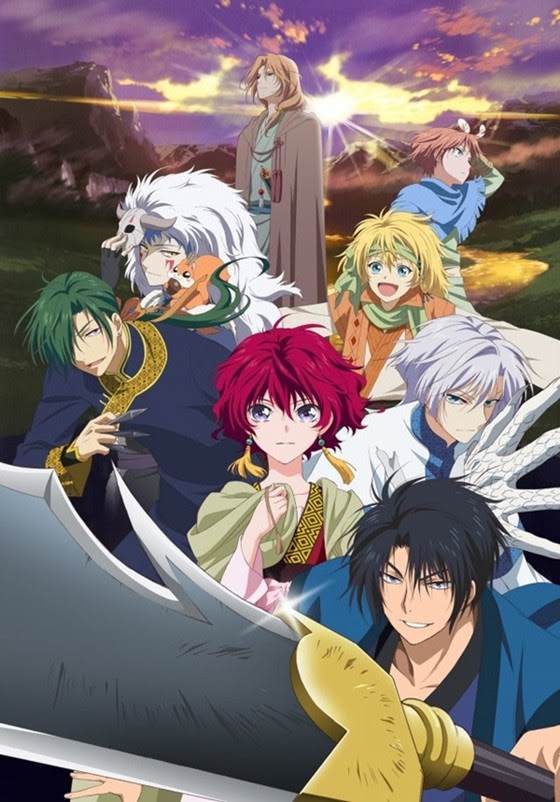 The backgrounds are colorful and vibrant while remaining realistic for the largely untamed landscape of a medieval-era kingdom. There's also plenty of variations between the looks of each locale that Yona visits, keeping things feeling fresh and new.

If you're someone who likes...
...This show might be for you.

If you're someone who likes political drama, this show's for you too.

If you're someone who likes mythic fantasy, this show is also for you.

Yona manages to get all these incohesive genres to not only play nice but work well together. This is a show that sets your expectations only to thwart them for hilariously entertaining or surprising effects. And I have no idea how it pulls this off so effortlessly. Though I know that its excellent worldbuilding, lush backgrounds, and exotic soundtrack certainly help make this kingdom feel as plausible and realistic as it is fantastic, you want to know where this show really shines?

This show's colorful character designs don't just help set up the world; they're a delicate balance between something that feels historically-inspired and still adorably anime. You don't feel pulled out of the moment whether the characters are in an intense fight... 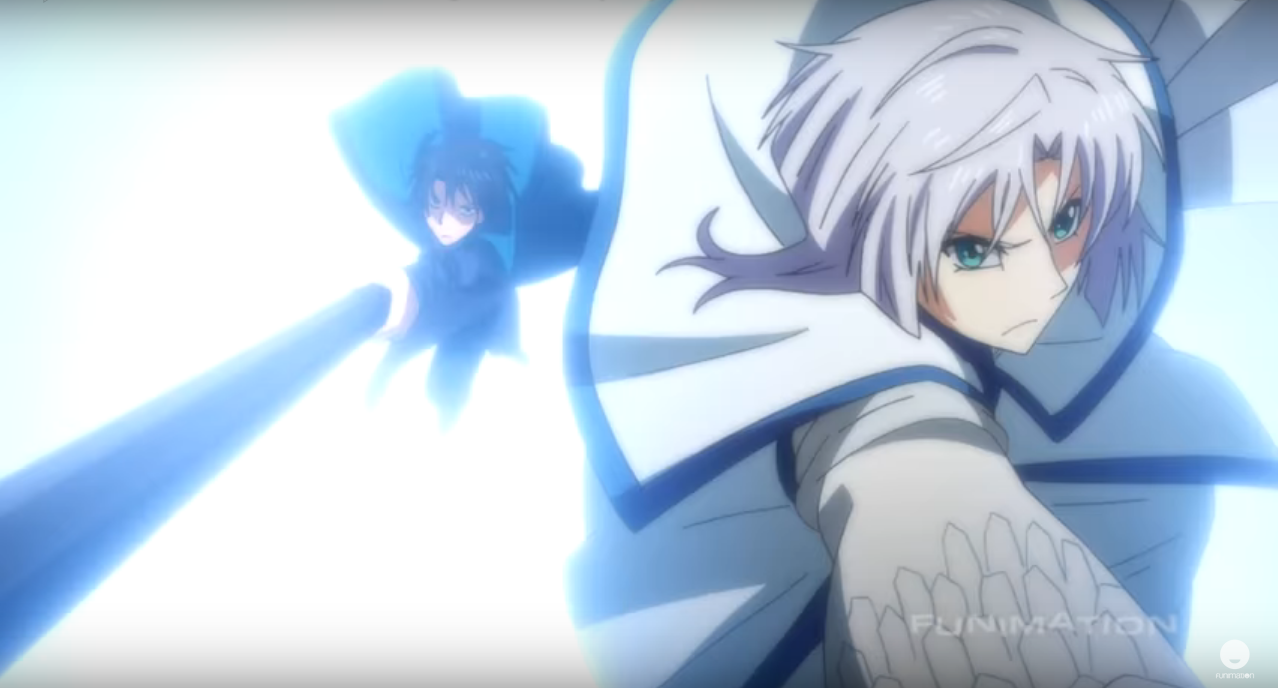 ...or if they're just ribbing each other in chibi form. 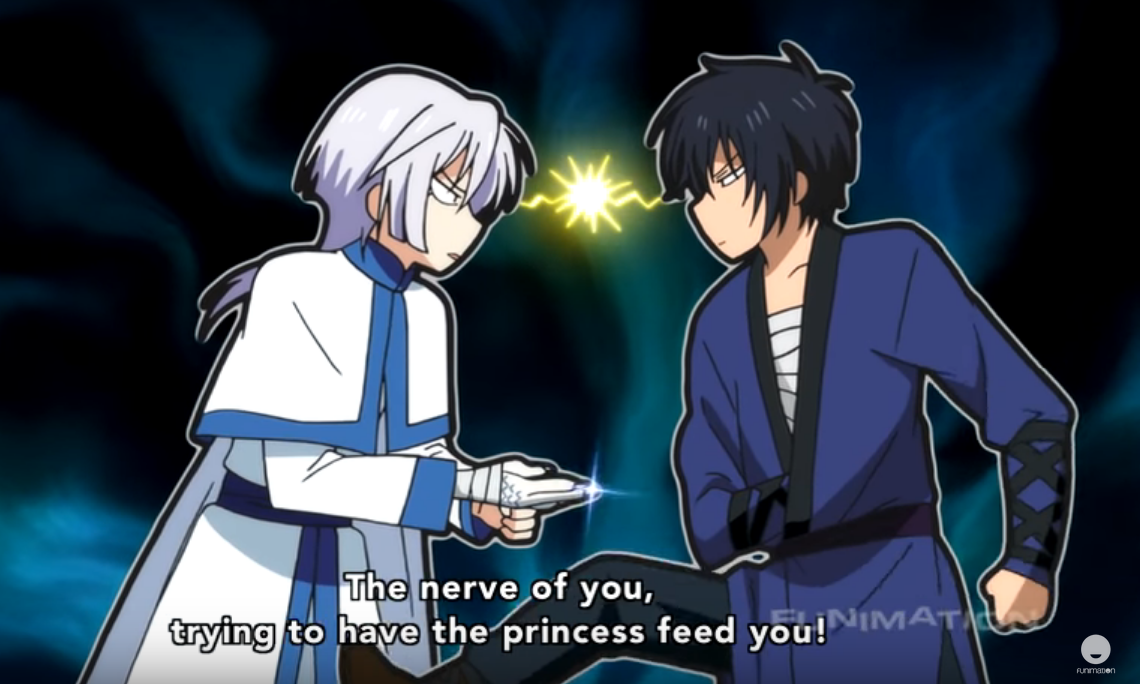 And the characters play off each other well regardless of the situation, which only enhances their “d'aww” factor. There's so much variety among the main cast that there's bound to be a character you'll end up falling for.

Are you into the protective, earnest type who seems stiff before some coaxing reveals their true cinnamon roll nature? This guy's your man. 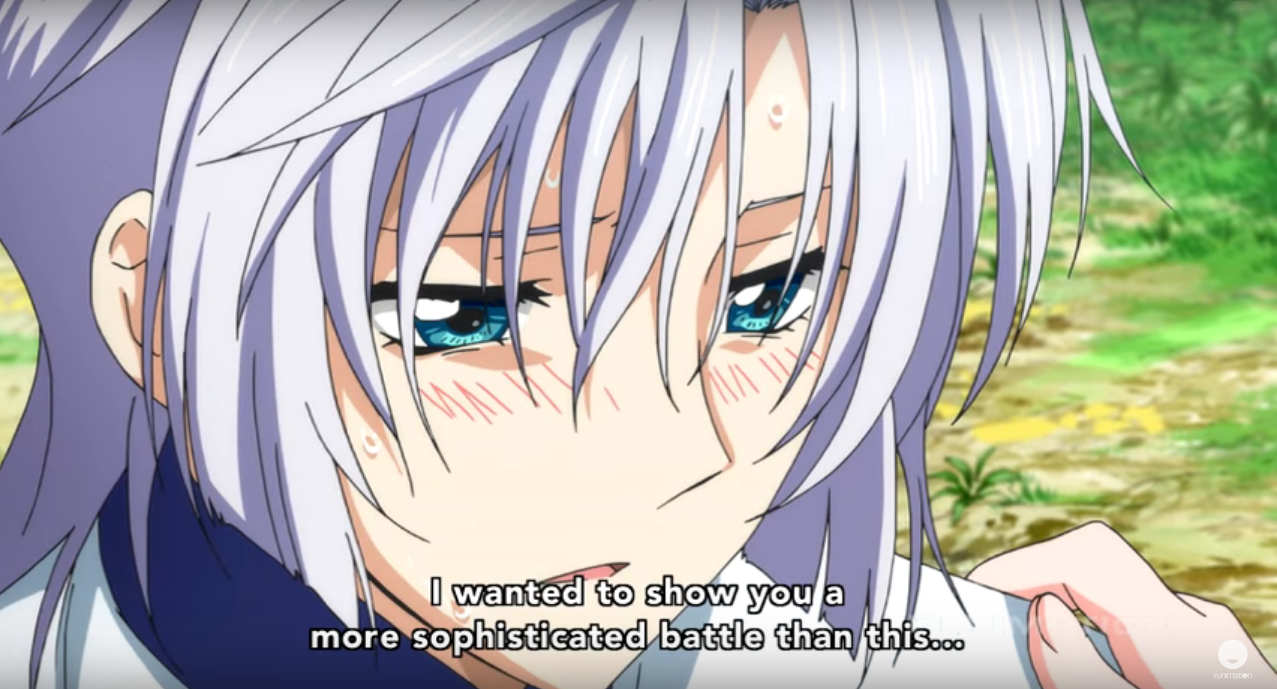 More interested in the quiet, intense, and painfully socially-awkward ones? Check out this one. 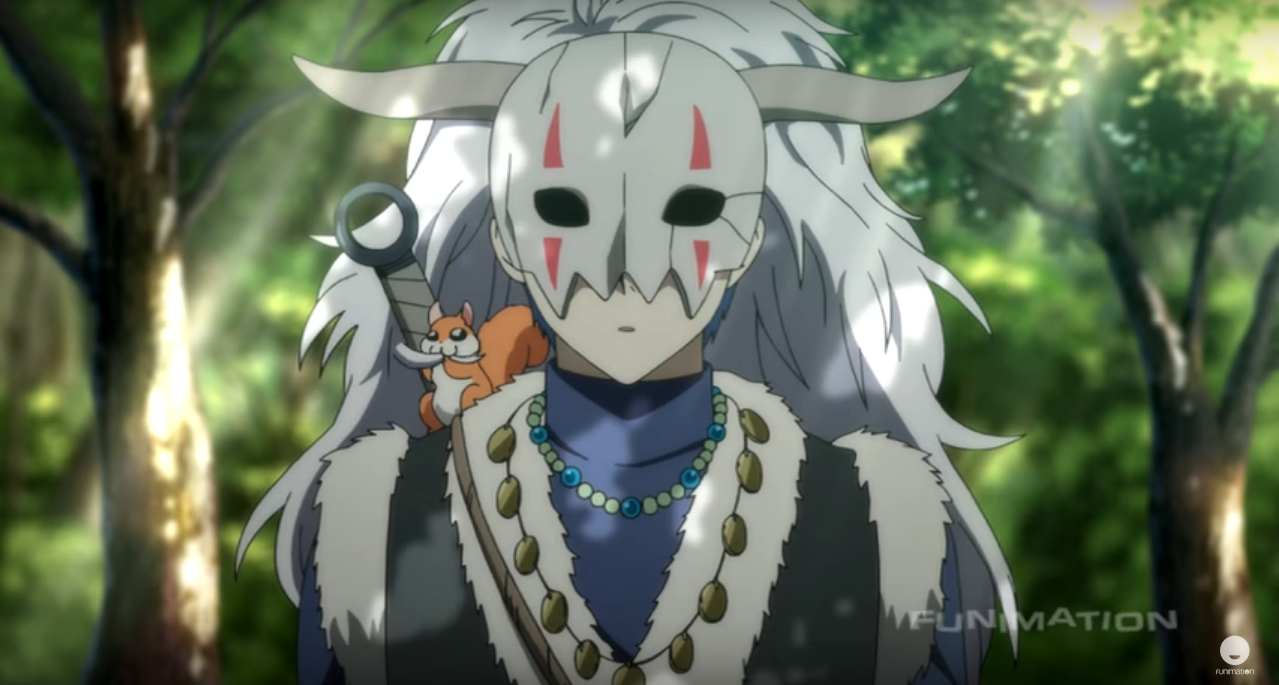 More into the boisterous, flirty ones who could stand toe-to-toe with the Jack Sparrows of the world? Meet this guy. 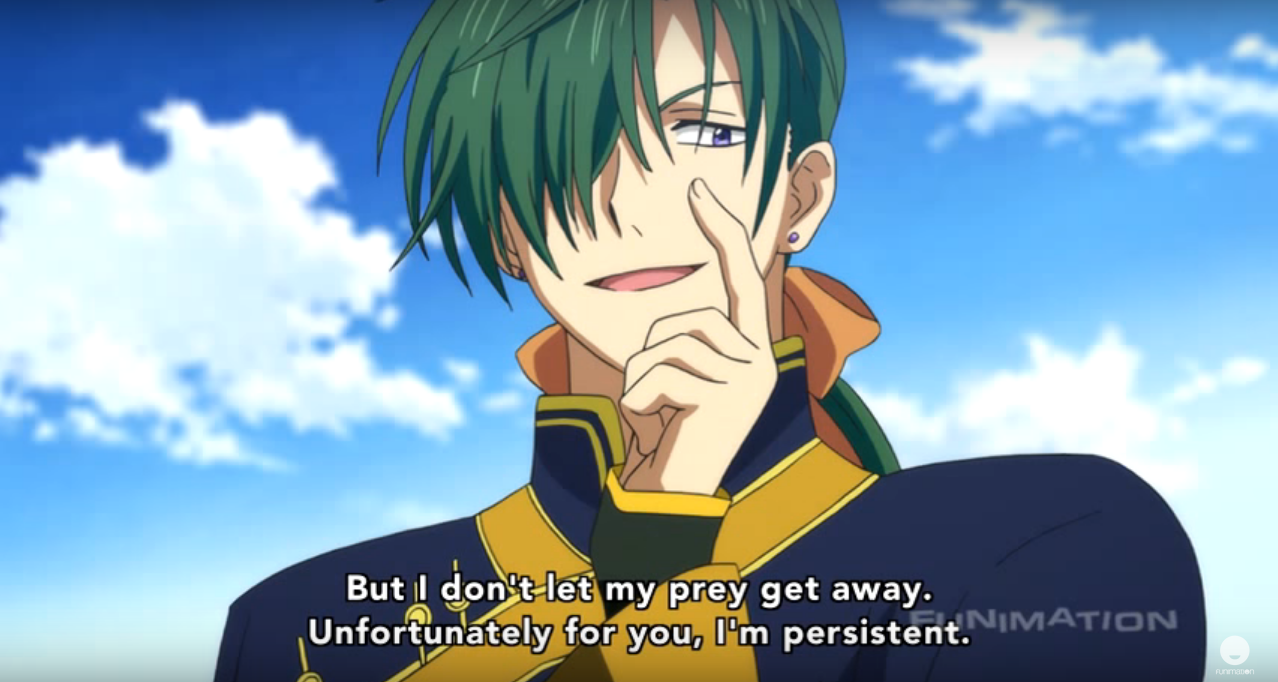 Or maybe you just need some more adorable, bubbly, wise-beyond-their-years people in your life. This one's for you. 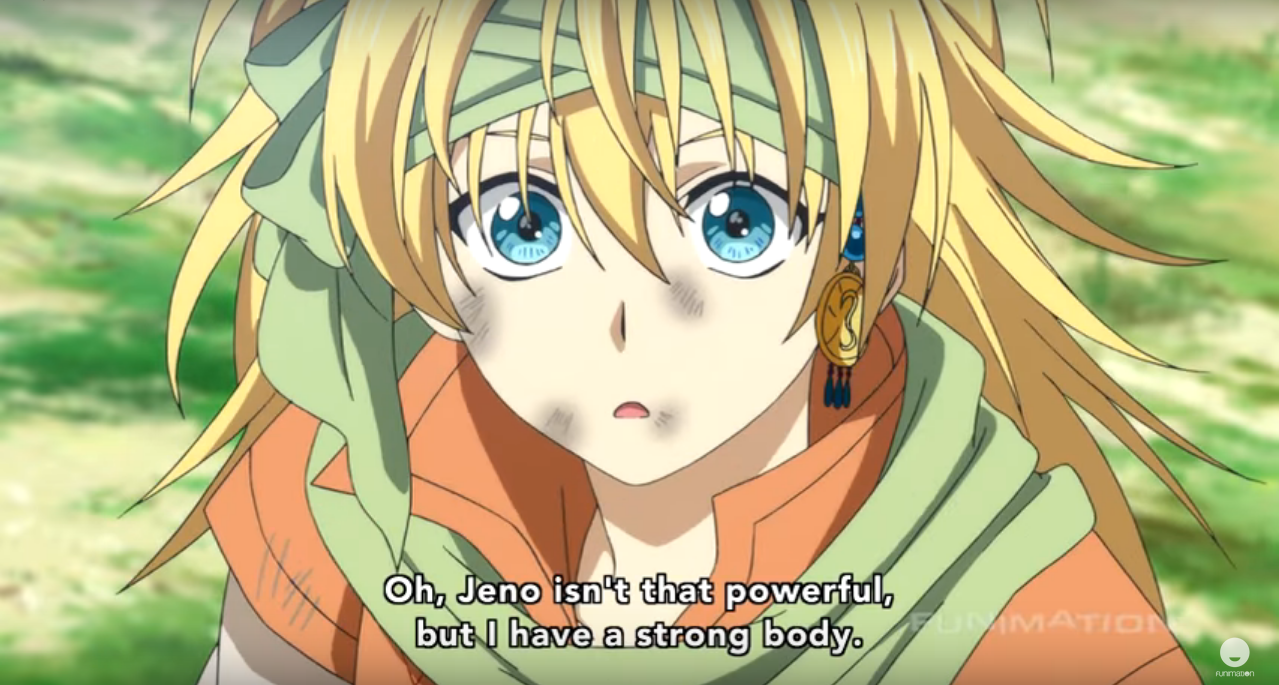 Granted, these guys don't have as much time to change and grow over the course of the series. But if you're like me and really want to see some character depth and growth, all you have to do is look to this show's two stars: Yona and Hak.

Now, I've already told you a good deal about Yona's story, and for fear of spoilers, I'll just leave it at this: Yona's transformation from spoiled princess to powerful woman is perfectly paced and intensely satisfying. If that's your bag, give this show a go.

Hak doesn't change so much over the course of the series, but he's one of those delicious characters who is so much more than what he initially seems. If you're into characters who seem aloof and goofy while still being able to skin you as quickly as look at you, Hak's your man.

And that's not even getting into the romance in this series... But I think I've said enough for now. ;)

There's so much here to enjoy during the ride, plus the promise of things ahead: such as the mysteries surrounding Yona's family, the legend of the dragons and its implications for later in the series, and--of course--adorable rom-com moments.

Best of all, it's currently available to view for free on Youtube. Buyer be warned though: this is the first and only season of the anime, so the ending is a little jarring. Hopefully we'll see more of this anime adaptation in the future.

---
All photos property of their respective owners and used under US "Fair Use" laws. Unless otherwise specified, all are from Funimation's official YouTube channel.

Yona of the Dawn and all related names and terms are the property of HAKUSENSHA.

Interested in reading more about anime? Check out Drunken Anime Blog for some fun analyses. Of course, as you can probably tell from the title, this may have content not suitable for little eyes. Or your eyes, if you're sensitive to alcohol, sexual content, etc.