WARNING: The following content may not be suitable for young readers or audiences sensitive to violent content.

A concussive thoom rumbled in the distance, followed by a telltale hiss.

She latched onto the first thing within reach—Monroe’s arm. She squeezed so hard her nails dug into his flesh.

But she couldn’t hear him complain. She couldn't hear the horrified shouts of her fellow Caders or the barking of the soldiers in the gatehouse overhead.

All she could hear was the hissing of Vaerin machinery, like a dragon from fairy-tales, about to burst from the forest behind them.

Monroe didn’t shake her off. He was frozen solid too.

And then, a burning ball of fire tore its way through a tree's crown, arcing over the grassy knoll. Aiming straight for them all.

But Mara was still frozen. No. Please, no. Tears gathered in her eyes. Please don't let it end like this.

More dimly than her dreams, she felt Monroe grab her around the waist. Her body slammed into the gate; suddenly, she was suffocating. She couldn't breathe. She was being crushed.

So this is what it's like to die, Mara thought as she closed her eyes. And we were so close.

Only then did she realize that Monroe was shielding her with his body, pressing her against the gate. And then an overwhelming wave of pressure and heat slammed into her, and she really couldn't breathe.

White light engulfed her, and she was breathless as well as blind; but it only lasted for a moment. As the light died down, Mara felt like she could breathe again... only to swallow a desperate breath of air tinged with the smell of smoke and burning.

Monroe released her. As if her ears were full of water, she could only vaguely hear Monroe and Ian screaming.

Monroe broke away from her, waving his hands in the air. He was headed for a ring of fire only a three meters away from the gate, a ring of fire that surrounded the blackened crater where the Vaerin fireball had hit.

“Don't let the fire get on you!” Monroe was shouting. “Don't let it spread! Drop to the ground or roll against the wall to try to douse it!”

Of course she knew all this. She'd seen people die to the fire. They all had, hadn't they?

Well, now she'd seen one more. As she staggered to follow Monroe, Mara stumbled past a body lying face-down on the dirt. She couldn't even tell who it was.

Three people had caught fire from the attack, and they were all screaming in agony. One crumpled to their knees and was no more. One was rolling against the wall as instructed. The last was the oldest of their group, a silver-haired man they all called Hare. Erik and Alan were desperately trying to beat the fire off him with their shirts; Monroe rushed over to join them.

“Run!” Monroe yelled, turning to the rest of the shell-shocked group as they all watched in horror. “Get out of here! If you stay, you die! Save yourselves!” He tore off his shirt and began to try to help douse the flames on poor Hare.

But where can we run? Mara wanted to ask as she took a step forward, toward the heat and the dancing flames left by the Vaerin fireball. Where can we hide from them? There's nowhere. Nowhere...

A shriek from Ian shattered her stupor: “MAAAARAAA--”

His wail was cut off by the sound of another thoom and another ominous hisssss.


She almost didn't go down the alley; she could still hear her friends from university behind her, all making fun of her, saying she was going to get mugged in a run-down town like this.

“But it's Mara,” she heard one of them comment as she kept nosing down the alley, “so she has to stick her nose into things she has no business investigating.”

She ignored them, because as the group had been walking by, she had seen something halfway down that alley: a little bundle huddled under a ragged cloth and half-buried under a pile of rubbish. 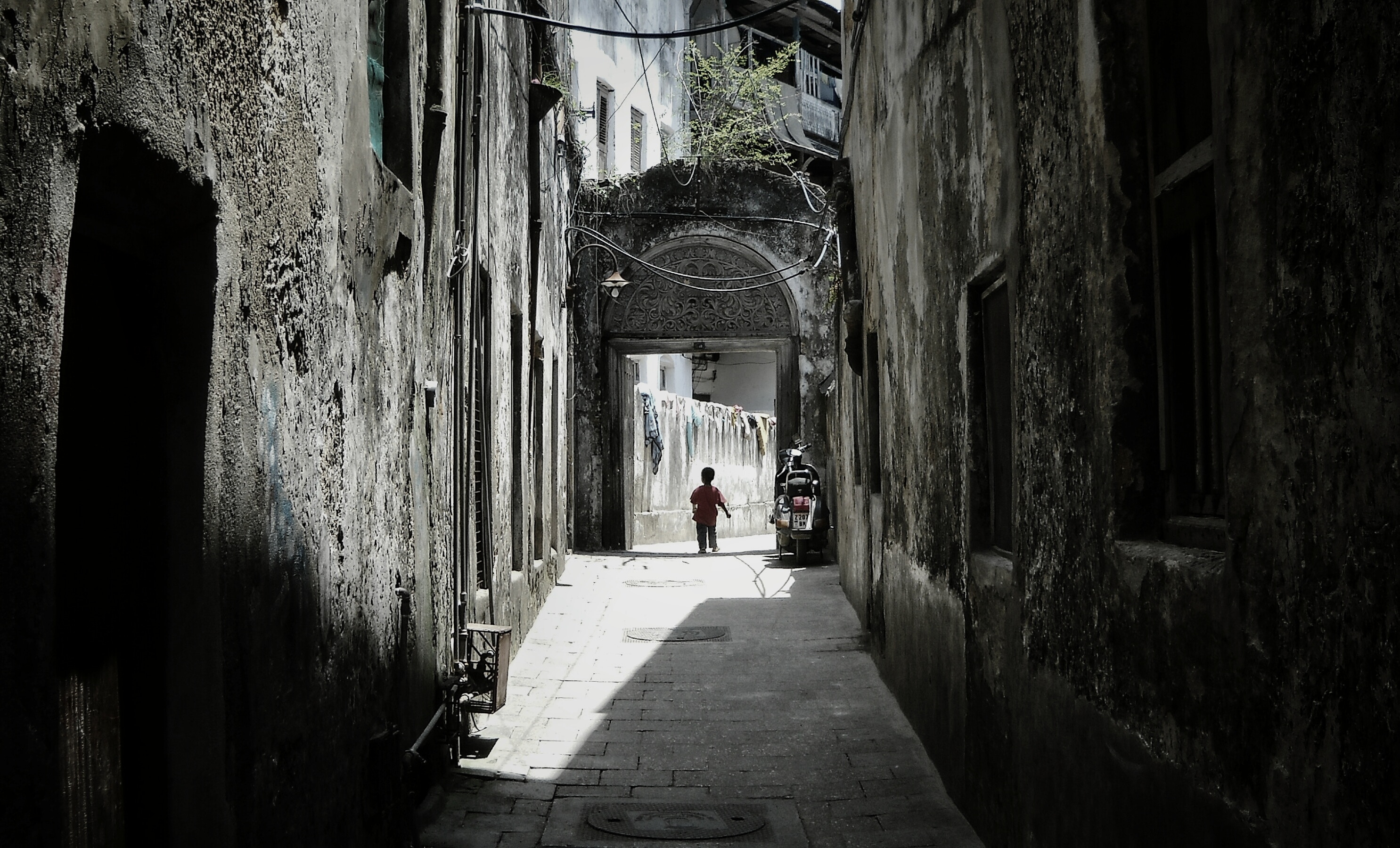 It was a boy, she discovered as she crouched beside the tiny bundle.

He peeked out from under his cloth blanket. His face was striped with dirt and tears. A little boy, and he couldn't be more than three years old.

“Where are your parents, little one?” Mara asked as she felt her heart breaking.

“Mommy and Daddy are dead now,” he said blankly. His face was a clean slate; emotionless.

Dear Adonai, she thought to herself, does he even know what he's saying?

But then the little boy's eyes hardened: a mixture of anger and then a flood of sorrow and all too much emotion for such a little one. "Vaerin killed them to get aether," the boy explained.

Her heart throbbed from the look in those eyes. “What's your name, little one?”

“Ian.” He looked up at her with his big, round eyes. And sorrow finally won over the anger. His eyes welled with tears that spilled over his hollowed-out cheeks. He held his arms out toward her, inviting her. Begging her.

Her friends were right.

She did always stick her nose into things she had no business investigating. And it always got her into trouble.

Mara crouched down, wrapping her arms around him. "I'll be your new mommy, Ian."

Mara staggered at the sound of the blast.

Her eyes hardened with resolve.

She took Ian's little hand, which was slapping her on the shoulder, trying to get her to wake from her stupor. She kissed Ian's tiny palm as her eyes followed the arc of the blinding fireball. It was almost painful to look at. But based on the projectile's trajectory, it would fall short of the gatehouse.

Mara spun on her heel and raced back to the gate, slamming her body and fists against the drawbridge. “Let us in!” she howled like a wounded animal. She didn't care how she sounded. “Let us in! Let us in!” she demanded as she pounded with each word.

The fireball hit, and Mara turned so she was between Ian and the concussive blast, like Monroe had done for her. But the power of the blast alone nearly plastered her to the drawbridge and crushed the boy all at once. Again she was deafened; again she was blinded; again she couldn't breathe from the power of the blast and the wave of heat as the fireball belched up flame that spread like nothing natural she'd ever seen.

How strange... Mara thought as she turned back to the gate, staring up at the gatehouse with tears in her eyes, that the Vaerin should kill us for using magic when they use it to power their war-machines.

Other Caders had joined her, pounding on the gate, weeping and wailing. They were desperate. They were humiliated.

They were being hunted down like animals. And soon they'd be roasted alive.

“Please...” Mara begged, throwing one last fist against the wooden drawbridge. But there was no answer, of course. She couldn't even hear the soldiers scrambling and yelling to one another any more. Had they all run away?

Had everyone abandoned them?

She rested her forehead against the drawbridge, lost to her sobbing.

Had everyone abandoned her?

“Toying with that kind of energy is far too dangerous...”

“I just wanted...” she whispered, “to find a world where you could live without fear.”

“Suppose your new worlds are real. Suppose the variations in aether levels really are due to aether overflow from one world into another—”

I want to find another world.

It would take a tremendous amount of energy and an extremely skilled mage. But it can be done. First, identify the area of highest aether concentration—

She knew this. She knew the signs. She knew how to find a high aether concentration, even without her instruments.


“Why are we in a run-down town like this, anyway?” whined a student. “This place looks beyond help, even for the Cader Royal Mage Academy.”

“That's because they were attacked by Vaerin,” another whispered.

“We don't know who did this. You can't just assume it was Vaerin,” Mara snapped. And she smacked her whiny classmate. “And don't say that! These people need our help!”

“Collecting excess aetherflow. We know,” another classmate sighed. “It's just... don't you feel like these extracurricular 'assignments' are somewhat beneath us by now? Why can't they have lesser schools take care of these situations?”

“Because the Cader Royal Academy specializes in training to handle excess aetherflow,” Mara replied. “No one else has classes on it; we're the only ones experienced enough to handle that high a level of aether. It might kill a lesser mage-in-training.”

“At least the levels are so strong we don't need our measuring tools,” still another classmate commented. “You can hear it humming.”

She could. And the closer they'd get to the point of the highest aether concentration, the more she'd be able to feel it tingling her skin.

But as her classmates continued to talk about the assignment, a little motion in the dark alley caught her eye...


Mara looked up through her tears. And for a while, she couldn't believe it. It had to be an illusion.

Caders shouted and wept all around her. More had caught fire. More tried to douse the flames. Monroe yelled for them to wake up and run.

Her hands shook; her skin was tingling.

“We're on the border of Torien,” she whispered. “The Vaerin haven't been through here with their war machines yet.”

They haven't been taking the aether away from this area.

And even over all the noise, she could hear it: the dull, low hum of a high aether concentration.