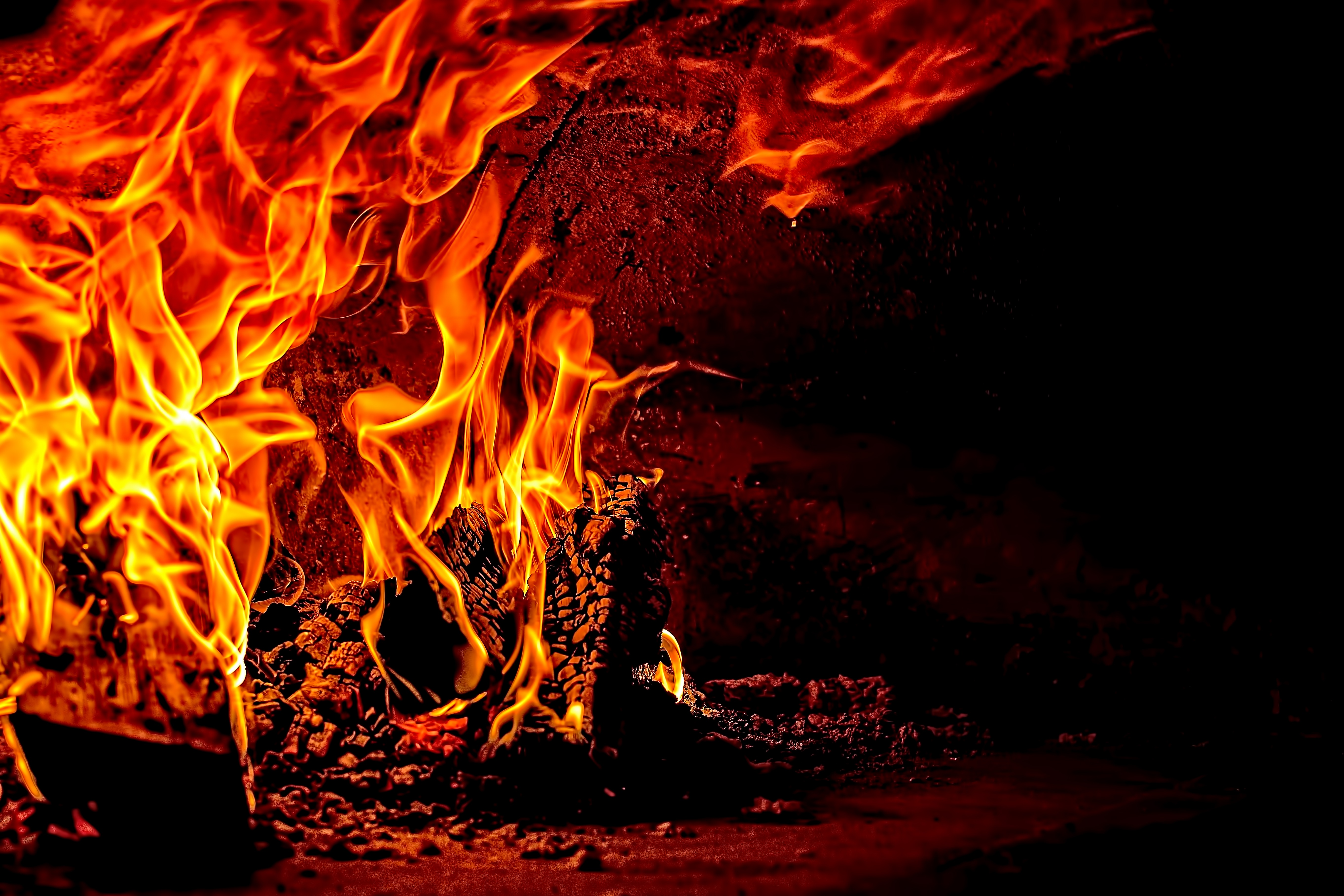 The chimney [sic] by Ricardo Gomez Angel on Unsplash

Why? What earned us this much violence?

A plume of fire burst through the black smoke at Mara’s left elbow. Close. Too close. Keep running, Mara.

She and Ian had made it to two safehouses so far. But each time they’d arrived at one, flames had crept upon the house within hours. Mara had no idea if the Vaerin knew her location and were aiming their flame-spewing war machines to trap her or if the bone-dry forest was doing all their work for them.

Still, she’d chosen the latter. At least she’d dictate when she died rather than wait to be burned alive.

They could have just taken our land, she thought as she shifted Ian higher on her back to relieve her cramping muscles. She pursed her lips, fighting back tears of terror and rage. But that’s not enough for them. They have to see us all burn, too.

Her lungs were searing, as hot as the forest fire she was just barely keeping ahead of. Her chest ached with every cough and her singed skin screamed with every step. It was getting hard just to keep one footstep pounding in front of the last.

From her back, Ian screamed a warning before she even felt a new gout of flame that reared just ahead. Mara’s hole-pocked boots skidded on the dry, dusty earth as she ground to a halt. Staring into the dancing yellow flames, Mara felt her horrified heart miss a beat. Had Ian warned her a split second later, they would both be falling headlong into the fire.

Mara spun on her heel.

If only there were aether here. If only I could manipulate these fires.

But there was no more aether. The Vaerin conquerors had drained it all just before they’d begun marching onto the Caders’ land.

They’re using our aether against us. The irony had never slipped her mind. The Vaerin are using the source of my people’s magic to exterminate us.

Mara felt the oppressive heat pulsing behind her. Flames arced roughly east on her right and north from behind, from the direction she and Ian had come. There was only one gap in the flames to her left side, to the west. But that was likely where the attacks were coming from.

Ian whined another warning. The new flames from behind must have been licking against his skin: she could smell freshly-singeing hair.

“Hold on, Ian!” Mara cried. She tilted, turned, and staggered west, bent double from the heavy load of the five-year-old boy on her back.

Her only hope was that the southern fire ended before she encountered the Vaerin fighters. She could go around the new line of flames and continue south.

South, the direction of the next safehouse. South, the promise of relief from this burning smoke that was killing her lungs.

South, just out of reach. Mara ran parallel to the southern line of fire, but it stretched on as far as she could see.

She wove between the blackened trees. Years ago, she’d seen a tree struck by lightning that’d looked much like these. But that’d been one single tree; this was an entire forest of charred trunks and stumps.

“Mara…” Ian mumbled pitifully. He coughed twice. Then he released her arm to try and cover a third cough. “How much longer?”

Mara dared a glance over her shoulder. Ian’s blue eyes shone out of a pool of ash-smeared skin. Two tear streaks and a trail of mucus made lines down his face to the corners of his mouth. She wondered if she looked as filthy as him.

Was this all they were? Two soot-blackened specters racing between pillars of charred bark?

“Fifteen more minutes. Hold on a little longer,” she urged, though really she had no idea how much longer. She’d lost her sense of time shortly after The Magus had sent them away. He’d hoped to keep them ahead of the Vaerin attack.

Only a quick glance to her left told her that the line of flame was not letting up in fifteen minutes.
Ian coughed violently against her shoulder.

“Please, Adonai—” Mara found herself breathing a prayer to a God she hadn’t believed in for two weeks—not since the Vaerin first began to round up her fellow Caders for routine executions. Please, Adonai. Do what you want with me, but get Ian to the next safehouse. Her eyes flooded with tears.

What makes him so special? slammed the thought against the walls of her mind. Why would this little boy on your back matter to an unmoving God? What makes him any more special than the corpses you saw the Vaerin parade through the city square as they proclaimed they were our new masters?

“Please, Adonai,” Mara breathed again. I’ve believed in you this long… Surely it couldn’t be for nothing? “You’re our only hope of getting out of this alive—”

A sharp crack pierced the forest, followed by an ominous creeeeeak. Mara whipped to face the sound and saw its source immediately: a tree to her left had taken too much damage from the southern fires. It was tumbling toward her.

Mara and Ian both shrieked. She threw herself backward, trying to cover Ian’s head with one arm.

The smile of her mother. The Magus’s deep voice, his lips brushing against her own as he told her to run.

The taste of his tears. It all flashed through her mind faster than it a gasp.

Mara’s back hit the hard ground. The tree landed with a boom that shook her core.

As she relaxed her grip on Ian’s little body, Mara pried her eyes open. She and Ian were unhurt. Propping herself up on an elbow, she took in the scene, eyes wide with disbelief.

Twigs scraped against her trousers. The bulk of the tree’s nearest limb lay maybe a few centimeters away from her feet. But they were untouched; just a few loose blackened twigs decorated Ian’s hair. She resisted a matronly urge to pluck them out.

But Mara had also noticed something even more important: the tree trunk had stamped out a section of the southern flames, forming a bridge just wide enough to safely cross.

As she scrambled to her feet, fresh tears leapt into her eyes. Thank you.

“Fourteen more minutes?” Ian asked as he clamped his arms around her neck from behind.

Mechanically, Mara looped her arms under his legs and hoisted him back up. She nodded, blinking the tears and stinging smoke away. “Fourteen more. Keep your head in my shirt as much as you can, Ian.”

She felt his head waggle in a nod against her back as she clambered onto the log and edged her way across.

Flames burned angrily on either side. She kept her arms out for balance, forcing herself not to imagine falling in and Ian burning.

The flames’ heat licked at the sweat coating her palms and arms. She felt like she had to hold her breath, but that would only make her dizzy. She kept breathing.

Mara’s feet hit the dirt on the opposite side. A peek backward revealed the yellow fire was already starting to lick up the fallen trunk.

Mara forced a grin through her tears. She pressed a kiss to one of his little hands. “Let’s see if we can make it ten.”

Was that you? Was it really you, even after everything that’s happened?

Are you really there?

There was no reply; only the flames crackled.

As her legs shook with terror and gratitude, Mara staggered onward, heading south.