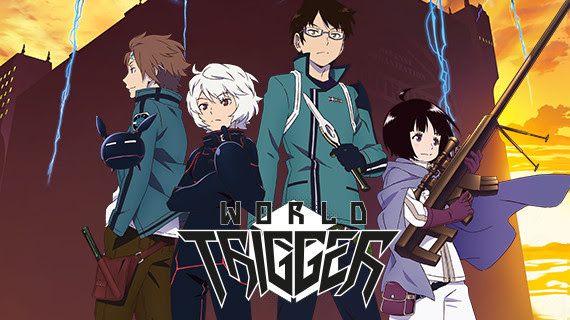 In a near-future Japan, Earth has come under attack by bestial, bio-mechanical aliens known as "Neighbors." The only force that's been able to go toe-to-toe with Neighbors is the Border Defense Agency. They've developed a way to draw Neighbor attacks into fenced-off evacuated areas, keeping civilians away from the fight. It's a solid strategy... but not foolproof. Young Osamu Mikumo finds himself in one of these "forbidden zones" in the middle of an attack. When he's rescued by a Border Agent, Osamu vows to join Border. He's determined to rise through their ranks so he can one day take the fight to the Neighbor home-planet as part of Border's rare but elite invasion forces.

But Osamu must overcome plenty of obstacles along the way.

And that's not even mentioning the fact that Osamu has unwittingly befriended a Neighbor.

Computer-generated graphics (CG) are a relatively small presence in World Trigger, allowing the 2D-animated characters to shine with their bright and colorful but still natural-looking character designs. CG is mostly used for the lighting/particle effects of Triggers and for setpiece "bosses" such as particularly large Neighbor creatures. The Triggers in particular are often very pretty to look at, with their various glowing fluorescent colors and sparks that shower upon impact. My personal favorite effect is when a person is KO'd in combat, which results in their Trion-generated body (which functions as a shell to protect their true physical body) disintegrating in a burst of green-blue cubes.

Despite the flashy Trigger effects, none of World Trigger's CG sticks out like a sore thumb against the 2D animation: an issue that has plagued many other modern anime. It's refreshing to see Japanese studios properly blending the two animation styles.


The Story and the Fights

I'll admit that this is a show you will be watching more for the tension in its fights than the draw of the overall plot.

I'm not trying to say there isn't an overarching tale; there's enough story there to keep snobs like me entertained. It's just...

The fight scenes are so interesting.

World Trigger has flashy fighting moves in spades. And, to their credit, while they could easily rest on that alone to carry their combat, they don't. They also offer strategy and natural tension, which is great since a good chunk of the show is characters fighting each other in mock combat.

By far, the best thing about World Trigger's fights are the strategies.

Characters are constantly reassessing their opponents' moves based on their knowledge of the rapidly-unfolding situation. New Trigger abilities enter the mix, forcing the defenders to rethink their strategies. Characters hide with cloaking technology, only to appear and pop off a vital sniper shot and then leap from a building as the opponent's countering shot destroys the sniper's perch.

It's well-paced, and it's interesting to watch the entire cast strategize and counter-strategize--whether they're in combat with Neighbors or practicing against each other.

The overarching plot isn't quite as well paced, however. Long arcs of combat will yield only a few episodes that further the plot, which can either reveal more information about the Neighbors or delve into character backstory, but not often both.

There's also a filler arc shortly near the end of season 2; and while filler arcs are hardly uncommon for anime, the fact that it's fifteen episodes long (out of World Trigger's total 73 episodes; that's about 5% of the whole show!) is almost an unforgivable sin in and of itself. Add to that the fact that it's set right in the middle of Osamu's march to become a top-tiered Border agent and this particular filler arc feels especially maddening.

This show has an enormous cast.

And you know what? I did not mind one single bit.

That's shocking for someone who can barely keep two characters straight if their names both start with the same letter, and it shows just how well World Trigger handles their cast. In my opinion, the character designs and development are so good, they earn the story's pacing issues a pass.

World Trigger does an excellent job introducing its vast cast gradually and making sure to remind you about characters at just the right time. How they do it so effortlessly, I have no idea. But the fact is, despite the cast of good guys alone exceeding 70 characters, I recognized each and every one when they came across the screen--even if I couldn't necessarily remember their names right away (foreign names, like names that start with the same letter, are particularly hard for me. I'm just really bad at remembering names, guys).

The main cast are all very likeable if gentle-hearted souls, which means you're not going to get a whole lot of group tension due to differing worldviews. But this choice of a main cast makes sense; this is a show about teamwork, in which one ace combatant is not going to be able to carry his whole group, no matter how talented; the team, therefore, needs to actually work.

In fact, some of the important characters actually feel like an extended family, and it's always fun when they return to their home base. Whether they're teasing each other, helping each other train, or just enjoying each other's home-cooked meals, it's always a welcome change in pace after the combat's over.

But one of my favorite parts about the main cast is how Osamu's teammates all look up to him despite his shortcomings...

I'm always a fan of a coming-of-age story, and the shounen genre is literally built on tales of unlikely heroes training to become stronger. Still, I'm always pleasantly surprised at how relatable this theme continues to be, particularly for me.

To me, Osamu's consistent failures and his lacking natural prowess only make me love this theme even more. It doesn't hurt that Osamu is out of the ordinary for a shounen protagonist, who are more often "chosen ones" who merely have to learn to control their inborn abilities.

World Trigger makes it clear over and over again how perfectly ordinary--or worse, how below average--Osamu really is. Other characters, mostly those who should be his allies in fighting the Neighbors, often make fun of him or outright bully him for his lacking natural abilities. He regularly gets his butt handed to him in fights, even when he's trying his hardest.

But Osamu is still an inspiring character, not because he learns some secret or gains some incredible power... but because despite how many times he loses, despite his lack of power or talent... he keeps trying every single time. He's a kid who pushes aside how many times he gets knocked down, not out of some pride or ferocity of spirit, but just because he wants to do the right thing.

In fact, one character outright asks Osamu why he's constantly running into harm's way if he knows he can't be as much help as others. Osamu replies,

As someone who regularly struggles with feelings of cowardice, I love having Osamu as a reminder that courage means facing fears to use my strength when someone else needs me most.

Other than removing the filler arc, I'm not sure there's much I'd change about World Trigger. It's a great show with lovable characters, an impressively large cast that works, and excellent chess-like strategic fights.

That's why I was so sad to hear the World Trigger anime was no longer airing after its second season (Green, "'World Trigger' Anime Wraps Up In March"). That's no guarantee that the anime is canceled, but at the very least it'll be a long few years' wait to hear if the anime is going to continue.

I guess for those of us who are dying to see where the story goes, we'll always have the manga. I'll be sure to let you know how that holds up if I ever do get a chance to read it!

---
Photos property of their respective owners and used under US "Fair Use" laws.

Works Cited:
Review format adapted from Curtis Bell's Iridium Eye. Interested in seeing something you've never seen before? Check out Iridium Eye for a medley of movies and shows I can guarantee you've never heard of.