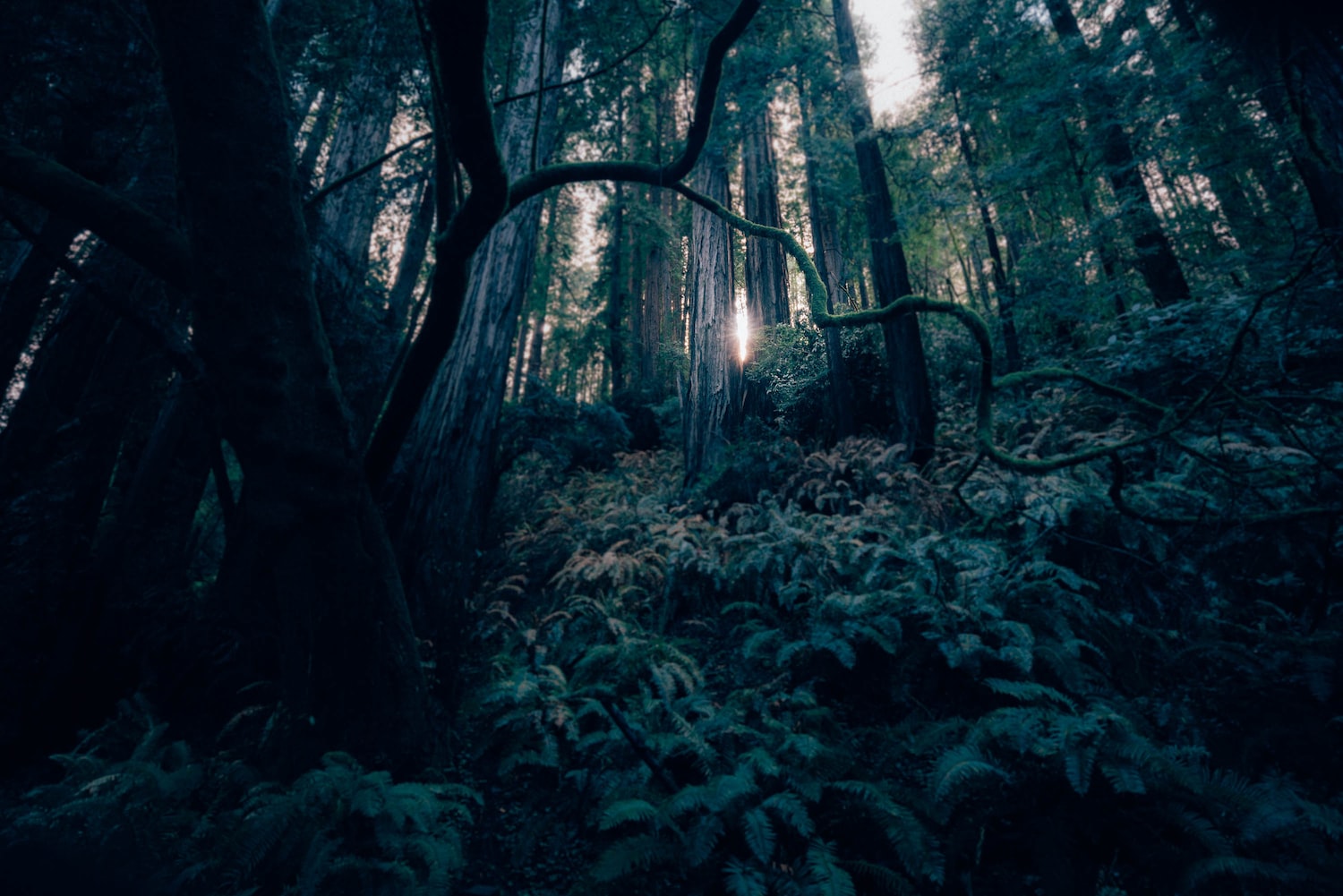 The evening had grown suddenly much cooler, bearing a cool mist that was seeping into the forest. He could feel it wetting his face and beard.

It was so dark and silent tonight. Just like—

Calm down. You know what you’re doing now.

Zaelor closed his eyes tighter and reined in his breath, forcing it to steady once more.

He heard something move in the trees, ahead and slightly to his left.

Even having done this a dozen times before, the hardest part was the wait. Zaelor forced his muscles to remain relaxed.

No small task when you knew someone was trying to sneak up on you.

All his focus was on his sense of hearing. This intruder was especially soft-footed, but no one could ever perfectly mask the soft pad of a boot sole on loam. To Zaelor’s alert ear, the rustle of a stirred leaf was just as loud as a voice. The intruder crept around the edge of the tree line surrounding their little camp.

The crunch of leaves was suddenly interrupted by a wooden, scrabbling sort of sound. Were they climbing one of the trees? Unusual, but perhaps not unreasonable.

He’d heard signs of pursuit for the past two days, but he had kept quiet to avoid worrying the children. No need for them to know, anyway.

After all, if this intruder had wanted to kill them, they could have attempted at any point over the past two days. They hadn’t. Perhaps they were simply curious; just wanted to cautiously surveil these wandering strangers. That would explain the tree-climbing. They may have decided to climb up and rest for the night, high up and out of sight.

He couldn’t have that.

In one smooth roll, Zaelor grabbed two knives from under his bedroll and sprung into a crouching position. He aimed the knife for the tree that was roughly in the spot he’d heard the scrabbling noises. Despite the dim light and dark shadows cast by their dying fire, he could see a body sitting on one of the larger, low-hanging branches in the tree. They hadn’t gotten far.

To the intruder’s credit, they didn’t move. But they did speak in a husky, odd-sounding voice, “No need to fight.” There was a lilt to their voice, an accent he’d only heard infrequently, and long ago. But where…?

“Zaelor?” came a child’s sleepy voice behind him. Isalaina, he registered in a split second.

Zaelor flung the first knife, but the intruder’s quick movement spoiled his aim. He threw the second.

A flash of reflected firelight: the intruder flicked out a sword with practiced speed.

The second knife clanged against metal and fell harmlessly away.

“Zaelor!” he heard again behind him. He heard the two boys stirring now.

Without turning, he barked, “Stay back!”

His attacks had been enough to defend the children and to get the intruder moving. The intruder was clambering higher in the tree to get away.

“Are we under attack? Is it the Scourge?”

Keeping his eyes pinned on the intruder, Zaelor quickly knelt. One hand felt beneath his blanket until his fingers brushed against his unstrung bow. The other hand was pulling his bowstring from his tunic pocket. It took only another second to pull out both, one more to bend the bow and string it.

Still too slow! The tree’s leaves had nearly engulfed the intruder now. Zaelor risked a glance away as he dove for his quiver. It was beside his blanket. He plucked out an arrow and nocked. Then he spun around. He searched the treetops for his prey.

The leaves completely concealed the intruder. There was no movement.

Zaelor continued to scan the trees, moving his eyes back and forth to catch even the slightest shadow out of place. Impossible. Nothing to see in the dim firelight.

Zaelor closed his eyes and held his breath, focusing on the sounds of the forest. It was still summer, so the trees were filled with the chirping of crickets and frogs. He filtered it out, letting the sounds shift to the background of his mind. There was also the rustle of leaves and branches, but were those from the wind or his quarry? He waited and focused.

There. It was in rhythm with the rustling of the leaves in the breeze, but he could just barely differentiate—a heavy breathing. The climbing didn’t come without the cost of exertion. The intruder was only human, after all.

Zaelor drew his bow and released, smooth and quick. There was a gasp of surprise, but when Zaelor opened his eyes—

The intruder scrambled to stay in the tree—unsuccessfully. Zaelor saw a flash of light through the leaves, then the intruder came tumbling toward the ground. They righted themselves just before they hit the ground.

The intruder rose from a crouch, standing silently before Zaelor, bathing him in a jewel-green glow. No mistaking it: the flash and glowing light was coming from a pair of wings that had sprouted from the intruder’s back. The wings were like shining stained glass.

The intruder hadn’t been struck by the arrow, but the shaft must have passed close enough to startle the intruder. Now whoever they were had no choice but to stand and fight.

The Zelméon unsheathed a knife from a sheath strapped to their thigh: Zelméon-made, judging from the glittering green jewels in the pommel. They also folded back their shining wings; one moment, the clearing was flooded with their soft green light, and the next, the wings had completely vanished.

Even now, urgency mingled with awe. That sight would never cease to amaze him.

“Don’t want to hurt you,” the intruder interrupted his thoughts. Their posture seemed to support that. They held the knife ready for a throw, but their other hand was open, palm out to Zaelor. Their whole body looked relaxed, not tensed. Either they really didn’t want to fight, or they were very confident in their fighting skills.

“And I don’t want to hurt you,” Zaelor replied coolly, “But I’d be a terrible ward if I let just any masked woman spy on my little cousin in the middle of the night.” It was the cover story he’d invented along the way. Isalaina looked the most like him, after all. He figured it was less conspicuous if he, the only adult in the group, was related to at least one of the children he was traveling with.

The intruder was indeed wearing a wooden mask that concealed her whole face, as well as a collection of nondescript green and brown clothing. Little wonder it had been hard to see her in the trees all this time she’d been following them.

“Well, you may not be a woman,” Zaelor clarified when the intruder didn’t respond. “But the exceptionally loose shirt, the obvious attempt to make your voice deeper than it is, coupled with the mask… I mean, no men bother wearing a full face-mask like that.” He shrugged.

The intruder cocked their head. “Well aren’t you a smart one?” came her unmistakably female voice.

The lilt in her voice—her accent. She’d tried to change it when she’d been faking a man’s voice, but he could hear it clearly now. It was certainly a Zelméon accent, but what region? There was a bit of the refined Zelméon capital, Závéon, in her accent, but something else, too. Where had he heard that accent before?

But he was keeping a lady waiting. “Oh, I’m smart enough to remember you didn’t answer my questions,” Zaelor smirked. “And I need those answers, or we’ll have to get into some unpleasantries. And frankly, it’s late, and I’m tired, so I’d prefer the easy way. Considering you keep saying there’s no need to fight, I’m inclined to think you’d prefer that, too. So, who are you and why are you following us?”

He saw the flash of metal and knew the intruder was going to fling her knife before his eyes could even process the motion of her throw. That gave him just enough time to adjust his bow and drop his shoulder to roll.

Unfortunately for him, he’d forgotten to shoulder his quiver earlier. He had no arrows on hand.

As Zaelor jumped back to his feet, he noticed cool air and warm liquid trickling down his left shoulder. He clutched his shoulder and his fingers confirmed—the knife had neatly sliced through his tunic sleeve, exposing his sliced skin to the elements.

Also unfortunately for him, she apparently knew her way around throwing knives. Better than him. And another one was on its way.

Zaelor rolled to the other side, away from the telltale glint that reflected the firelight. This time, he managed to roll close enough to scoop up his quiver. He slung it on his back and nocked an arrow. “Don’t interfere! You’ll get in the way!” Zaelor shouted.

Of course, once he looked up, the Zelméon was gone.

Zaelor swore and jumped to his feet to pursue.

---
[Excerpt from The Victor's Blade; all content subject to change.]