[I started writing this post and then realized it was going to be way too long to do in one go, so consider this Part 1 of my exploration of the concept of canon. Part 2 will be coming out either tomorrow or Thursday.]

I recently discovered (and have become addicted to) NerdSync's channel on YouTube. They mostly discuss superheroes in comics, but they also touch on a lot of philosophy and storytelling. One such storytelling video that caught my eye was this one: What is Canon?

The video really interested me for a variety of reasons. First and foremost was due to the recent surge of interest (or re-interest?) in Star Wars.

I'm sure most of you know already that Disney purchased LucasFilm (the film studio that brought us Star Wars) from George Lucas in 2012. While I had my fears about Disney owning Star Wars, I've had mixed reviews on the results. It wasn't as bad as I expected... except for how Disney chose to deal with Star Wars's Expanded Universe.

For many years, people had been creating content that went beyond the events of Episode VI: Return of the Jedi. And not fanfiction--I'm talking real, published comics, novels, games, and more that created an "Expanded Universe" that went well past the movies and TV series--forward and backward in time. They didn't contradict the events of the movies. They took the Star Wars universe that the movies had initially conceived and literally expanded it by adding characters, storylines, wars, history, cultures--you name it.

I only dabbled in the Expanded Universe, but I fell in love with its vast scope. I also liked the idea that, although never officially sanctioned by George Lucas, he gave some of the stories some nods of approval. But I also liked that more often, the fans had essentially formed their own canon--their own idea of what really happened in the Star Wars world. Because they loved Star Wars so much, they polished up what they deemed as inconsistencies in stories written and/or produced by Lucas. And then they added so much to it.

But in 2014, two years after purchasing LucasFilm, Disney announced that, in the words of Business Insider writer Steve Kovach, they were "rebrand[ing]" the Expanded Universe "under the 'Star Wars Legends' banner." ("Disney Is Going To Nuke All The 'Star Wars' Books And Comics Fans Have Been Enjoying For Decades")

Even as a soft-core Star Wars fan, I was mad.

I did appreciate the fact that Disney wasn't just burning all these EU media as heresies but were instead trying to archive them as best they could. And I understood that Disney wanted to be able to make movies the way they wanted to (and not be locked into following the Expanded Universe storylines).

But the fact remained that this was a slap in the face to the fanbase who had fallen in love with the Expanded Universe and worked so hard to maintain continuity in the Star Wars universe--which was no easy thing to do. In my mind, by tossing the entire Expanded Universe out and simply labeling it as "Legends," Disney took away all of the power of those stories. "They're fun and interesting... but readers should note they do not reflect the official storyline..." as Kovach put it.

"Fun and interesting stories..." but nothing more than that. Just legends. Things that never took place. They suddenly weren't part of "the official storyline."

The Expanded Universe wasn't just a collection of fun little stories that can be made into myths. The EU included stories of how Luke Skywalker fell to the Dark Side and then returned to the Light long after his fight with Darth Vader was over. They discussed how Luke found true love in, ironically, the form of an assassin sent to kill him, and the struggles their children dealt with many years later. With the EU gone... all of that was suddenly erased.

I think the best way I can show you what this all meant, for me, is to toss a link and a couple pictures your way.

Here's a snippet of an article on Wookieepedia that relays all EU information on the Zabrak species. It describes them in startling detail: biology, typical appearance, personality (both what was common for their species, as well as how others often perceived them), and even a condensed history of their people. The article is over 1,600 words long and four single-spaced pages in a Microsoft Word document: 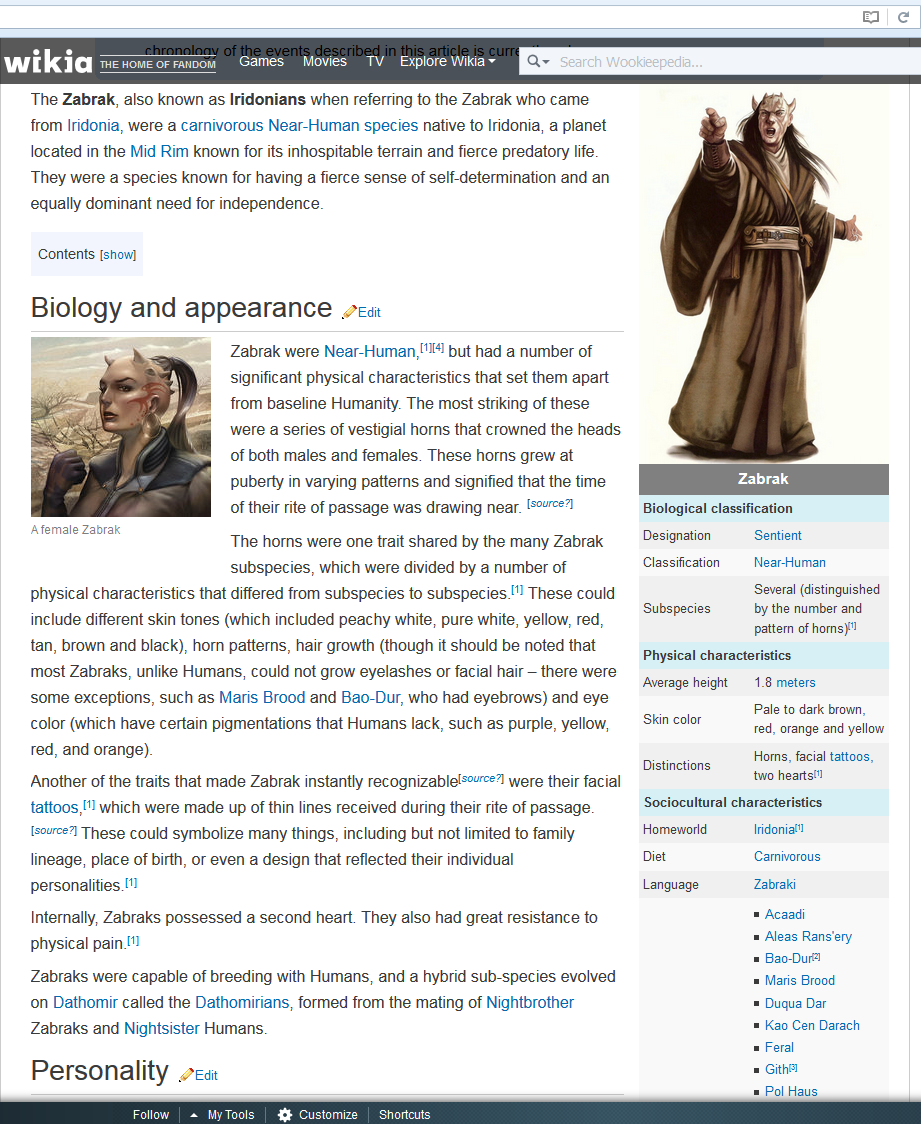 But the EU doesn't exist any more. It's no longer canon. It's just "legends."

So, here's all the collected information on the entire race of the Zabrak that is now considered canon: 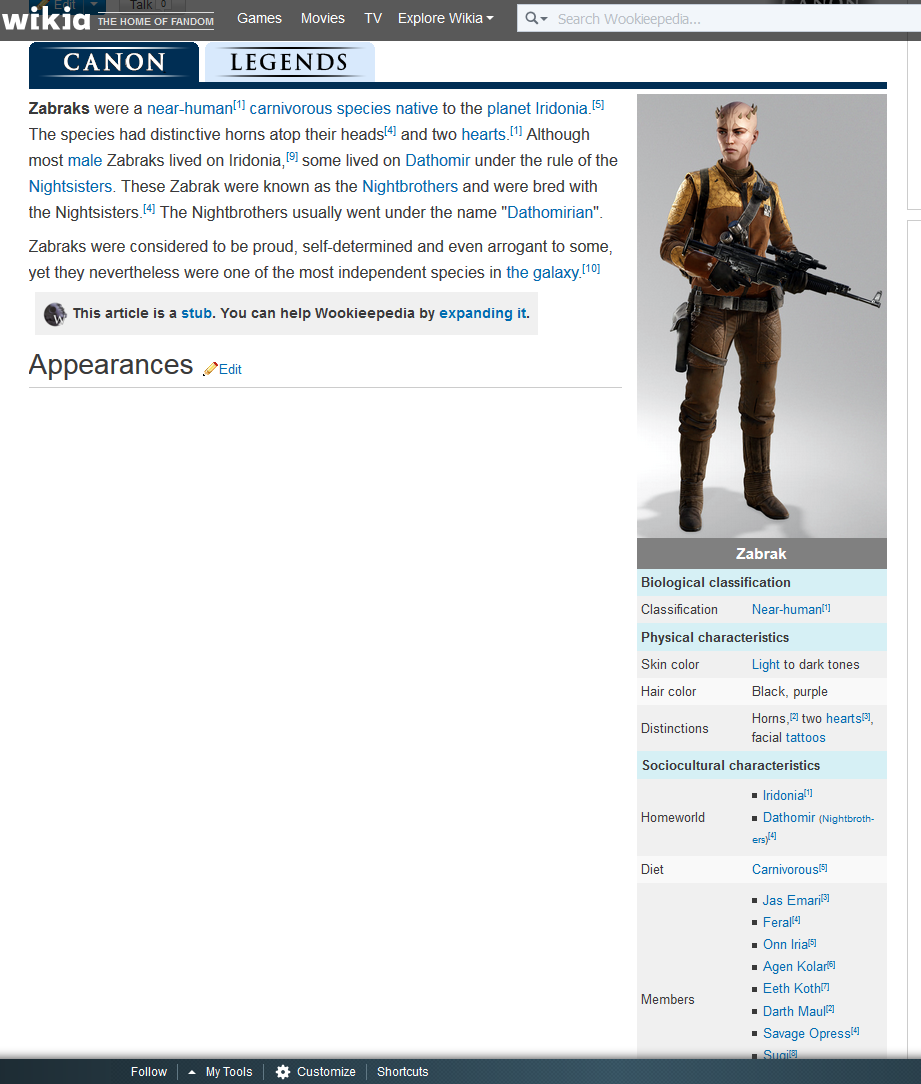 Including the text from that infobox on the side, this article is 133 words long. It's only 85 without.

If each word was a single letter, you could tweet this article to a friend--with room to spare.

It reminds me of a phenomenon in the Star Wars universe itself--a wound in the Force--the loss of something great, which sends out painful echoes of what once was.


From Him, To Him
Posted by Jeannette Jonic at 1:57 PM