I could no longer keep the title “The Golden Sword.”

I was devastated (as only a pre-teen can be) at the news. Of all things to shatter my slowly-progressing story’s development, it had to be a LEGO set. 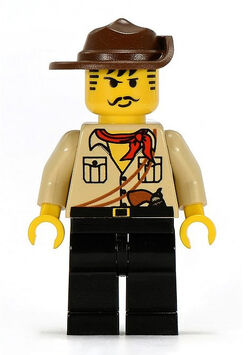 I’d been a purveyor and purchaser of LEGO bricks for years. My first set was a massive castle from the Factions series (circa early 1990’s). My more recent favorite, however, was the rugged Johnny Thunder. Johnny was an Aussie adventurer who unearthed mysteries and treasures in wild, untamed lands like the Egyptian pyramids, Amazon rainforest, and even… Dino Island? (Which was apparently the least-memorable locale of the series, since I had to look it up.)

So I was absolutely thrilled when the LEGO company released a new Johnny Thunder series in 2003, set in the exotic Far East… until I discovered that the artifact he was looking for this time was none other than The Golden Sword.

A LEGO set had stolen my story’s name! (Well, technically my friend’s story’s name, but you get the idea).

I’d have to change the name immediately. I couldn’t be sued for copyright infringement because the LEGO company had decided to pull the metaphorical rug out from under my writing career.

The problem was… I couldn’t get myself to change it.

“The Golden Sword” was perfect. It was short, direct, to-the-point. No-nonsense. It said exactly what the story was about. And what else was I going to rename a legendary blade? Not to mention I had already had the title for years. It was much more than a placeholder—it was the identity of the story itself.

But I stubbornly set about coming up with a new name (despite repeated attempts on my parents’ part to reassure me that it would not be copyright infringement if my story happened to be named the same as a LEGO piece). Ideas came and went, but nothing really stuck.

I sat down to brainstorm. I needed a list of words I liked, that sounded powerful but not overbearing, that would have good meanings for a sword’s name.

Valiant? I liked that word. But it sounded too pompous.

…What about victor? A sword that made the wielder a victor. The Victor’s Sword?

No, no. The Victor’s Blade.

That was it. That was the one.


Photo from Brickipedia. All photos property of their respective owners and used under US "Fair Use" laws.

LEGO®, Johnny Thunder®, and all related terms are trademarks of the LEGO Group of companies which does not sponsor, authorize or endorse this site. Also, honest props to the LEGO Group for having the most common sense and reasonable "Fair Play" regulations for talking about their merch.

From Him, To Him
Posted by Jeannette Jonic at 2:50 PM